You Can Totally Do That Thing (Or Maybe Not)

Angela Murray
February 25th, 2015 | GMing Advice | Printer Friendly
What do you do when there’s a disconnect between what the player thinks they can do and what the GM knows they can do?
The player is absolutely certain he’s facing an insurmountable challenge. More enemies than he and his companions can handle are pounding down the gate, and there’s no way to attack them before they burst in and overwhelm his crew. He hesitates, torn and unsure what to do in this obvious no-win situation. On the other side of the table, the GM is confused. She knows his stats make him more than capable of climbing the wall so he can rain death down on the invaders before they get inside the courtyard. Not to mention, most of the enemies are minions, meant to be squishy and reinforce how epic the heroes are.

What do you do when there’s a disconnect between what the player thinks they can do and what the GM knows they can do?

A few weeks ago, I talked about how GMs can help find the ‘Essence of Awesome’ for their players. This subject is similar, but it comes from a far more basic place. Usually this only happens with people that aren’t used to playing together much, if at all. While it can make for an uncomfortable introduction to a new group, it’s a fairly common Â problem in convention games. When the players and the GM are on different pages about what’s expected in a game, it can make for a very frustrating experience on both sides of the table. It may not happen often, but it’s a good issue for GMs to be aware of so they know how to adapt and adjust to get everyone on the same page. 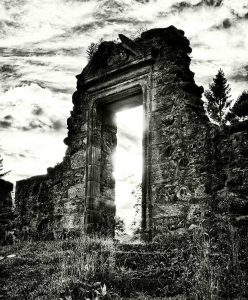 Okay, maybe this one won’t keep any enemies out anyway…

In the opening example, the player hadn’t played D&D in quite some time and was coming at his choices from a very old-school perspective. The last time he had played regularly, if something wasn’t explicitly stated in the rules, you simply couldn’t do it. He assumed that he couldn’t jump up onto the wall because it was something he couldn’t do in one of his previous games. The GM, on the other hand, was aiming for a fun action adventure with the PCs performing epic acts of heroism. Or at least something close to that. When faced with this situation, she just plainly pointed out to the player that he was playing an epic hero capable of great things and that it was an easy roll for him to get up on the wall. Once he understood that, he stopped being so hesitant and got up on the wall to start taking out the enemies on the other side of the gate.

Of course, the opposite can happen too.

Several years ago, I was in a fantasy game at Origins where the GM took great care in setting up the scenario. The game opened with the PCs returning to their employer with an artifact they had been hired to retrieve. Before they could get their payment, a much more experienced and accomplished party was allowed to jump line and go in ahead of them. Behind closed doors, but obvious to a PC that was spying on the other room with clairvoyance, those experienced adventurers were slaughtered with the wave of a hand, leaving the artifact they had brought back to be picked up from their disposable corpses without a single gold piece being spent.

The entire adventure was supposed to be the PCs fleeing from their employer and trying to foil his nefarious plans. The idea of retreating was absolutely foreign to this group of players, though. Despite the GM consistently rewarding bennies/plot points to the one player who was saying ‘Let’s get out of here!’ the other PCs insisted on busting into the bad guy’s office and trying to fight him right then and there. The GM honestly did his best to get the PCs to run without explicitly stating it. In the end, the entire party was wiped out, creating a forty minute TPK that wasn’t fun for anyone at the table. Â (As a note, the GM immediately offered to run a different game for anyone who wanted to stick around since they had paid for a four hour game. The two most stubborn players left, but everyone else stayed for what turned out to be a really good game.)

So what’s a GM to do? If the players are expecting the game to be one thing but the GM intended something else, how do you get everyone playing the same game?

Encourage Them To Just Do It — Like the first example, sometimes just pointing out how easy a task is will be enough to get the player to start treating the game like an adventure story instead of a logic puzzle. There’s a place for logic puzzles in gaming, but if you’re looking for action and adventure, you might need to nudge your players in the right direction. If they’re used to playing games with a slightly more adversarial role for the GM, it may take a little extra work, but it’ll be worth the effort.

Are You Sure You Want To Do That? — On the opposite end of the spectrum, if the players are doing crazy, stupid actions that are going to get them killed, a simple and skeptical question is often enough to make most players hesitate. “Are you sure?” is a tool many of the GMs I admire employ very well. You don’t need to give away the plot of the game, but sometimes the players may not pick up on more subtle clues that would have told them they’re biting off more than they can chew.

Be Clear and Up Front About It — Worse comes to worse, have an out of game conversation to set expectations. Whether you’re switching to another system that requires a slightly different style of play or you want to change up the tone of your game, it is sometimes necessary to just let the players know what you’re going for with the game.

Give Them What They Want — Of course, it’s also good to keep an open mind. If you realize the game the players think they’re going to play sounds like fun, there’s nothing wrong with setting aside the game you thought you were going to run for the one the game turns into.

Have you ever sat down to a table and realized that two different games were being played, even if only momentarily? I’d be curious to hear how it was dealt with and how the game turned out.