Yet Another Gen Con Review

Today is the unofficial last day to post a Gen Con review, and I did not want 2010 to go by without saying a few things about my experiences at Gen Con. As always, it was an exciting time filled with new games, new ideas, and great friends. I will do my best to give you a high level overview of all the things that went on this year, in this link-olicious review.

This year’s Gen Con was very busy for me, and it looked to be pretty busy everywhere I went.Â 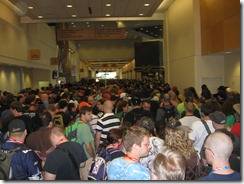 The dealer’s floor was crowded, lots of products were selling out, events were well attended (the ones I attended). Overall, the Con had a nice hustle and bustle to it. What was lacking this year, was the buzz, it is that gamer frenzy that takes over the Con, like when Vampire: Requiem released, D&D 4e was announced, or the release of the Pathfinder Core Book. The lack of the buzz did not detract from the overall experience, but its absence was felt.

Buzz aside, there were many highlights for the week, and I have grouped them below:

I did take some quality time to make my way out onto the dealers floor and spend some money.Â  Overall I think I made out pretty well.Â  Here are some highlights: 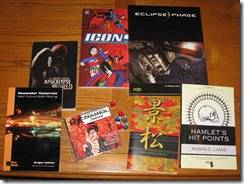 For me, Gen Con is a time where I can test drive games that I want to consider running, or just want to try out out of curiosity. This year was no different, and while there were a few games I could not get tickets for (Eclipse Phase and Diaspora) I did get a chance to play the following:

Freemarket
This is the newest game from Luke Crane and Jared Sorensen. The game is a sci-fi game that moves far past hauling cargo and shooting aliens and looks at a near utopia world where cooperation outweighs conflict. The game is very innovative, and a paragraph will not do it justice. The game’s only potential weakness is that not every group will “get it”. Luke’s running of the game was great, and I now understand why people are so excited to get into his games.

Houses of the Blooded
Last year at Gen Con, I passed up on buying this book, despite the sales pitch directly from John Wick. After getting the book and reading it twice this winter, I got into a game, to see how it played. Our GM, Holly, was great, and her portrayal of her NPC’s were awesome; a reminder to me to act a bit more when I am speaking as an NPC. Holly did a great job of showing how the HoB system, with it’s shared narrative control, can create a full session from a simple premise.Â  The game was very enjoyable including my tragic ending, with the wearing of the black.

FUDGE
I have for some time been curious about FUDGE, looking for a light-weight game system that has some flexibility to it. I was lucky enough to get into Patrick’s, Eureka! Its FUDGE session, where Patrick let a player pick a plot from Eureka at random and then he improvised the game. Patrick did a great job playing on the fly, and teaching the FUDGE rules. I am definitely getting some FUDGE materials over the next few months.

Fiasco
While I have played Fiasco a few times, and have reviewed it here on the Stew, there was a lot of buzz about the game, including from Will Wheaton. Our Gnome In Chief, Martin had a chance to play a Fiasco game with a few guys from my gaming group, in a session called Milking The System, and fully enjoyed it.

Eureka was available at Studio 2 Publishing’s booth. After a year’s work, it was quite surreal to see the book sitting on the shelf. 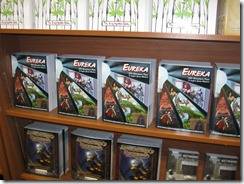 On Saturday, we held a Q&A about Eureka, where seven of the nine authors (and Gnomes) had a chance to talk about Eureka and our experiences in the creation of the book. Afterward we signed copies of the book, also incredibly surreal.

By Saturday afternoon, Eureka had sold out. It was so exciting to see the response people had to the book. My only regret, was that I was not able to find Monte Cook to sign my copy. Rest assured that at Gen Con 2011 I will have my Eureka book in my bag, and will be looking for you Mr. Cook.

Adding to the surreal-ness (if the is such a word) of the week was the ENnies. 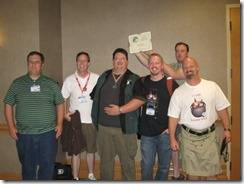 As we already announced, your votes fetched Gnome Stew the Silver ENnie. For me personally, it meant a lot to know that the advice we are posting is making a connection with you. Thank you all for your votes.

One note, after the ENnies we took a vote and decided to retrain our preferred enemy from the Halfling to the Kobold.

One of the great things about GenCon is the chance to meet some of the bloggers, podcasters, vendors, and designers that you normally cannot meet, except for once a year. Just a few highlights:

In all this was an incredible GenCon for me, and likely one that will be hard to repeat in the future, but that’s ok. Every Gen Con is unique, and I look back at all of them, as a unique experience. I am looking forward to going again next year, after I rest and recover a bit, and read all those great books I purchased.

If you want to see a few more pictures of the Gnomes in action, go to our Facebook Page.

If you went to GenCon, share some of your prized purchases, games played, chance encounters, and memorable moments.

7 Responses to Yet Another Gen Con Review