Why Polyhedral Dice On A Deck Of Cards Will Never Work… Or Will They? 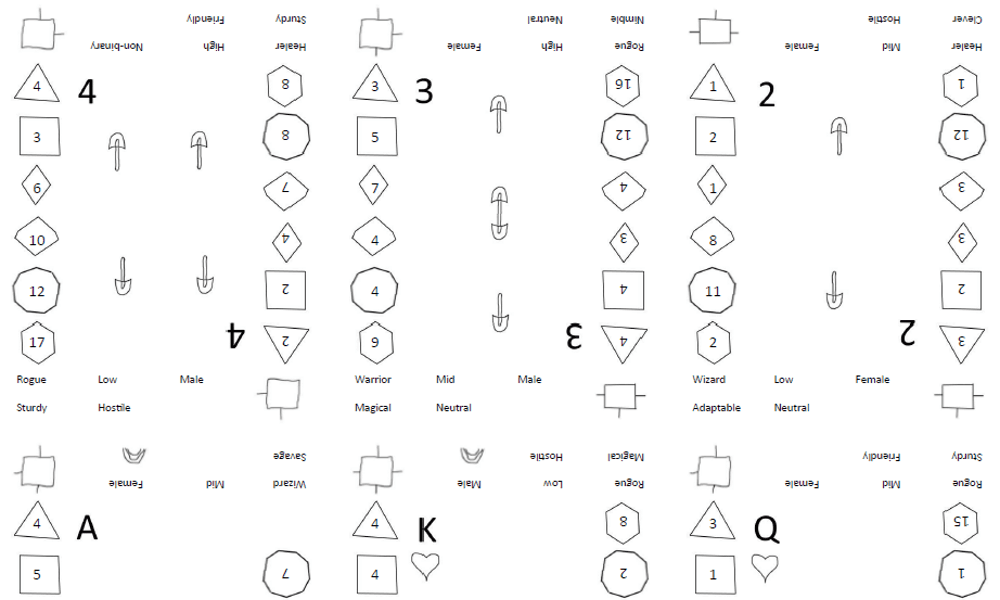 A few months back, I was reading a post over on Tenkar’s Tavern about one of Tenkar’s most/least favorite topics and I discovered a link to a kickstarter I had missed from back in 2015 (funded, but still unfulfilled from what I gather). It was for “Deck Dice” – a standard deck of playing cards that also act as a full set of polyhedral dice. I had two initial thoughts on this:

So why did I think this concept would never work? Well, it boils down to the math. In order to properly simulate a polyhedral die, you need to have a randomizer with an even multiple of the number of sides of the die. So to simulate a d4 properly, for example, you need a deck with a number of cards that’s a multiple of 4. In order to do this for an entire set of polyhedral dice, you need to have a number of cards that’s a multiple of the Least Common Multiple of 4, 6, 8, 10, 12, and 20. If you can’t remember how to find that off the top of your head and don’t want to look it up, you have to find the product of the largest group of like factors across all the dice, which ends up being 2x2x2x3x5=120. So the only way to perfectly simulate an entire set of polyhedral dice with a deck of cards is to have 120 cards.

There are some ways around this, but each has its own issues or quirks:

The kickstarter that Tenkar had referenced combined two methods. First, they added 6 extra cards to a deck and they used two decks. That gave them 120 total cards, allowing them to perfectly simulate all types of polyhedral dice. Which is excellent. But it made the decks completely useless as an actual deck of cards, so what was the whole point of the product? And then you still have the “using only one of two decks” issue, although in this case, as long as each individual deck of 60 has a complete distribution of 4s, 6s, 10s, 12s, and 20s, at least only the d8 suffers for it, and not that badly.

But, after kicking it about a little, I think I have a better solution: make all the cards symmetrical, so it’s impossible to tell when it’s right side up and then put different rolls on the left and right side of the card, thus which side of the card is up when you draw it will give you different results. 108 cards means that only 4 or 8 blanks need to be left in for any given die, and since each card has two rolls on it, that’s 2 or 4 cards. Here’s what a sample card might look like:

So what’s all that extra junk at the top and bottom? Well, I had some leftover space, So I added a bunch of other fun stuff. There’s a generic fantasy class (Healer, Rogue,Warrior, Wizard) , a generic fantasy race attribute (Adaptable, Clever, Magical, Nimble, Savage, Sturdy), a general level (High, Mid, and Low), a reaction (30% Friendly, 40% Neutral, and 30% Hostile), a gender (M,F, ~2%Non-binary), a little rainbow symbol(~15%), and a random dungeon room.

So, there you have it. There’s my attempt at how I would make a set of Polyhedral dice cards, and as a bonus, it only took me about a month and a half – and everyone can download a free printable PDF below! On the other hand, the art is absolute crap, there are no faces on the face cards, and there’s no back, so you get what you pay for.

Of course, I could always scrounge up a few hundred bucks for some pro layout assistance and art, fund it with my own kickstarter and put it up in a print on demand venue. Anyone have opinions and feedback while I mull that one over? Don’t be shy.

P.S. If you find the concept of dice on a deck of cards interesting, here are a couple other ones that are available. If you know of any others, put a link in the comments.

3 Responses to Why Polyhedral Dice On A Deck Of Cards Will Never Work… Or Will They?