Seven years ago, I started a system-neutral GMing advice blog, Treasure Tables, and went on to post more-or-less daily for the next two years (2005-2007). There weren’t that many gaming blogs in 2005, and I didn’t really know what I was doing, but writing TT was a blast.

Until, after two years, I burned out hard. Daily posting is tough (I even did weekends, most of the time) and it took its toll. I closed the site, but the itch to write GMing material didn’t go away. In 2008 I took the best suggestion made by TT readers when I announced the site was closing — recruit other authors to share the load — and ran with it.

I reached out to one friend and several folks who I only knew through their excellent contributions to Treasure Tables, asking if they’d like to start a team GMing blog with me, and was pleasantly surprised when they all said yes. The outcome of that flurry of emails was Gnome Stew.

I left TT online in its final state for the next five years. All the old content was still accessible and still free; all comments were still there, though new comments couldn’t be made. But that state of affairs never really sat right with me. 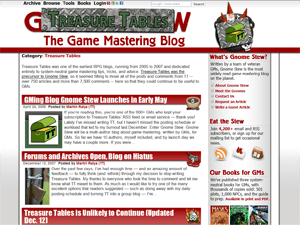 When our own John Arcadian took on the role of Technical Administrator here, and I’d had a chance to see what he could do, I asked him if it would be possible to move everything from TT over to the Stew. He said it was possible, though not without some potential kinks, so I put the question to the gnomes. Everyone liked the idea, so a little while later, here we are: You can now access all TreasureTables.org posts right here on Gnome Stew.

For the time being, there are two ways to access this content, which is all system-neutral and GMing-related, just like Gnome Stew: through the Archives drop-down menu or through the Search box.

The Archives menu now has a new category, Treasure Tables, that leads to the category containing all TT posts. To make it clear that they’re not Gnome Stew content, they’re authored by “Martin Ralya (TT),” have a different header and sidebar image, and are preceded by a brief intro explaining why they’re here.

John has worked hard to make this happen, overcoming a number of hurdles, and he’s done a bang-up job — thank you very much, John! One thing that was important to me is that old links to Treasure Tables content that live on around the web not suddenly stopped working, and John made that happen, too: All old links to TT will just redirect here to the appropriate post on Gnome Stew.

Treasure Tables means a lot to me, and I’m really glad it has a new home here on the Stew. I hope you find this new-old content useful and enjoyable!