How will your villain manifest their power this time?

Similar to our Brass Knuckled villain from the previous article, we’re looking at a foe who engages the characters directly, but this time our foe will be slightly more subtle. Even though villainous fingerprints are all over the scheme, there’s at least some plausible deniability. 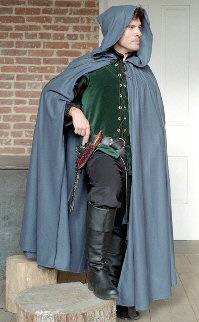 Like our brass knuckled villain, the Cloaked Blade strikes directly and violently at the PCs. Unlike the Brass Knuckled foe, something keeps this villain from claiming responsibility for the attack–at least openly. Perhaps the PCs are being protected by someone the Cloaked Bladed cannot cross, someone of similar power to the villain. (This often happens in noble intrigues; when the PCs prove too effective, the Cloaked Blade may decide to remove their opponent’s exceedingly effective tool.) Sometimes a villain conceals his hirelings’ ties because the PCs are feared; even if the PCs suspect the hirelings’ connections, they might not be able to act without proof.

MO: Their forces tend to strike from the shadows, often direct and violent like a Brass Knuckled villain’s minions. What differentiates them is the effort to conceal the identity of the attackers or to obscure the link back to the villain who hired or commanded them.

Traits: Cloaked Blades come in many varieties. Some Cloaked Blades are the authority in the region, but don’t want to suffer blowback from a failed strike. Many others are strong but illegitimate; the master of a thieves’ guild might hire an assassin to deal with the PCs because he doesn’t want a reputation for murder. Other Cloaked Blades are entitled, or passionate; they act directly because that’s what their feelings demand, but they conceal their efforts to avoid repercussions.

Advantage: Using a Cloaked Blade as your foe introduces a small mystery–often quite limited in duration, as figuring out who hired the dockworkers isn’t usually that complex, or [in fiction] the person who hired the thugs is distinctive in an unaccounted for way, giving the PCs a lead. Despite the relative ease of the investigation, it still takes time and effort. If the heroes are on a quest, they might not be able to investigate the strike right away.

Other times, the PCs will have a strong suspicion of who the villain is–but the cloaked nature of the villain’s strike prevents the PCs from taking action directly. The worst case is when everyone knows that the villain struck at the PCs, but the PCs know that if they strike back without ironclad proof, they’re the ones the law will penalize. Again, this can be a mini-mystery–the PCs can collect clues and run down documents establishing a chain of evidence. If they can do so secretly, the villain might not expect their counterstrike!

Relative Power: Cloaked Blades can be all over the power spectrum relative to the PCs. One of the most common conditions is a very powerful villain whose power is checked by his peers (or his superiors, such as the king in a game full of noble intrigue). When such a powerful villain is revealed as the foe, the PCs will likely turn to seeking out allies powerful enough to dissuade the Cloaked Blade.

Sometimes the PCs’ strength is what forces the villain to conceal his strike. When that’s the case, the PCs may enjoy a cathartic raid on the villain’s stronghold as soon as they figure out who is responsible. In both cases, the Cloaked Blade’s efforts at concealment build in an opportunity for the PCs to solve a short mystery, which can be a nice counterpoint to monster-of-the-week and deep intrigue games.

Turned Tables: Cloaked blades vary widely; the reason the villain chose to conceal the link to the henchmen suggests an approach for the PCs. For example, the haughty noble that the PCs can’t strike back at directly might be humiliated if it becomes known that they interacted with lowlifes at all. If a cloaked blade concealed hiring minions because they aren’t strong enough to face the PCs, the players can look forward to a fight they can win, if only they can arrange it.

Cloaked Blades in Your Games

Interestingly, in comments very few of you used Brass Knuckled villains as the main threat–they were often enforcers for a more subtle opponent. I’m curious to see if the same will hold true for Cloaked Blades… or if their subtler nature finds more resonance with the scheming GMs who read the Stew.