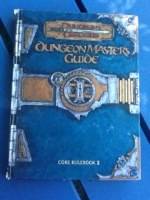 Of late I have extolled the virtues of earlier editions of Dungeons and Dragons.

This has delighted our gnome-in-chief, especially, who like many other gamers, is rediscovering what Old School gaming is about.

And it served as a touchstone for those like me, who have more gray hairs than experience points (my current photo on this site indicating the contrary).

But it also vindicated those folks who never stopped using the Chainmail, Basic, Expert or AD&D rules sets and find now that the creators and designers of the next iteration of the game are trying to appeal to their sensibilities.

But I would be remiss if I didn’t call out something of a more recent vintage, something that has been my security blanket since it was published.

Contained within the 2000 Dungeon Master’s Guide are 12 magical pages. In my mind, they are the best 12 pages ever produced for D&D. And not just for Third Edition and its many d20 progeny (Wheel of Time, Arcana Evolved, Iron Heroes, Pathfinder, et al). If your game uses hit points, armor class and a bonus to attack, the charts on these dozen pages can prove handy, if not indispensable.

Of what do I speak? The NPC Statistics section contained within Chapter 2 of that DMG. 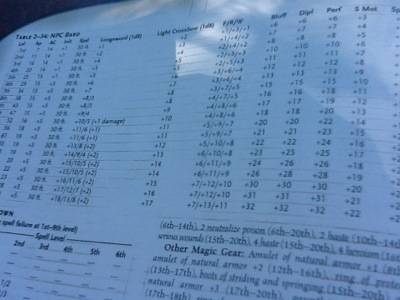 Here we have random generators for creating NPCs of every class, alignment and the staples among fantasy races. There are more tables for generating the stats for an NPC of every class for 20 levels. There are lists of potions, scrolls and gear, suggestions for weapons, magical and mundane. And best of all, every skill and feat has already been selected.

That last reason is what makes it superior to the charts in the 3.5 DMG, which assumed the GM would want to select those feats for herself. That was a poor assumption, for two reasons. First, feats and skills often affect the other math in the charts. And two, while I may want to swap out a feat here or there to customize an NPC, by golly, I don’t want to have to figure out a whole feat tree for a character who is 10th level and above.

Most of all, this is essentially a bestiary for humanoid races.

Need orcs or bugbears that scale up with the PCs? Yeah, we got ’em right here.

Need to know what potions that elf monk from the Forest of Nye was carrying in her satchel? The answer’s on Page 52.

Does your party need an aasimar paladin babysitter to escort them through a section of the Temple of All-Consumption? Race adjustments begin on Page 57.

Best of all, there is mostly a universal feel to the selection of equipment and weapons for each character class. I’ve seen it said that this is a weakness of the charts, this sameness, that every fighter you face will be the same. Perhaps. But I happen to see this as a strength. Certainly, it only takes one tweak on your side of the screen to make a particular NPC distinct to those on the other side of the screen.

Besides, the uniqueness of the play experience comes from the quality of the adventure you are presenting, not from the statistics of a particular NPC.

Moreover, the universal approach expands the charts’ use beyond this particular edition. In the broadest sense, the math works. You can drop these NPCs in other games — I’ve had particular success with Basic/Expert and Wheel of Time, but there’s no reason they won’t work in others, as well.

Even if all you’re using is the flavor of the NPC, these charts can prove useful. In a system light game, maybe it’s enough to know that the ranger who stepped out from behind that tree carries a composite longbow and a quiver full of magically enhanced arrows, or that he can call an obsidian steed with a magical figurine he has tucked into his belt.

Coupled with a random generator of random NPC personality traits or appearance (or, if you are so blessed, with a copy of Masks: 1000 Memorable NPCs for Any Roleplaying Game), then you have the tools you need to flesh out the next GM-run character.

Now that I’ve shared my 12 Magical Pages, what portion of a given rulebook is essential for your game. Let’s share and discuss them in the comments below.