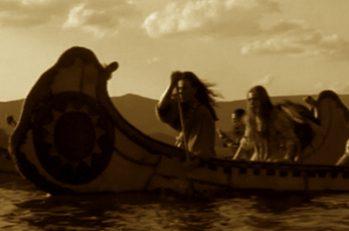 In the James Fenimore Cooper novel “The Pathfinder, or The Inland Sea,” which is one of the Leatherstocking Tales, the party sets out for Fort Oswego on Lake Ontario.

The group that accompanies the Pathfinder, master of the long rifle, nearly sounds like the quintessential adventuring party. (There is the scout, Arrowhead, his wife, Dew-of-June, the wise warrior Chingachgook, the old salt Charles Cap, a freshwater sailor Jasper Western and the fetching Mabel.)

Early in the trek, they face a dilemma when they reach the falls of the Oswego River. They can either pull over and portage, but at the cost of a considerable loss of time, or take the falls in their birch bark canoe.

For the Pathfinder, of course, there is only one answer, they must shoot the rapids (and, in the process, have a bit o’ fun at the old salt’s expense).

The lesson is clear. While on the journey to adventure, it is no place to “play it safe.”

Some players, of course, are adverse to risk. Whether this is the learned behavior resulting from GM “punishments” for hasty action in the past (“What? You failed to check all four corners of the door frame? Well, you set off the trap, my friend.”) or a desire to preserve their beloved character’s life at every turn, who can say?

But I think an adventure is best served by players taking bold action. It’s up to the GM to adjust accordingly and give everyone a reasonable chance at success – even if they aren’t experts at the task.

(After taking the canoe over the falls, Pathfinder confesses to Cap he isn’t a superior paddler. But we made it, right? We took on 14 cups of water instead of 10, so what the hey!).

Being a facilitator of bold action has two main benefits:

So, next time you design an encounter, think about giving your adventuring party a chance to “shoot the rapids” (so to speak). It just might be the springboard you need to catapult into a memorable adventure.

Because after the falls, there’s a war party massing on the opposite shore …