January turned into a whirlwind for me shortly after Wizards of the Coast announced its partnership with One Book Shelf to launch the Dungeon Master’s Guild.

And as quickly as I could manage, I had uploaded the DM’s Kit: On the Trail of Tyranny to the site. 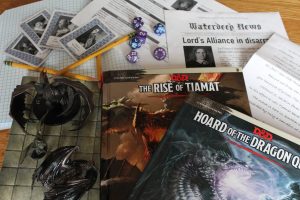 One Book Shelf, which you probably recognize from its flagship digital marketplaces DriveThruRPG and RPGNow, also manages the DMsGuild.

DMsGuild is like those other stores, except the content must use the Fifth Edition rules of D&D, and if it includes setting material, be about the Forgotten Realms campaign setting.

As it happens, I had been keeping good notes while my gaming group took part in the D&D launch adventures, Hoard of the Dragon Queen and the Rise of Tiamat. And not being content to run the adventures simply straight from the books, I had, over the course of time, created quite a few handouts, props and side quests.

Some of those campaign adventures I had shared with Facebook posts or in related articles here on Gnome Stew. From those, some folks hadÂ suggested that I collate that material and make a pdf product for the DMsGuild.

Though I had kept digital backups of everything, I had one big task ahead before I could publish. Namely, I had to scrub the documents clean of anything — mostly images — I didn’t have the right to use in a published document. (Hey, it’s OK to snag stuff off the internet and print it out for your personal use. But putting it in a product to sell, that’s another matter.)

And that included, strange as it may seem, a lot of related maps and images (such as the wonderful illustrations that Bryan Syme produced for the books) from Wizards of the Coast. It would have been wonderful to have Bryan’s portrait of Frulam Mondath, for instance.

I did scour the free artwork resources Wotc has provided to jump-start the DMsGuild. As wonderful as the selection is, few of them really applied.

And for those images that were in the public domain, I had to go back and properly cite them. While nothing requires this, it does seem like good manners.

All told, that was the most time-consuming. If I were to do this again, of course, I’d keep a closer eye on such things. But who knew that something like the DMsGuild was even in the works?

This production process is two-fold. I own a Mac, so I use Pages for creating documents, including pdfs. Pages is not as snazzy (or as expensive as, say, using Adobe Creative Cloud), but it has the basics. Nor does it have a clutter-free bookmarking tool that many Adobe products can insert, but for a breezy 50-page document, it will suffice.

Â Namely, I had to scrub the documents clean of anything — mostly images — I didn’t have the right to use in a published document.Â
I used the templates available at DMsGuild to find the suggested fonts and document design (though in retrospect, these were really secondary concerns). Those templates do have the boilerplate legal notice needed to publish at DMsGuild, so it’s worth downloading those for that, at least.

Maybe it’s a matter of perspective, but I look at DMsGuild as the place where enthusiastic GMs can self-publish. In other words, it’s a place for amateurs as well as professional publishers. Not everything there has to have the bells and whistles of professionally published documents. Sure, you should do your best to make it look neat, but hey, if your “art director” is an amateur artist with a box of crayons, don’t let that stop you.

As with anything, proofing a document can make a difference in its readability. So, what came up from my page proofs? A lot of sentence fragments that had to be fixed, for one thing. Misspellings of one sort or another. (So help me, it doesn’t matter how much of Lords of Waterdeep I play, I will never be able to spell Laeral Silverhand correctly). And paragraph construction that were fallacies in logic (the sort of snags our own Gnome proofer often catches in my posts).

The document uploader is fairly straight-forward, though I went through it twice before I got it right. Some things to have in mind before you start the uploading process: a) set your price; b) have your product description already written –Â and proofed; c) have a separate file that is just the cover of the document; d) and patience with the uploading sequence.

Lastly, it doesn’t hurt to shake the bushes and tell people that you’ve just uploaded your first DMsGuild product. Social media can be great at that, especially if your friends can refer the product to their friends. That starts a word of mouth chain. It’s the best kind of advertising.

One of the side benefits is the fact that you’ll widen your own circle of contacts in the process. Â