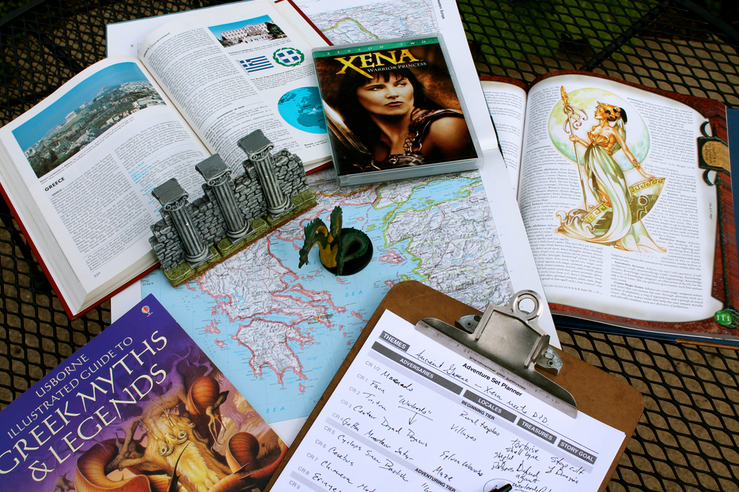 Trying to plan an upcoming adventure arc or just looking to run a handful of sessions along a common theme?

Let me suggest that categorizing the various thematic elements is a good first step.

To demonstrate this process in the article, we’ll assume I’m putting together an adventure arc set in a mythological ancient Greece.

A pdf of the worksheet I used is available for download GS_ADVENTURE_SET. As a brainstorming tool, filling out this worksheet can be a useful way of bringing a theme together.

List the monsters and adversaries the adventurers are likely to face, grouping them in relative power levels or tiers.

For a game like D&D or Pathfinder, it’s easy enough to categorize them by hit die or challenge rating. But even if the game isn’t level-based, it’s still a good idea to sort them out by power.

In the example, the classic mythological monsters are the centaur, minotaur, satyr, cyclops, three-headed dog, medusa and the Erinyes, along with some others. I can tell at a glance that these are all mid-level monsters, what I consider the top end of the beginning tier or squarely in the adventuring tier.

By noting this, I’m able to be informed about my next step. If this is a campaign starting at 1st level, then I’m going to need to brainstorm on some thematically appropriate monsters and adversaries for those early levels or I can set these adventures in the middle level — either as a short arc or adapt it for another game, entirely.

(For d20-style games, human and humanoid monsters and NPCs always scale well. I can take a nod from the “Xena” TV show and label every low-level bandit band “warlords” and cover some ground with that. I’m also intrigued by the idea of the maenads, drunken revelers and reavers of Dionysus-worshipers who killed interlopers with their bare hands. I don’t know exactly how I’d utilize them, but as humans they can fit where needed).

It also means that if the goal was to have higher-level play, then either the classic monsters would need a power boost or I’m in the “walking with the gods” territory. These are good things to keep in mind as we work on the next section.

Greece is such a picturesque country, with rugged terrain, green woods and access to the sea, not to mention the fact that photographs of every ancient ruin are only a Google search away (handouts!).  Pick any spot and it’s a great adventure site.

Generally, I’m thinking villages and wooded hillsides for the beginning tier and saving the great city-states for the champions tier (though, an all-city-state setting, say in Athens, would be a compelling setting for an entire arc). Of course, there would have be some type of maze or maze-like ruin for the minotaur (why else have a minotaur?).

One idea I’m certain I’d like to run is a “lost world” scenario set on a secret island in the Aegean. But instead of dinosaurs, it could be populated by all those classic monsters in the mid-level.  Not only would “survive the island” work with a classic fantasy adventure, it has potential should I decide to run a modern game, with characters as castaways or adventurers marooned on this island of mythological throwbacks.

Sometimes the best adventures begin as a quest for a specific treasure, such as Jason’s search for the Golden Fleece, so this could be a starting point if you wish. But I tend to brainstorm for items that are level appropriate.

For our example, I’ve jotted down tortoise shell lyre, shield of Perseus, and Apollo’s laurel wreath as beginning level treasures. The classic monsters could be guardians of wondrous items that enable the adventures to either solve the mystery of the island or find a way off. Then, then for high-level play there are Olympian-styled treasures, such as the forge of Hephaestos, the Wheel of Fire that holds Ixion, or the nectar of the gods, ambrosia.

At this point I’m not plotting out entire stories. But I am thinking about the types of adventures that we could have.

Perhaps it could be stopping the Maenads and the cult of Dionysus. Maybe the chariots of Artemis and Apollo have been stolen and must be retrieved. Or maybe the characters are swept up in a war between Sparta and Athens and are dispatched to achieve a war aim for one side or the other.

Getting the players involved in this point can be useful for mapping out story goals. Explain you’re thinking about an adventure track using these monsters from a particular theme, and ask them for what types of stories might appeal to them.

If you’ve had any experiences good or bad with this or a similar approach (or if you just geek out like me about adventuring in ancient Greece), please share them in the comments section.