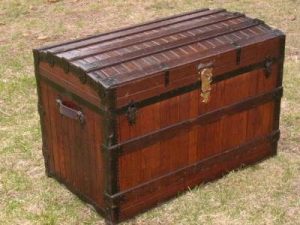 If you’re like me, you pack too much stuff for your face to face games. Oh, we all try to bring just the essentials, but then we still throw in extra stuff, “just in case.” I know a GM who uses a rolling luggage carrier for all their rulebooks. But what do we really need?

Now, I’m not the first person to address this issue. Two great articles that have appeared on this site are:

So the ground has been trod, but hopefully I can bring something new to the topic. My goal was to boil things down to the ABSOLUTE minimum needed to play, without sacrificing the experience. I also wanted to keep things as light weight as possible. Obviously, some of my own preferences as a GM will reveal themselves. However, hopefully this list will get you thinking about your own GM kit.

DEFINITE ITEMS
1. Pencils – players don’t usually bring them.
2. Small pieces of paper or index cards – Great for making character name tents. This helps me a lot during play. They can use the others for their own notes if they like.
3. Dice – I’ll put in two sets. One for me, and one for players to share. If the players’ dice set is mismatched, all the better. It is much easier to tell a new player to “roll the green one” rather than “roll the d8.”
4. Tokens – I use tokens rather than minis. I print out 1 inch by 1 inch square pictures of PC’s and NPC’s, glue them to some cereal box cardboard, and cut them when dry. These are almost free to make, and ultimately customizable. You can include a great diversity of character types, and print out the big bads just a little bigger to scare them. We all love our minis, but for travelling light, tokens work just fine. Tape or glue a penny on the bottom if you need them to be a bit heavier.
5. Character sheets – I have a standard document of pregens that I’ve used over and over. I just print new ones before each gaming session with a new group. Players can use them to keep their notes right on them. Don’t feel like you have to represent every race/class/level combination. Have enough of the standard character types for your game. If it is a long running campaign, then you can introduce more individualized characters. For a one-shot, people just want to play an elf or a wookie.
6. Session notes – This is your workhorse. Make sure you have enough information for your NPC’s (combat stats, spells, etc..) and any other needed information. You’ll be surprised how light this document can be. Using a two column page set up, I can run a four hour game with just the front and the back of one sheet.
7. Maps (sorta) – You can pack maps, or print them out ahead of time. Terrain is great, but heavy and bulky. I’ve used Jenga blocks as well, though they tend slide around as players reach for dice and figures. If you want to give yourself even more flexibility during play, consider just packing some 11″ X 17″ paper and toss a few crayons into your box or bag. Then just draw out a map as the players reach those areas. Sure it isn’t fancy, but it allows players to create some of the world in their minds. Novels do it all the time. And there is nothing wrong with just playing on a blank table. Your medeival forest awaits.

HEY, WHAT ABOUT…..
1. Rulebooks – They’re heavy. Consider writing any “cheat sheet” notes on your session notes. Also, certain rulebooks may be legally available in pdf form, and you might consider using them on a tablet or phone. You may not even need that, if you use the secret weapon.

Here it is, revealed after these many years. Are you ready? Suppose you’re asked whether a spell or a skill

can be used in a certain manner, and you don’t remember. Simply say these four words:

Done. You can always double check the rule for next time. If the request is too much, say:

“Probably not in this situation.”

Those two phrases take the place of several pounds of rulebooks.
2. GM Screen – Roll your dice behind your hand. Hide your session notes under a piece of paper.
3. Poker chips – These make great “condition” indicators or can be used for “action points” if your system uses them. Whether you include these or not will depend on your system or style of play. To save weight, cut some circles out of different color paper.

CONCLUDING THOUGHTS
Some folks may want an even leaner kit than I’ve described. And some folks may need a little more. Either way, you may want to use this list as a starting point, adding and subtracting to taste.

Just remember, if you pack it, you carry it.

What did I miss? What can I leave out? Share your thoughts below.