Throw a Wrap Party and End Your Campaign in Style 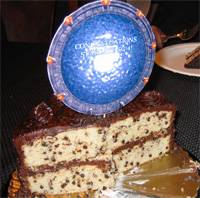 To commemorate the end of my group’s two-year Stargate SG-4 campaign, our GM, Don, threw a wrap party. After we finished up the tail end of our previous session (which had carried over), he disappeared for ten minutes while we took a quick break before diving into the finale.

When he ushered us back into the dining room, we found several surprises waiting for us: a Stargate cake, topped with a cardboard stargate that read “Congratulations Stargate SG-4,” three plaques commemorating our two seasons of adventures along with a desert camo Stargate cap for each of us. It was totally awesome.

Not only was it awesome, but it made me think that every campaign should end with an event like this.

Particularly if you’re planning ahead for the end of your campaign (a topic covered in the free TT PDF How to End a Campaign: Six Approaches), I highly recommend considering this idea. Don put a lot of work into the gifts he gave us, but you could put in less work and still get good results.

Just like giving gifts to your players earlier on in the game (a post, incidentally, inspired by this same game — Don gave all of us SG-4 patches at the start of this campaign), little things like this go a long way to cementing your game’s place in your players’ top ten list — and most importantly in making the campaign feel special.

To give you an idea of how this turned out, here are a few photos from the SG-4 wrap party. 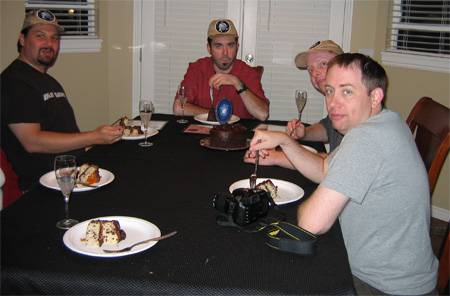 From left to right, Jaben, Sam, myself and Don enjoying our starcake. 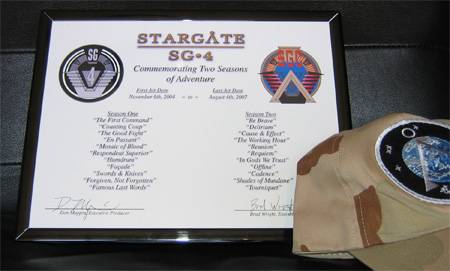 A closeup of my commemorative plaque and Stargate cap. It might be tough to see, but the plaque lists the “air dates” for our campaign, plus the names of every episode. 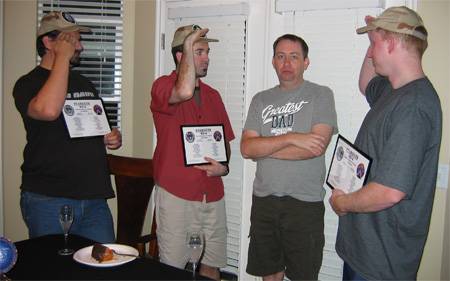 The three of us saluting our GM, who’s not wild about pictures. Again from L to R, Lt. Dave Green (Jaben), Mr. Amadi (Sam), Don and Maj. Aaron Decker (me).

We didn’t actually finish the finale — we stopped about halfway through, too tired to keep on trucking (we’re getting old). It’s going to rock, though, and I feel completely comfortable saying this now: Thank you for an excellent campaign, Don, and for going the extra mile to throw this wrap party and give it the best send-off of any campaign I’ve ever played — and thank you to Jaben and Sam for being kickass teammates.

Have you ever thrown a campaign wrap party like this, or otherwise commemorated the end of a long-running game with a special event?

(I’m out of town on business from Tuesday, August 7th through Friday, August 10th, and I most likely won’t be able to check in while I’m away. There’ll be a new post every day, as always, and I’ll catch up on comments and the forums when I get back. See you in a few days! — Martin)