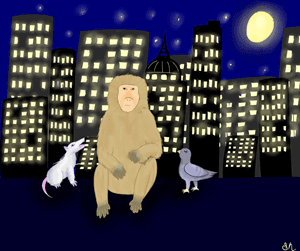 City games often focus on the human element or the supernatural for antagonists. Animals are often overlooked, but can be exceptionally clever and can be foes, allies, or adventure hooks as well. Here are three animals for your city campaign. There are a few variants of each to make them easier to fit into your particular game.

Animal: Depending on where your game is set, the baboon has either wandered in from the wild or escaped from captivity as a zoo attraction or an eccentric pet. With no pack mates, the baboon is wary and paranoid, moving in stealth, inspecting areas carefully before entering and constantly looking about for aggressors. The baboon is also adept at long term planning and has explored many blocks of their city home and prepared several small bolt holes and nests, complete with supplies and non perishable food and water. Despite the fact that typical baboons are mostly herbivorous and don’t often attack and kill humans, this one has taken to attacking and partially devouring people. This may be because it feels cornered, is short of food, or some other reason, who can say?

With intelligence: The baboon’s lairs are more elaborate, maze like warrens fully stocked with supplies, some even with electricity and scavenged mini fridges to keep food preserved longer. It’s main lair is near a small camp of homeless, with which it often shares it’s spoils and which it will alert if danger is near. The baboon’s victims still seem random, but careful investigation reveal that they were all guilty of some crime.

Supernatural: The baboon is an avatar of Thoth, or a similar deity. It stands as judge and backs up it’s rulings with magical powers. Criminals it punishes are likely to be guilty of severe crimes and unlikely to be dealt with by normal systems. Though it’s victims are still often murdered, the method will be linked to their crime.

Animal: The opossum loves to play pranks and tricks. It is a master at breaking and entering and moves items about, leaves nasty surprises, and steals items. Generally these pranks aren’t harmful and don’t result in loss of valuables (aside from the money it takes to launder a handful of fish guts out of your sheets) but are more annoyances. At each scene, the opossum leaves a few buttons, likely stolen from some grandmother’s sewing room, or another calling card appropriate to your game.

With intelligence: The opossum’s pranks are more elaborate, everything from the “bucket over the door” and “mailed glitter bomb” tricks to complicated Rube Goldberg devices a la Home Alone. While the opossum itself isn’t interested in wealth or other aspects of his talents, his skills are invaluable and he can likely be bribed for information or burglary jobs in return for helping him pull off large scale pranks beyond those he can handle himself.

Supernatural: In myth, opossums are a fertility symbol. Likewise a supernatural opossum in addition to being an extraordinary prankster makes those near its lair more likely to conceive (intentionally or accidentally). This ability can be a boon or a nuisance, depending on the circumstances.

Animal: The pigeon is a thief and a hoarder, stealing baubles, small exciting items like keys, jewelry, or even small electronic devices to carry back to their nest. Though the pigeon occasionally snatches items right out of the hands of a person on the street, often it comes in through windows or slips in through faults in the exterior of buildings.

With intelligence: The pigeon is more aware of the value of the things it steals and is less influenced by what is and is not shiny. At human level intelligence it can text to broker deals for stolen goods and information and has an apartment whose “wealthy owner” is always away on business with a minion to house sit and take care of “the master’s” odd pet.

Supernatural: Pigeons have long been symbols of protection and an omen of death. At supernatural levels, the pigeon is a modern day mob boss, fronted by a proxy. His minions enjoy his supernatural ageis, while his foes are haunted by his mark.

6 Responses to Three Intellegent Animals for Your City Game