A buddy of mine started down the road to GMing for the first time a few months ago. While the games he has been able to run have been very short and thrown together in the minimal spare time that our lives allow, they’ve been great fun and an even greater source of ideas. Watching him go through the trials and tribulations of a newbie GM, and watching his fresh perspective on gaming elements, unmarred by too much engrossment with one particular play style or rules set, is incredible and gives me lots of ideas for articles. The latest game we played impressed one idea on my mind in particular, the importance of the physical space shared between the players and the GM.

The Space Between Players Is Very Much The Space Where The Game Occurs, According To Our Brains
I’m going to get a ‘little’ sciencey with these next few paragraphs, but follow along. They’ll help you think about the process of the game in a much different way. When players and the Game Master sit around a table, or get 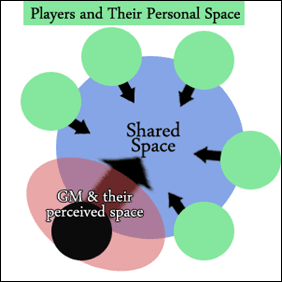 together to game, they almost always sit facing each other and create a bubble of space in between them all. And this shared space is incredibly important in many ways.

Visually Important
This is shared space of the game, where most players and GMs eyes turn. Whatever ends up here, whatever they see in this area can’t help but modify their thoughts and be added to the miasma of things turning around inside their heads. When we imagine things, especially images, we tend to project them forward into the imaginary space where our eyes would naturally see. Try it. Imagine a large golden dragon with an incredible wingspan flying through the air. Do you feelÂ  your mind positioning that image as if it were right before your eyes. Maybe on a movie screen or just floating. This is because our brains make use of the same processes and pieces of the brain to create images as they do to process images. This alone makes that shared space important. Anything placed here tends to exist in the same mental space as we imagine things, right before our eyes. That makes this area incredibly important. If it is cluttered with food and non-gaming stuff, the immersion gets broken. If everything here pertains to the game world, then the immersion factor is increased in the players’ minds.

Aurally Important
Even though we hear other’s words with our ears, we have a tendency to conceptualize it as coming in a straight line from our mouths. The space where all those words meet is between the players, and that increases its conceptual importance as the space where the “game” lives. Even though players will imagine it in their minds, they tend to envision it as being out “there” between them and the other players. When a person explains the actions of their character, it is somewhat like casting those words into the shared space to make them real. Until they are spoken and merged into that shared space, the actions don’t really happen. The characters don’t really do anything.

By now you’ve hopefully started thinking about the physical space of the game in a different way. Let’s talk about how to modify that to modify the game going on.

The GM’s Space And How To Use It
Executives have big desks because they take up more space. These desks are also made in such a way as to emphasize the person behind it, promoting their importance and power. A GMs space can do the same thing as well, to positive or ill effect. The GM screen is designed to put a barrier between the players and GM, expand the GMs personal space, and give him a secret area from which to work (something the players don’t have. There are many other things you can do with the GM’s space.

The Players’ Space And How To Use It
The player’s space is more about the actual player inhabiting it than what it projects into the shared space. Everything here will be reflective of the player themself and t heir character. Use this area to reinforce player concepts and to help the players stay in character.

The Shared Space And How To Use It
We’ve already talked about the shared space and how important it is, so lets get right into the nitty gritty with things you can do to manipulate it.

Some of these ideas will work better with visual and tactile based people, but they are inherent to the ways that all of our minds work. Manipulating this perception of the physical space manipulates the perception of the game world being built inside the players’ heads. These are all tricks of basic perceptive psychology, but they really work on a fundamental level when implemented. Try some at your next game and see how it changes the way the game goes. Enforce a no pop on the table rule, or put a riser under the map to keep it up off the table and see how it changes the game. The advice mentioned above is just what I could think of while writing this article. There are many more perceptive space tricks that can be used in this way. So what ones do you instinctively use at your table? What physical space tricks help you run a great game?