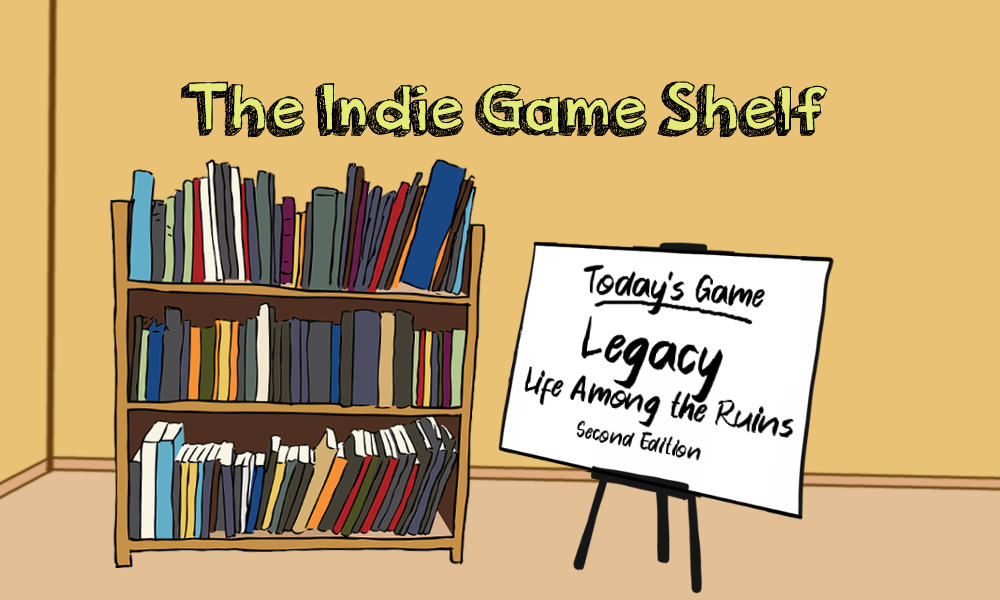 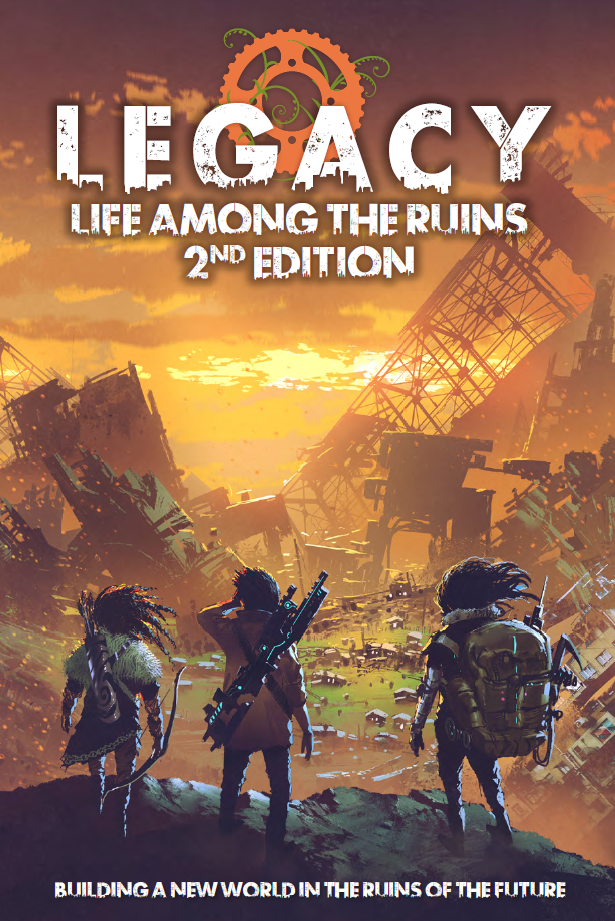 Legacy is a game squarely set in the post-apocalypse genre, but where the game differs from most others is in the scope of the narrative. The stories told in this game span generations, truly living up to the game’s premise of world-building. Players in this game do control characters as in other RPGs, but the main interface between players and the game world are the Family playbooks, which represent whole groups of people across the duration of the world’s development. The framing of the game’s fiction zooms in and out between the two perspectives, with some stories being personal to Characters and others taking a wider, more epic view of the activities and relationships of Families. In this context, a Family is not necessarily a group of people related biologically; they can be united by ideology, culture, circumstance, or anything that forges a bond of loyalty between people. Families grow and change, are driven by various purposes, have relationships with each other, face threats, and can pursue grand, world-changing events in the game called Wonders.

Like in many Powered by the Apocalypse games, the rules present a style of play more than a detailed setting. There is assumed to have previously occurred some great disaster that tore civilization down, and the game’s story is meant to take place in the aftermath, but the details of the world and its history are left to each game group to decide. However, Legacy provides rules for determining these details through playbook choice and configuration. The selection of a playbook can describe aspects of the game’s world, but the choices made within that playbook refine the setting’s history.

The game mechanics of Legacy drive toward changing the in-fiction world during play, from character death to the mechanics of Wonders, both of which create huge narrative and mechanical changes to the game which are felt for the rest of the campaign.
Share139
Tweet9
Reddit1
Email
For example, choosing the Family playbook “The Order of the Titan,” which describes a group dedicated to hunting, fighting, or scavenging gigantic alien beasts called Behemoths, means that you now know that Behemoths are a part of your game world. Once a playbook is chosen, however, then a stat line must be selected, and the choice of stat line might dictate “your studies woke the Behemoths and set them loose” or “the Behemoths brought the Fall to the world.” In this way, Family and Character setup also result in setting up the world, not only historically but also geographically with the building of a collaborative world map. (I love games that use collaborative map-building!)

In addition to a Family playbook, players also begin by selecting a Character playbook to represent an exceptional member of the Family who will serve as one of the protagonists of the story. These playbooks start with an archetype (the Elder, the Scavenger, the Firebrand, etc.) and are customized from there. A campaign of Legacy spans generations, so Characters come and go as the game progresses. While players control one Family to usher through the rebuilding of the world, they’ll get the chance to play many different Characters over the course of the campaign.

The focus of the stories of Legacy lie in the building of the world. This is only partially due to the pre-game or start-of-game “worldbuilding” as I use the term in discussing other games. The game mechanics of Legacy drive toward changing the in-fiction world during play, from character death to the mechanics of Wonders, both of which create huge narrative and mechanical changes to the game which are felt for the rest of the campaign.

As a Powered by the Apocalypse (PbtA) game, Legacy sports core mechanics familiar to anyone who plays Apocalypse World or any other games of that design family. Playbooks have stats which modify 2d6 rolls triggered by the fiction and resulting in different outcomes defined by rule packets called moves. Legacy also adds an advantage/disadvantage mechanic to die rolls (replacing the usual +1 or -1 forward or ongoing), but the biggest structural difference from other PbtA games is the concurrent use of multiple playbooks by each player.

Players in Legacy control two different playbooks at any given time: a Family and a Character. The Family is the focus of the “zoomed out” epic view of the world’s story, and a player will generally control and evolve a single Family over the course of a campaign. Characters, however, both advance and retire at a faster pace, starring in the “zoomed in” views of the fiction, telling their stories and then moving on to be replaced. Families have one set of basic moves for their fictions, and Characters draw from a separate set. 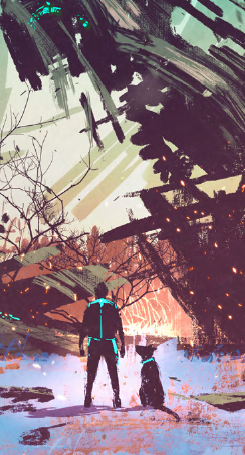 Family playbooks have stats and playbook moves. They also have Traditions, which is basically like the Looks section of other PbtA playbooks, the relationship mechanic is a currency called “Treaty” (as opposed to things like “Hx,” “Bonds,” or “Strings” in other games), Doctrine and Lifestyle provide mechanical tweaks based on a Family’s ideology or attitude and their population’s geographical arrangement, and Resources and Assets decide what a Family needs to survive, what they have to offer, and what special equipment they can offer their Characters. Each Family playbook also comes with an Alliance Move governing how they gain Treaty, and Inheritance, which confers benefits to that Family’s Characters and also contributes to quick character creation, a valuable tool for adding side characters to many stories.

Character playbooks similarly have stats and playbook moves. They have Looks and Backstory as well, but it bears mentioning that there is no Character relationship mechanic as there is for Families. Characters also have a Role which broadly describes their place in their Family’s society. A Character’s Role changes during the game and serves as both a character advancement marker (in place of XP) as well as a source of additional mechanics. The Harm track contains descriptors and mechanical effects unique to each Character playbook, and finally the Death Move describes how the Character leaving play affects the world after they’re gone.

The overall story of the campaign is divided into Ages. At the end of each Age, a time-passing move is triggered which describes affects to each Family, the world map gets updated, and Family playbooks are updated to suit the new fiction. During play, Families also have the option of devoting their surplus Resources toward Wonders, world-changing events on a massive scale. When a Family completes a Wonder, it is a special kind of advancing an Age, and it guarantees at the very least a change in the world map and mechanical effects felt by every Family in the game. A variable amount of fictional time passing between Ages means that the world can have changed very little or quite a lot before the next Age begins. The game allows tremendous opportunity for the complete exploration of the rise (and perhaps fall) of an entire world.

The second edition of Legacy: Life Among the Ruins is available for purchase in print and PDF. You can also check out Titanomachy (free PDF download or purchasable print-on-demand softcover), the quickstart for Legacy which contains core rules, pregenerated characters, and a setting starter so you can jump right into playing. If you’re looking for expansions, the Worlds of Legacy collection offers a variety of alternate settings and new playbooks and moves you can bring to the game, like the political sci-fi of a new planet colony in Worldfall or the evolution of sentient species at the dawn of time in Primal Pathways.

If you’re looking for similar games, there’s certainly no shortage of post-apocalyptic RPGs to be found, from classics like Gamma World (all 30+ years and seven editions of it) to more recent offerings like INDE’s dark fantasy-style Shattered or Hebanon Games’ intersection of zombies and economics, Red Markets. The big noise is, of course, Apocalypse World, and Legacy is solidly rooted in the Apocalypse World Engine, so if you’re looking for games with similar rules, you can have your pick of the Powered by the Apocalypse catalog. If you’re more interested in the zooming-in and zooming-out style of play, definitely check out the story game Microscope from Lame Mage Productions. If you’re particularly interested in the society-building aspect, Lame Mage also offers the game Kingdom, and you could also take a look at Ziapelta Games’ Wrath of the Autarch.

Rob is a freelance game writer, game editor, podcast editor, social media manager, and programmer. He can sometimes be found wandering RPG conventions in the northeastern U.S. or at home in New York City with his family of loving humans and disdainful cats. Learn more at RobAbrazado.com.