Welcome to the first installment of The Indie Game Shelf. Each article in this series will highlight a different small press roleplaying game, and the series as a whole aims to increase the visibility of the wide variety of games available today. Whether you’re a veteran gamer looking for something new or brand new to the hobby and wanting to explore what’s out there, we hope The Indie Game Shelf holds something fun and new for you to enjoy.

BLACKOUT: A Game about Women & the Blitz

BLACKOUT by Erika Chappell/Newstand Press is a game Powered by the Apocalypse and designed to take one GM and 2-5 players through a one-session scenario. Each session of the game represents one night during the Blitz, 8 months of World War II during which the German Luftwaffe made nightly devastating bombing runs over London. The characters in the game are women who have volunteered with various civil defense organizations and respond to the constant danger and harm that results from these air raids.

BLACKOUT is a game designed to tell a specific kind of story. It is undoubtedly a game about war, but rather than the glories of battle, characters are instead concerned with the tragedies of destruction. The characters’ party (called a “Section”) is made up of people from various walks of British life and a variety of larger organizations specialized in dealing with specific kinds of danger. The Section is one of many dedicated to the safety and care of a “Community,” a specific part of the city under attack. Character relationships are also important to playing this game, as much of the story is about teamwork and solidarity. Not only is it important to know how the main characters relate to one another, but also how they relate to the community.

As mentioned, a single session of BLACKOUT represents a single night of the Blitz. Over the course of this night, you can be sure that an air raid will occur, but you can never know when the attack will come, how severe it will be, or how long it will last. There are no rules for stopping the raid. You play the game until you’ve told the story of that night and, hopefully, have taken a look at the stories yet to come.

Rather than the glories of battle, characters are instead concerned with the tragedies of destruction.

The primary task of the characters is to provide assistance at bomb sites and other disasters, but they may not be able to finish at one site before another appears. Characters must choose not only who to help, but also how much to help before moving on. In addition, they also must care for each other and, just as importantly, themselves. Disaster relief is difficult work. If a person gives too much of themselves in an attempt to help everyone, they’ll quickly become less able to help anyone. At the same time, any moment taken for valuable rest is another moment during which a new bomb might fall. This is a game about help and survival in a time and place sinking under the horrors of war. 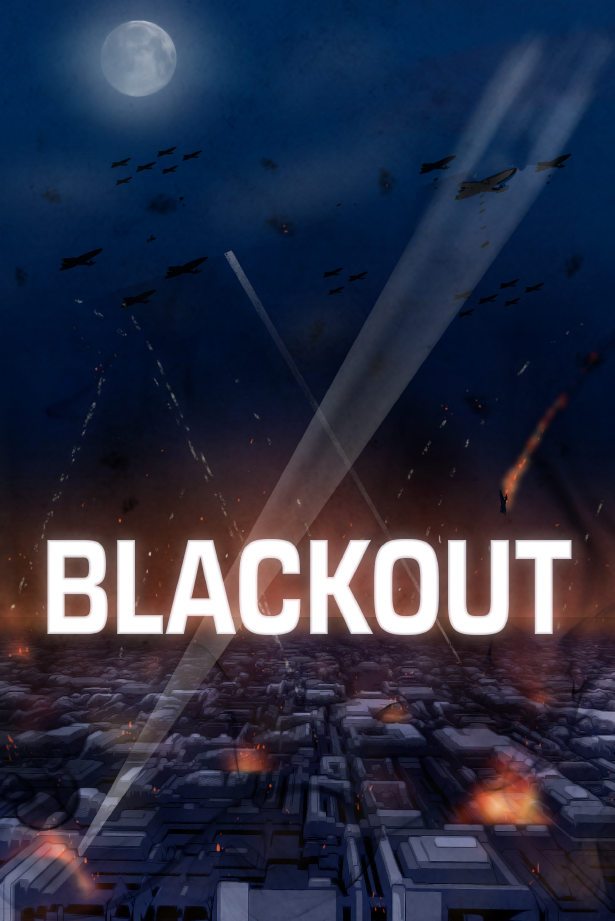 BLACKOUT is Powered by the Apocalypse (PbtA), meaning that the rules are inspired by Apocalypse World. Players of that game or any similar games will be familiar with the core mechanics of BLACKOUT, namely that gameplay is governed by discrete rules packets called “moves” which almost always call for a roll of the dice, modified by a character stat, that results in one of three result states (a miss, a partial success, or a full success) which then informs the fiction of the game.

Where the core of characters in many other PbtA games is contained in a character’s playbook, BLACKOUT uses a combination of two playbooks to create a character. One type of playbook, the Identity, describes your character’s nature as a person and provides a baseline of character stats. Examples include “The Working Lass” or “The Old Bird.” The other type of playbook, the Role, describes the organization for which the character has volunteered and provides professional skills and other abilities relevant to rescue work. Examples include “Rescue Services” or “Fire Guard.” By combining a playbook from each set, a complete character is created for use in the game, with many different combinations possible.

The driving force of the game is having disasters occur for the characters to respond to, and these disaster are governed by a central mechanic called “The Raid Clock.” The Raid Clock moves based on various triggers during the game, and a die roll against a target number set by the Raid Clock determines when disaster strikes. The Raid Clock also indicates how bad the disaster is, and therefore how much attention it requires from the characters.

Over the course of the game, characters can suffer not only physical harm, but simply the nature of relief work itself can incur Exhaustion. If left untreated, Exhaustion may lead to a Break, which is some additional burden the character must now shoulder. In contrast, characters may also accomplish Victories for successful work. At the end of the session, Breaks detract from Victories, but any Victories remaining provide narrative rewards which allow players to tell the stories of character’s survival of the night, the Blitz, or even the entire war.

BLACKOUT is currently available for purchase in both print and PDF formats from DriveThruRPG. For other games along similar thematic lines, one can firstly look to other work by the same designer, namely PATROL, a game about the Vietnam War. Additionally, further similar recommendations include Night Witches by Jason Morningstar/Bully Pulpit Games, a mission-based campaign game based on an all-woman regiment of Russian bomber pilots in World War II, and The Watch by Anna Kreider and Andrew Medeiros, a fantasy game of women and non-binary folks fighting a war against an invading supernatural force. If you’ve got something on your shelf you want to recommend as well, let us know in the comments section below. Let’s fill our shelves together!