The Elements of a Good One-Shot 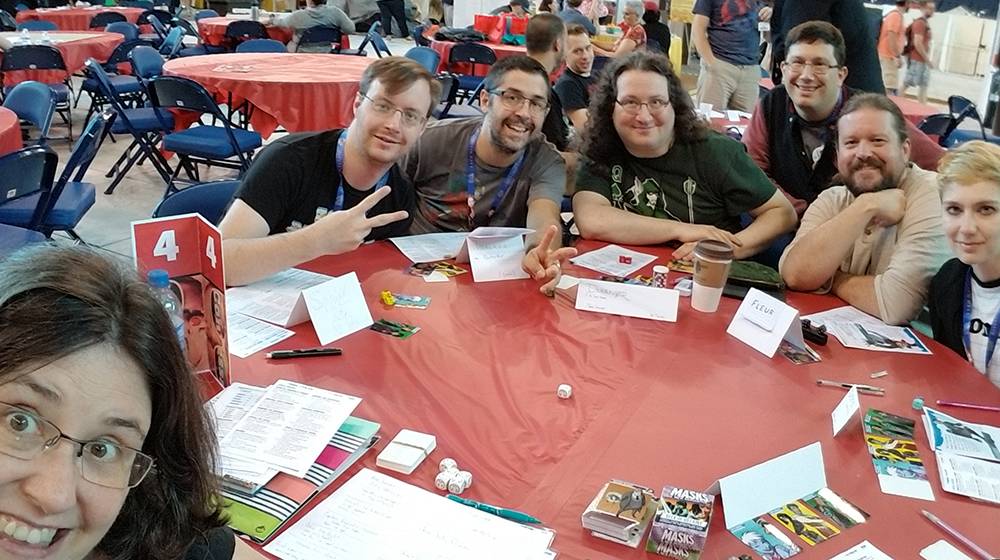 GenCon, Masks, where they ended the beat the bad guy Guardians of the Galaxy style… by holding hands…

I’m doing things a tad bit backwards here. This week’s GnomeCast was Matt, JT and myself rambling about the elements of a good one-shot game. It was a hastily thrown together episode due to how busy I’ve been, but Matt jumped in and did some research on the Stew’s archives and noted that, other than an article where I talked about one-shot characters, we haven’t had a focused one-shot article since Martin posted some way back in the day. So for today’s article, I’m reversing the streams and following the GnomeCast up with an article.

If you’ve read any of my articles, you might realize I attend quite a few conventions. I think this year my total will end up being ten. These vary in scale between barely surviving college cons, thriving college cons, medium sized and growing cons, to the monsters of the summer–Origins and Gen Con. Some of my favorites are what a co-worker calls my ‘bespoke artisanal cons’, basically private get-togethers of folks who still game like crazy for a weekend.

Anyway, as a result of my frequent con attendance, I end up running quite a few one-shots throughout the year. Some cons I only ran one game. At Gen Con, I ran four different games. I’m not a workhorse GM like some because I rather enjoy being a player, but I still want to do what I can to bring games to conventions. While I never think of myself as an expert, my experience with the subject at least gives me room to talk about the subject.

Now, just to clarify, not every one-shot needs to be run at a convention. Home groups rely on them too; in between campaigns, when the regular GM can’t make it, when the group is missing key people for the next session, or because they want to try out a new game. Even if a group is super dedicated to a particular campaign, there can still be opportunities for the occasional one-shot and the elements of what makes a good one remain the same.

Here are some of my thoughts on what makes a one-shot successful: 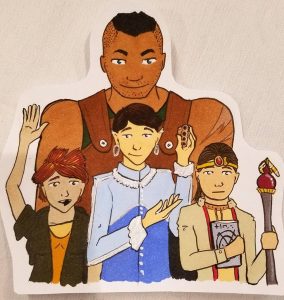 Because you need to start and finish during the same session, it’s key to know how to pace a game. Regardless of the type of prep a GM brings to the table, they need to give their players a good opening scene and a satisfying conclusion to the game. What happens in the middle should be plug-and-play as needed. Some groups will speed through a game and need everything the GM has prepped or ready to throw at them. Other groups will fixate on a particular aspect of the game and may not need any middle encounters before they get to the finale of the game.

Speaking of the finale, make sure you have one for your one-shot. If you don’t give your players some kind of conclusion at the end of the game, it’s not going to feel like a very satisfying game. You don’t need to wrap up every loose end, but any major plot points of events should be explained and wrapped up.

As a side note, I will argue that a well done cliffhanger can serve as a good conclusion, even for a one-shot. Take a look at how Empire Strikes Back ends. There’s a climactic fight at the end and there’s no question on how that shakes out. Just because you’re left with some burning questions at the end doesn’t mean the ending wasn’t satisfying. It may make the players ask you to run it again at some point, but you still gave them a solid game experience. In one Monster of the Week one-shot I ran, there was a big, emotional revelation at the end of the climactic fight. The logical conclusion was for one player to break her sacred weapon and walk off into the night. The players still talk about that ending. Use cliffhangers sparingly and make sure it’s suitable for the game as it’s wrapping up, but they can be quite effective.

Get the Players Invested Quickly

In one-shots, you don’t have time for your players to build a slow, organic connection to their characters or the game itself. You need them invested right away. If you’re going to make a habit of running one-shots, it’s good to develop a few different techniques for this. During the GnomeCast episode, Matt and I discussed how we have different things we value in games. I am far more into the story and the characters, while he’s more interested in the tactics and problems to solve that the game presents. The players you get at the table may also vary like this, so you may not be able to please everyone, but having a handful of techniques you can use to get them involved right away will help.

I’ve rambled on about how to create characters for one-shots, so you can read about that over here. For pre-gens, keep the backgrounds interesting and relevant to the game, but also succinct. I know I have a tendency to write a book, so I always have to go back and edit my backgrounds down. If you give your players a book, many players will tune out from the tl;dr (too long; didn’t read) and important bits of background can get missed. I also enjoy creating hooks between the pregens, so I’ll always weave connections into the characters to help establish some roleplaying hooks right away. 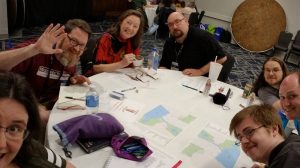 Origins, Bubblegumshoe, they followed the clues with their own style, but still solved the mystery.Â

Every character at the table should have something to do in the game ahead. Do not include characters that don’t have a place in the adventure you have planned or expect to run. You don’t have to specifically plan encounters for each individual character, but you should have in mind a way that each character can be useful. One convention failure I played in included two very social characters among the pregens, but the adventure the GM had planned sidelined both characters quite thoroughly by sending them off into the wilderness to an abandoned mine. Good players will make their characters integral to the game, but there’s only so much they can do when their character’s skill set is completely unnecessary to the game’s scenario.

With many indie games (including PbtA games that I love to run), the players should be creating their characters at the table. These games usually don’t encourage pre-planned scenarios, but the same rules apply. The GM should make sure all the characters created have a role to play in the game ahead. Pay special attention to the things that players are calling out in their characters because they’re essentially telling you what they want to see come into play.

Beyond the characters, have an interesting and engaging opening scene. Don’t dawdle getting them the hooks for the adventure. If the game is about finding a missing person, they should know in the first ten or fifteen minutes who that missing person is. Get to the action! Make sure that introductions happen so everyone knows who is playing who (table tents can really help here), but you don’t want to drag the opening out too long before they start getting involved in the game world.

In Medias Res can be a good tool to use, but handle it carefully. The players should have an understanding of why they’re in the scene as it starts. I’ve seen too many GMs try and use this type of opening without giving their players a working understanding of why they would be in that situation and why they would be working with the other PCs. Establish that information first, then dive right in.

By their very nature, one-shots have a set time limit. At cons, it’s often four hours, though they can range from two to six hours as well. Regardless, they all have a deadline they need to be finished by. Make no mistake, it is incredibly disrespectful to your players to assume they can stay longer for YOUR game. It’s one thing if it’s your regular crew playing in your dining room and you ask if they can stay later. At a convention, your players have people and places they need to go see. If I run into a GM at a convention that runs over their time slot, they get put into a ‘do not play with again’ list.

Keep some sort of time-keeping device nearby. I usually have my phone on the table where I can quickly glance at what the time is. This way I know when to let my players have a quick break, but also when I need to start moving towards a finale. As mentioned above, different groups will fixate on different things and move through the scenario at different speeds.

You absolutely do not want to railroad your players through the scenario, but feel free to nudge them along when they seem to be fixating on an unimportant aspect of the game. If you have to, move them along by external forces pushing them forward. Maybe the villain finds out their location and attacks them before they can finish planning their own attack. Either way, keep the game moving and get them to that finale.

So there are my thoughts on the important elements to a good one-shot. Did I miss anything? What do you feel are the most important things to keep in mind so your players have a good one-shot experience? I’d love to hear your thoughts.