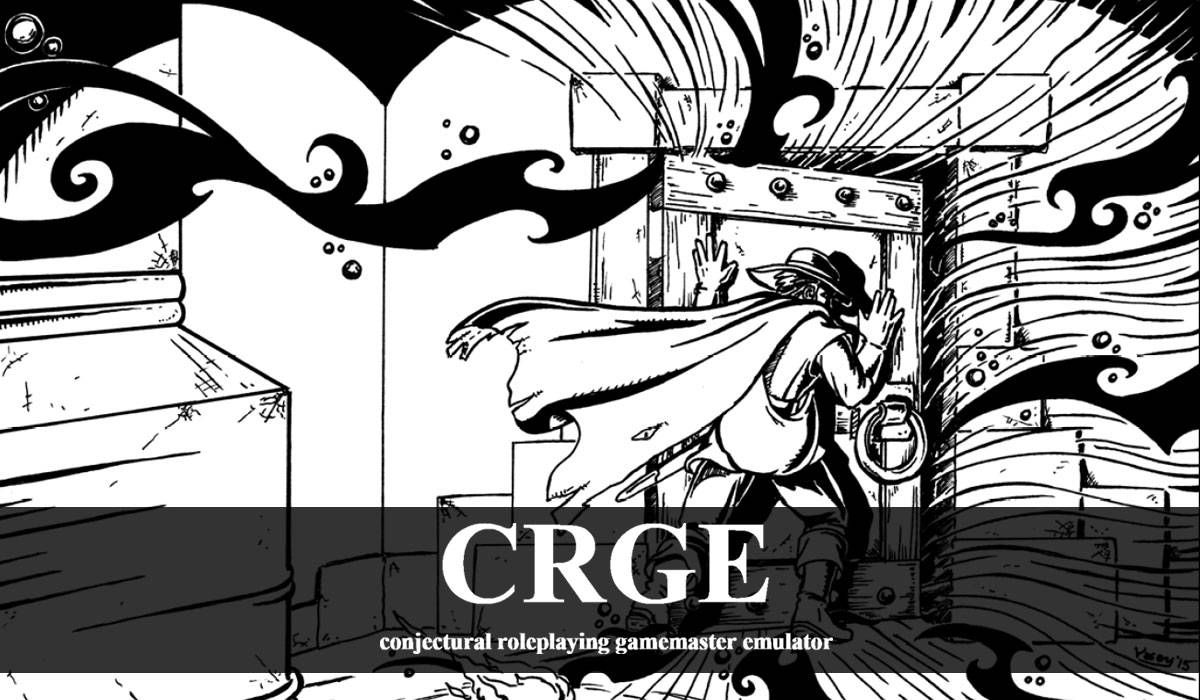 UPDATE 10/19/207:  Sadly, on Monday night (10/16/2017) the creator of CRGE, Zach Best, passed away from a long battle in cancer. A bundle was created in his name on DriveThruRPG as “Zach’s Book”, and while the bundle has ended, you can still use the page to donate money to his family.

Tell me if you’ve heard this one: It’s Thursday night and you want to play a game. But everyone in the party is across town, and it takes too long to set up, so they’d need to leave half an hour into actually playing. So you look over at your significant other, and they want to play too, but you can’t help but notice the dishes are piling up and the trash is full. Just then, your kid walks up and you have no idea what they got into, but it’s all over the walls now.

While my wife is going through grad school, we have almost no time to play. This is a huge change for me; for the last decade, I was running games twice a week for my FLGS. I was in withdrawal, to say the least. Even online play still requires scheduling with a whole party, and grad school, full time work, and a toddler make that hard. We also thought about running a solo game, but that meant one person on each side of the GM screen. So, we needed a tabletop RPG we could both play and share GMing responsibilities with, as well as be able to set up and walk away from quickly.

What we decided to do was take a rules light RPG that was something we were familiar with, Mircolite 20, and pair it with a system to help us run the game, a GM emulator. GM emulators are something special, and fall into their own, unique category of gaming, mixing tabletop RPGs, storytelling, and a whole lot of chaos.

GM emulators seek to help solo players answer questions their chosen ruleset can’t answer. A ruleset or system like Dungeons and Dragons does a fine job handling questions about conflict resolution. Is my character talented enough to open the locked chest? To bamboozle the mayor into giving me the keys to the city? To sumo-wrestle the tarrasque? The GM Emulator can help you answer questions about the state of the game world. Rule sets are not capable, except usually in a rudimentary fashion, of telling you if the town guard prepared for the orc raid, or if the planet your crew finds has sentient life. You could arbitrarily decide on an answer to that question, or you could ask the GM emulator to generate your answer. 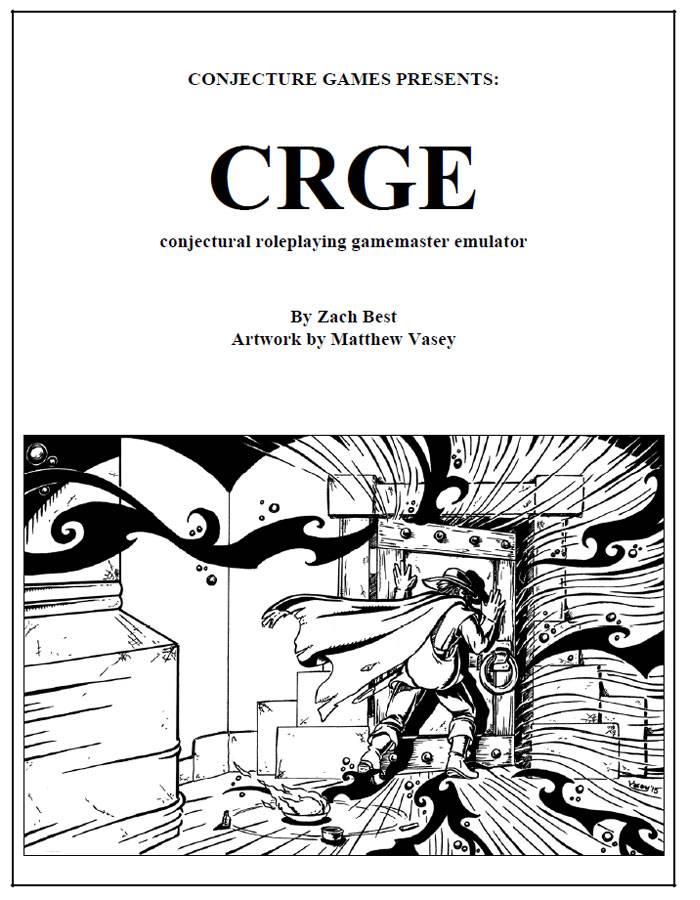 CRGE is one of many GM emulators available on the market. You can find it as a Pay What You Want item on DriveThruRPG. The core of the system works like this: you ask a yes/no question (“Does this city have any sweet magic item shops?”), roll a percentile die, and compare the results against a chart that will help explain what you find.

Most answers result in a binary yes or no. “Yep, the sweet magic shop is near by.” But the closer you go to 0 or 100, the results begin to change to “yes/no but”, then “yes/no and”, and finally “yes/no, and unexpectedly“. “But” results diminish the results. (“Yes, but it’s closed because an errant Robe of Many Things got loose.”). “And” results augment your answer. (“Yes, and there’s a buy one-get one sale on empty potion bottles!”).

Narration In Your Hands

Once you know your result from the chart, it’s up to you to interpret it. Whatever makes sense to you, and the story you want to tell, how your characters see the world, or whatever other factors you want to think up. And then go with it. The system provides just enough structure to move the story along. Not define it, but guide it. You get the pleasure of filling in the details.

All of that can still become too comfortable though, so “Unexpected” results throw you a curve ball. These spots sit on the extreme ends of the chart, and there is a separate list of unexpected things that may occur, such as characters (good or bad) showing up unexpectedly, or scene changes that force you to move the current event along quicker than you expect. These work well to keep the players on their toes, and can be a lot of fun to handle creatively. How do you explain the arrival of a new character in a locked room, or when the scene has to wrap up before you’ve accomplished what you wanted?

There are some other optional rules than can help the game along as well. Surge counters get added anytime you roll a simple “yes/no” answer, and each counter adds +2 to your next roll, resetting once you roll something other than a simple “yes/no”. It’s a simple addition that forces the game to keep things interesting, so you aren’t stuck taking vanilla answers for too long.

Another optional rule is story threads. Threads represent story elements that you are interested in focusing the story on. It’s important to have a running list of current threads, as some unexpected results ask you to change focus from one thread to another. These can be closed and opened as you feel that they reach resolution, depending on your character and what they consider the end of their stories to be. CRGE also provides three different probability charts to use, depending where you believe the story is heading, either to knowledge, to conflict, or to ending, with each chart progressively becoming more final (less “and” and “but” answers). Story threads are a great way to keep major plot points in mind as you try to weave your story. Roll something on the chart and what to put it in context? Grab a thread that makes sense and tie things together.

In practice, not every question about the game world needs to be answered with the emulator. A good rule is that you should only roll to answer questions that help move the narrative along. If you decide that something makes sense, or is very likely, a roll isn’t needed. No need to check what’s in every room you enter or village you plunder. Or, should you just come up with an interesting answer instead of rolling- go for it. The emulator is there just to provide a framework when you can’t fairly answer a question, but should be left by the side in the interest of good storytelling.

If all of this seems complex, the whole PDF for CRGE is 32 pages long, and mostly filled with examples and references. And keep in mind, it can be scaled to be as complex or simple as you feel appropriate for your game. My wife and I felt that, after the first couple of rolls, it was easy enough to manage the whole system during our game. The option rules do a lot to help guide the story, but players who feel natural at storytelling might find them restrictive. CRGE also recommends you keep track of threads, story developments, and your surge count by using index cards. This also makes cleanup a breeze. No need for journaling, just tuck your index cards away for the next game. This works especially well when our two year old decides to wake up from her nap in the middle of one of our gaming sessions.

When we feel that we can’t fill in a story element, or need help generating character or place names and details, we move over to donjon’s suite of online generators. If you haven’t played with the plethora of tools on his site, you should give them a try.

Choosing A System To Use With A GM Emulator

For our rule set, we chose Microlite20 as we are most familiar with d20 systems, so it’s easy to come up with content on the fly, or pull from the uncountable masses of existing stuff on our shelves. Also, with Microlite, we can easily keep the folder of rules for the system, plus the rules for CRGE, index cards, and our dice, in a convenient place on our book shelf, meaning we can pick up and start a new game quickly.

Since the GM Emulator can help you answer questions about the game world, we intentionally left our setting open to grow during our sessions. We did make a number of starting assumptions about what we wanted from the game: for instance, we wanted non-human races to feel very special, and decided that we would not create non-human characters for now. With just the simple assumptions, we asked some questions of the emulator as we played to begin filling the details, occasionally using donjon to generate names for places and people.

Our impression so far is that while CRGE works very well for us, there are some pros and cons in using a GM emulator. I enjoy tactical combat, but the CRGE doesn’t work well to handle the depth of tactical situations. You would have to ask the emulator too many questions to get reasonable responses to do things like move troops and choose targets. There are, though, a number of alternative systems written for that purpose (I like The Solo Wargaming Guide by William Silvester).

Another concern is deciding how to manage odd results like “yes/but” or “unexpected”. There have been times where it seems that the question doesn’t need more information than a binary answer. When the system begins to fault or leaves you unsure – just drop it, make a decision, and keep the game going.

One final note: this isn’t going to feel exactly like your normal experience with a full group. It’s definitely different, but that’s not a bad thing. If you hope to make a bigger narrative impact on the game, using a GM emulator liberates you from convention and gives you some new space to explore.

What other solutions have you used to be able to run small games without a GM? What other systems do you recommend in its place?