Super Heroes: the Most Narrative Genre? 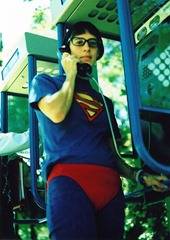 The supers genre seems fairly straightforward. Discussions of themes and ages aside, most supers games and campaigns follow a fairly standardized set of plot structures. Oddly though, in the unassuming supers game lies some potent forms of player narrative control. Chief among these is the PC origin story.

In the supers origin story, the player generally gets to dictate the way in which the PC gained or discovered their exceptional abilities. More so than any other standard genre, supers origins allow players to completely ignore or shape world cannon. If a player declares that they are a jungle prince from some time lost Pacific isle, it can be assumed there is at least one such place in the world. If the PC is an alien from another planet, obviously such aliens exist. Similarly, a PC that is a sorcerer or is from a benighted demon realm, says volumes about the nature of magic and the cosmology of your campaign.

While it’s completely within the GMs right to nix any potential problem causing origin story: “Sorry, no aliens/magic/demons/whatever in my world buddy!”, in my experience this is rarely done. In cases where the GM finds origin stories difficult to integrate or distasteful they are simply ignored and play continues as normal. Much like the comics never really explore the ramifications of Gamma Radiation (which is used in diagnostic medicine) causing the hulk, you can have a long lasting fun supers game ignoring the interstellar war that spawned one of your player’s PCs.

However, in my mind, this is a mistake. Sure, taking your players’ origin stories and running with them may give your campaign an odd and busy cosmology, but it also gives your game lots of exciting hooks for stories, plot arcs, NPC heroes and villains, and interesting locations and phenomena.

Origin stories and the ramifications thereof are less common in other genres specifically because of this “melting pot cosmology” they imply. In general other campaigns are more closely tied to a concrete setting that doesn’t have the the same kind of flexibility and freedom of suspension of disbelief that supers enjoys, but that doesn’t mean that they can’t exist in other genres on a much smaller scale, or even the same scale if you’re feeling particularly brave.

5 Responses to Super Heroes: the Most Narrative Genre?