O.K. we’re done with the recap. I doubt anyone reading this needed it but just in case, right?

Of interest today is specific vs amorphous adjectives. I doubt those are actual grammar terms, I’ve just made them up to serve my purpose. Grammar nerds, feel free to school me on the correct terminology. Since I made them up, I’ll define them so that we’re all on the same page.

Specific Adjective: an adjective that refers to a single specific difficult to confuse trait, especially one version of a trait. Ex: red, but even better vermillion or crimson. The important distinction here is that when you use a specific adjective it doesn’t say much but everyone knows exactly what you mean.

Amorphous Adjective: an adjective that encompasses a poorly defined set of specific adjectives, thus referring to a whole host of traits. Ex: bestial. The important distinction here is that amorphous adjectives say a lot, but aren’t very precise.

RPGs in general have had a history of making much more use of specific adjectives over amorphous ones, especially in descriptions, tables, and double especially since the 90’s era trend of making “Diablo-style” piecemeal enchantments for magic items, which I’ve touched on very briefly elsewhere. But there are benefits and drawbacks to both types so which you use and when is worth a bit of consideration. 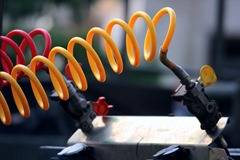 Detail Level: Specific adjectives hit one detail very clearly. They’re the sniper-rifle of adjectives. If the wires must absolutely be red, blue green, white, green blue and the buttons must be yellow, burnt sienna and white for your PCs to defuse the bomb, you’ll need to use those specific adjectives in that order. On the other hand amorphous adjectives hit a bunch of details at once with less control. They’re the shotgun of adjectives. If the wire and button colors are less important, you say “a pallet of colors” or even just “colorful” and you’re done.

Length: Because specific adjectives hit only a single detail, in order to describe a complex setup you can end up using quite a few. We might describe a sword as “black iron blade pitted, scarred and licked with crimson flames, the hilt made of yellowed human bones carved with runes, giving off a dull aura of agony and hatred”. We have a very clear picture of that sword at the expense of two lines of text. Conversely, you can handle the whole thing with a single amorphous adjective: “Hellish”.

Vision: This is where I think some of the trend towards specific adjectives comes from. Specific adjectives convey a very clear vision. Look at the sword description used above: “black iron… and hatred”. We could give that description to a hundred artists and while we’d get variation, they’d all look at least similar. Using a litany of specific adjectives makes sure the picture your players see in their head is pretty similar to yours. But with amorphous adjectives there’s no such guarantee. What does a “Hellish” sword look like? Is it made of fire? Does it have tentacles and eyes? Do a Google image search and you’ll find dozens of alternatives (and probably some porn. Turn on safe search first). This means every player at the table will be picturing something different.

So the takeaway here is that each type of adjective type has it’s advantages and disadvantages and it might be useful to consider the mix you’re using. Do you need your players to see exactly what you see in your head, or is this another place where the prep-lite mindset could save you a few paragraphs? Are your players following you well enough or would a few more specifics be useful? Adjusting your mix is a relatively minor process and can be a fun process regardless of any potential benefits so don’t hesitate to experiment.

2 Responses to Specific vs Amorphous Adjectives