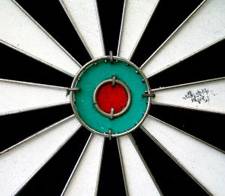 From what I’ve seen, there are two schools of thought when it comes to disclosing target numbers (called a variety of things in different systems):

I’ve been used to option one as the default approach for years, on both sides of the screen. Over the past few years, though, I’ve had a chance to see option two — full disclosure — in action as a player, and it rocks.

I’m now solidly in the second camp, and will be taking the full disclosure approach the next time I run a game. Telling your players what they need to roll has several benefits:

You don’t have to share every target number, either — just most of them. You can still make a few rolls in secret, or keep mum about what the party needs to roll when you think it’ll add drama to the situation.

If you’re used to not disclosing target numbers, this represents a major shift in play style — and one that might not be for you. The best way to find out if this play style works for you and your group is just to try it. At your next session, disclose all (or nearly all) target numbers in advance, and see what happens. Like me, you might discover that you love this approach.