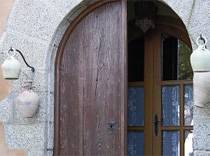 If you imagine the hooks and plot elements in the PCs’ backgrounds as open doors, it’s a good idea to close those doors during play. Not all of them, of course, and not according to some secret formula — but closure is important, and if nothing in a character’s background ever gets resolved during the campaign, why was it there in the first place?

The problem with closing doors, though, is that if you close enough of them then your players will have fewer points of entry into adventures, and fewer obvious avenues for character development.

The trick is to open new doors as you close the old ones. This will happen organically just by playing the game (for example: you introduce a new nemesis for the party, who becomes a hook for several adventures), but it’s helpful to keep the creation of new doors in mind when you’re writing scenarios.

These new elements can be tied to closed doors (or grow out of them), or they can be completely new, with no connections to past background elements. The key is to keep providing fuel for your players to work with.