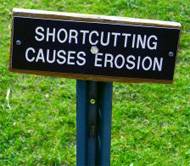 Jolly Blackburn’s excellent “Knights of the Dinner Table” comic strip has tackled this topic, but it’s never come up on TT: What do you do when a player’s character dies and instead of creating a new PC, your player erases the “B” in Bob, fills in a “C” and reuses the exact same character?

I honestly don’t think this comes up too often these days, but I could easily be wrong. And if I am, I’d recommend handling it one of three ways:

1. If you’re running a beer and pretzels campaign where nothing is taken too seriously, let ‘er rip.

2. If Bob died before his player had a chance to enjoy Bob as a character, Cob should definitely be A-OK. You might encourage your player to put a bit more creativity into it, but it shouldn’t be a big issue.

3. If neither of those two cases fits your situation, disallow it — unless your player can provide a compelling reason why Cob makes the grade.

The longer I write TT, the less often I take that kind of adversarial stance on player-related issues — but this one is just so sloppy that I feel pretty strongly about it. What do you think about Cob, and does he have a place in your games?

(I’m heading to GenCon tomorrow, so between spending time with my wife and packing, I probably won’t be on much today. I’ve got posts cued up through Monday, and I’ll see you next week! — Martin)