Game ideas come from the strangest places. I’m currently working out details for a new campaign–and I think I’ve stumbled on a few interesting elements that apply more generally. One big element that I’m considering is how much I want to work out before the players come to the table–do I create a detailed world with 80 pages of history, detailed maps, and several detailed alphabets? Do I show up with just a game system selected and collaborate to build a world to adventure in? I just did that. While it worked well, I’d like to follow my vision a little more closely instead of building it through consensus.

The game I’d like to run is a weird smashup of several elements. Here are the seeds–the ideas that got me started and spurred my interest in creating a campaign. 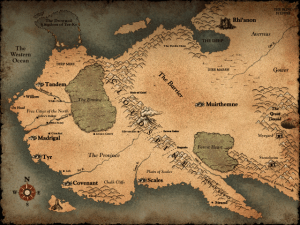 As much as I like Midnight, the setting reflected the assumptions of D&D 3–and the visions that come to mind when I think about the game flow from Myth. As cool as the video game was, it is very tactical–something that’s very enjoyable in the game, but I don’t know how well it will translate. And though I like the Myth plotline, I want to allow a lot more direction and input from the PCs. Together, those requirements argue for a hybrid or homebrew world.

A World of Our Own

Homebrew worlds have their own set of challenges–like the time it takes to create them, and the difficulty in translating the vision to the players. Unlike the glossy books and extensive histories that the major publishers create for their worlds, my notes are likely to remain cryptic and plain. I’m not an artist! Plus, you have the problem all GMs encounter–how do you persuade players to read through your material anyway?

Besides, I’d like to share some of the world building with my players. I do want to create history and places without feeling like I’m borrowing it from their creator, and I do want to build complex relationships between the villains, but I don’t want to be responsible for deciding how many tines forks have in the various kingdoms.

There are a lot of elements that players look for in a campaign–some that are harder to supply in a homebrew. When I create a character, I usually like for it to fit into the world; if I don’t know that elves in this world are vegetarians, then I won’t understand their horrified expressions when my elf carves off a deer haunch for dinner. A sense of authenticity can be hard to communicate–particularly if the GM never thought about whether elves were vegetarians until that moment. (This issue is one reason that many groups have trouble deciding to play more historical games, particularly set in unfamiliar cultures–without research, their characters violate taboos and expectations, unless the GM or table expert halts the game to explain why it’s a bad idea. Few people want to get expert approval or mini-lectures for each of their actions.)

“Blank page” syndrome can make it difficult to begin picturing a character–when you have nothing to work from, it can be hard to find the first thread. While D&D 4e has a built in discussion point for party creation (who is covering each role?), it’s independent of the world and background–both elements that excite me as the GM. (Dogs in the Vineyard provides excellent guidance for beginning character development with the “I’m a Good Shot” example in the character creation chapter.)

To provide examples of character elements that make sense in the world, I decided to create kernels–background bits that can be selected alone or in combination. I hope that these kernels will explode into a character in a player’s mind. Here are some examples:

That’s my plan for creating a derivative but hopefully awesome setting. My hope is that the seeds, probably refined into a bullet pointed history/enemy list and sketchy map, will anchor the players enough to get them engaged with the world. I hope that the menu of kernels above, plus more for other races and classes, will make creating characters with hooks and ties to the world easy. If a player creates their own hook instead of picking one of my kernels, they should be able to create something that fits easily–since they’ve read through and rejected the other ideas.

That’s my hope anyway. Have you ever tried something like this? How did it go? Please let me know what pitfalls you see in this approach.

5 Responses to Seeds and Kernels