Review: Stealing Cthulhu, One of the Best Gaming Books I’ve Ever Read

I recently read Stealing Cthulhu (hardback, PDF), and it was so good that I had to share it here. 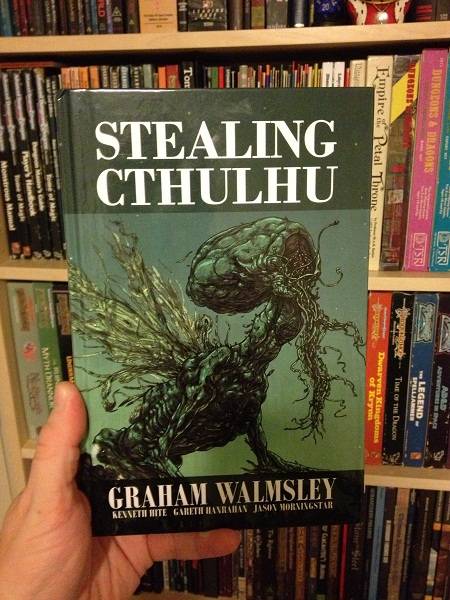 Stealing Cthulhu is Graham Walmsley’s guide to creating Lovecraftian horror scenarios by stealing plots, stories, and creatures from Lovecraft’s tales. More than that, it’s a guide to chopping up media you like and turning it into adventures — all sorts of media (not just Lovecraft stories), and all sorts of adventures (not just Call of Cthulhu scenarios).

The whole review in a nutshell

Stealing Cthulhu is one of the best gaming books I’ve ever read.

It convinced me that I could create compelling horror-mystery scenarios, something I didn’t think I could do; it inspired me to read a bunch of Lovecraft’s contemporaries whose work I’d previously thought sounded boring; and it’s given me a toolkit for creating adventures for a wide range of games, from Star Trek to Dr. Who to D&D.

All GMs should steal; Stealing Cthulhu will teach you powerful, versatile ways to do just that.

Why is it so awesome?

The basic premise is that you can follow one or more of four basic patterns of theft and have a scenario in no time:

The first is: steal an idea from Lovecraft, change it and reuse it. The second: steal an idea, emphasize something that Lovecraft didn’t emphasize and reuse the idea. The third is: steal various ideas and combine parts of each. And the fourth: take a Lovecraftian theme and riff on it.

From there, Walmsley — and his annotators Kenneth Hite, Gareth Hanrahan, and Jason Morningstar, who provide lovely handwritten notes in the margins throughout the book — go step-by-step and apply those four patterns to everything from scenes to locations, and then put them into practice by showing you how to use the techniques in the book to design scenarios.

For example (these are all from the book):

And that’s just scratching the surface. The book goes into depth about every approach, with copious examples, and then addresses each major Lovecraftian creature in its own chapter. It’s a treasure trove.

Walmsley and co. get horror, they get Cthulhu, and they get scenario design. This book is like a master class in adventure creation.

And, as I said up top, it applies to other genres and games, as well. Sure, you won’t find advice on dissecting Dr. Who episodes to create Dr. Who adventures, but after reading it that was one of the first uses I thought about putting these techniques to — because I think it would work just as well.

If you run Call/Trail of Cthulhu, picking this up is a no-brainer.

If you run horror games with an investigative bent, ditto.

And I’d argue that if you run any game with one or more strong media inspirations, be it a licensed property RPG like Star Trek or a D&D campaign that draws heavily on Conan and Fafhrd and the Gray Mouser, this is a book you should own.

Is there anything wrong with it? No, it’s just a brilliant book. Update: As Graham points out in the comments, what I thought were typos are actually a hidden message I wasn’t sharp enough to spot. Yes: There are a surprising number of typos in the book. They don’t detract from its usefulness, but they’re as annoying as typos usually are. Apart from that, it’s brilliant.

Coda: “catacomb.” (Read the book to find out what that’s about.)

6 Responses to Review: Stealing Cthulhu, One of the Best Gaming Books I’ve Ever Read