Realism? Who needs it? You do! 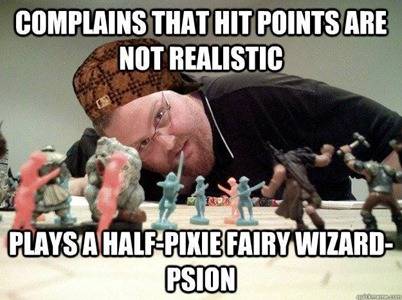 Ross Isaacs from SoulJAR Games and I recently had a yelling match over the meme pictured on the left, which I am given to believe originally came from Drinking Quest. By yelling match, I really mean civil discussion, but those aren’t nearly as exciting. While I’m revealing my blatant falsehoods, I might as well admit to one more. That article title is misleading too. You see, I don’t believe in realism in RPGs. I’m pretty sure that no one believes in realism in RPGs. Yes, I know that there are games from a hoary, ill considered era of RPGs and wargames which involved doing vector calculus to find the trajectory of your starship as it moved through space and I know there are systems that require multiple table lookups and math equations to simulate simple actions in an attempt to be as realistic as possible, and that even today there is a resurgence in these types of games now that the computing power of mobile devices can be harnessed to assist in the work, but frankly that sounds less enjoyable to me (and in my experience to most gamers) than a prostate exam.

But, I think realism is a common enough misnomer that we’re forever stuck with dealing with debates over how realistic a system is ad nauseam, even if no one in the discussion means realism and is instead using it as a clumsy synonym for what they’re talking about. Another common buzzword that’s a step in the right direction is verisimilitude, which roughly means “having the ring of truth”. This is better but can still fall into the trap of assuming the standard for “truth” is the real world. Instead I like to say that games need to start with a framework of givens and then logically progress from these so that they make sense. For example you might say your game is “generally like reality” but “it has 3 types of magic, none very powerful” for which you might give a few sentence overview based on theme, power level etc. This approach has the advantage of being able to completely divorce itself from the real world but still provide a setup for sensible extrapolation.

Now, I am given to believe that there exists a faction of gamers out there who thinks that worrying about this sort of thing is silly. “We are playing a game with dragons”, they will say. “Given a world with such fantastic beasts, how can we question anything else?” My answer to these gamers is that just because a world is not like our own, and even if it contains strange things like magic and dragons, that in no way means it does not follow it’s own internal rules for reality and that things in that world are not predictable and repeatable. We need not concern ourselves with the nuts and bolts behind magic or dragon physiology or fairy culture but these things surely exist in those worlds, regardless of whether anyone is aware of them or not. Applying this standard doesn’t take much work. All you have to do is occasionally answer the basic “why” or “how” if it’s not obvious. In most cases these questions are easy to answer based on the setup of your game and many of them will pull double duty. Once you’ve stated that owlbears and goblins are natural creatures no different than wolves or people and they evolved in the same way, that answers the same question for many other beings. Many of these questions are answered for you by your game system as well. Somewhere in the monster manual it probably tells you where little golems come from. Long story short, you’re just keeping your “WTF radar” up and pinging for things that don’t make sense and either changing or explaining them. Having a world that makes sense isn’t simply a decision of style. It brings all sorts of benefits to your table.

Benefit the first:
It makes the decision making process easier for the players and planning sessions easier for you. If your setting makes sense and follows a general set of rules, then both you and your players can be expected to know what is reasonable and what isn’t in terms of actions and consequences. The more you ignore the need for the setting to make sense, the more difficult this becomes.

Benefit the second:
The more your world has internal cohesion, the easier it is to accept. This eases immersion and reduces the need for “Wait? How does THAT work?” moments. While there is always an answer to those questions the more of them you have to answer both in frequency and magnitude, the harder it becomes to suspend disbelief.

Benefit the third:
Lacking internal sense has the ability to corrupt your vision of your world. The more often you leave WTF? moments hanging unanswered or answer them with essentially “It’s just magic O.K.? Don’t worry about it.” the greater the perceived level of magic and/or chaos in your setting. Knights of the Dinner Table once mentioned a RPG dungeon crawl setting in which nothing made sense and gave an example of a common dungeon encounter: the dreaded duck with the hot dog cart. If you didn’t purchase a hot dog from the duck and consume it (which had random potentially deadly consequences) the duck would beat you to death with the cart. I don’t remember if this was mentioned as a joke or as a true story from someone’s table (someone out there source me if you have it). The more unexplained WTFs you’ve got, the closer to this campaign you edge. That may not be an issue if you’re aiming for magic heavy or nonsensical, but if you’re not, it’s best to avoid the issue.

Benefit the fourth:
Generally these things, if you know when to stop, are interesting fluff without being too much work. A sentence or two on why a strange monster is in your dungeon, or why the monsters in your dungeon don’t starve, for example, can help you dress the setting or provide interesting material to pass on during the game. Don’t think though that you need to, or can get away with droning on for an hour about say, the tax codes on Coruscant, but placing a ruined wizard’s lab to explain your weird critter and pale fleshy fungus to shore up your ecosystem can help make your settings more interesting.

Benefit the fifth:
It adds a level of polish to your game. We’ve all had an occasional laugh at other forms of media that rely on deus ex machina to do all their heavy lifting, that have plot oversights, or that make little sense. Heck, Mystery Science Theater made a show of it. While no one is going to publicly mock you for an adventure with a few plot holes in it (hopefully not anyway), avoiding those pitfalls makes your adventures seem more well thought out, better written, clean and professional.

So that’s my argument for, if not “realism”, explaining away or removing major WTF points from your campaign. Just remember, no one’s asking you to say, calculate population densities, or use real-world queue distributions for your random encounters. Anyone would tell you that’s purest madness. But brief simple tweaks are easy, fast, and have a host of benefits.

13 Responses to Realism? Who needs it? You do!