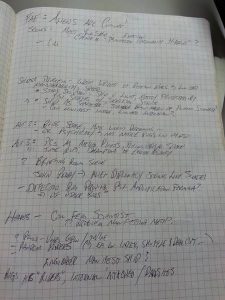 One of the things that interests me is seeing how other GMs create their notes and where their inspiration comes from. It turns out that I’ll be running a couple of games at our roleplaying mini-con on Free RPG Day, so… I generated some notes.

(I’ve actually done this before; back in 2010 I wrote an article creatively titled Adventure Notes, where I shared some notes from my first 4e game and a Spirit of the Century. You’ll see some commonalities and differences in the following notes.)

The notes I’m sharing are from much earlier in the process and cover the first few days of getting the raw ideas down. In fact, let’s begin at the beginning…

Wherein our Hero Realizes He Has To List His Game

At the last minicons, I committed myself to helping run the event, and prepared a backup game, to deploy if the event successfully drew in new roleplayers. (It was also for old hands who hadn’t signed up early for one reason or another.) I haven’t run those games; there hasn’t been a last minute rush demanding them. When players showed up seeking games, I sent them to join prepared games that still had space.

This year, I wanted to run a game and decided that it would happen only if I made them available for sign up, like everyone else’s games. I had a number of good game choices and narrowed it down to five or so. Since I was only running two slots… I had to make a final decision. I remained undecided until the night I created the game listing post.

My short list was Fate Core, Dresden Files, Fiasco, Fate Accelerated, A Penny for My Thoughts, and Psi*Run. I thought about a 4e scenario too.

I decided that prepping two full con games in only a few weeks would be too intense, so that clinched Psi*Run for the long slot. (Well, that and a couple of successful runs earlier this year.) Fiasco was tempting, but I’ve enjoyed reading the Fate Core and Fate Accelerated PDFs, and wanted to run one of those. The idea of Accelerated meshed with my thought about providing a game for new players… and so my decision was made.

Except that Fate Accelerated is a toolkit game, with no setting implied. Selecting Fate Accelerated hadn’t really moved me toward a game blurb, unlike, say Fiasco or Diaspora would have. When I mentioned my dilemma to Jennifer, she handed me Eureka. I decided to run a science fiction game and flipped to the matching section. I read several plots, but settled on #218, Troy’s Dot-Dash-Dot.

With that decided, I whipped up my game description, and hit post.

Set in the very near future, astronomical listening posts around the world start receiving radio signals from the direction of Saturn. The message doesn’t appear to be a language, but is clearly the product of intelligent life. It will take a year to reach Saturn with even the fastest unmanned probes. Until the PCs are recruited by an agency that doesn’t exist…

This short scenario features simple rules and is intended for people new to roleplaying.

Now Committed, Our Hero Worries That His Plot Doesn’t Match His System

Now that I’d hit “post,” doubt set in. The Fate Accelerated examples seemed perfect for bold, broad brush heroics… while I was imagining something more investigative and less flashy from the description. Would it work? Should it? Or should I play fast and loose with the “agency that doesn’t exist” and drift the game to something with more action?

I took my notebook and a pen to lunch the next day. I planned on writing down projected scenes, then breaking those one-line scene descriptions out and expanding them into an adventure framework. As I started writing I realized that I didn’t have a firm progression, because there was a lot of the core concept still indeterminate in my mind.

You’ll notice that I didn’t get very far before I skipped down the page. I decided to follow the questions that kept haunting the edges of my proto-scenario.

When I read Never Unprepared, I realized how quickly I engage my practical filtering–squashing the very useful brainstorming stage in its tracks. When I noticed that I was trying to write down the scenario framework out without engaging some of the competing ideas, I knew I was making that mistake. So I skipped down the page and explicitly brainstormed.

Alt 2: Bliss stage; most world is dreaming. Or [the aliens] psychically can make themselves unnoticed in our midst…
Alt 3: PCs are mecha pilots, flying through space.
Alt 4: A time rift, with the PCs Champions of Earth from throughout history, summoned to help stop the invasion?

When I skipped down, I figured that I’d come back and fill in the blank so near the top… but instead I kept writing in order, getting ideas on paper, quickly. The ships: problem is a short hand reference to “real world physics” considerations, as noted in Diaspora and other hard science fiction. From there, my brainstorming led me in much less physics constrained directions.

The first line is to see whether I want to start the game off with a good briefing scene. The idea was in my head because I got to play in a good Top Secret/SI game recently, and it seemed like something that might borrow well.

The second line relates to the book I had just finished, John Scalzi’s Human Division, the most recent Old Man’s War universe book. I’d enjoyed it quite a bit, and wondered if it was influencing me—and if it should.

Defector bug providing psi-amplification formula? Made out of other bugs?

Heroes: Cool female scientist. She has trouble manifesting her mech?

So, this is quite a transition, right? Between those two sentences, I’d decided that I should explore both of the main idea paths. One of the major factors that would influence my selection of setting was the heroes that emerged. If FAE’s strength is playing boldly written heroes, and only one path made heroes that sounded fun, then that fact alone would decide my setting.

At this point, I was leaning toward a vaguely anime-styled group of heroes who as a result of psychic experimentation could manifest mecha-shells of psychic energy. Yeah, that was quite a journey from what I was thinking during the original write-up. It all transpired during lunch (a chili dog at Peninsula Creamery).

? Power: vines creep and twine.
Random powers. Write each on an index card, shuffle them and deal them out during the session.
The engineer manifests the ship.
Bugs as “riders”, or internally attached, parasites.
Maybe the ship is common to all players; it manifests/is created when the players are all injected together. Perhaps it takes a minimum threshold to create the ship, so previous experiments, one-by-one never resulted in a ship. And the mutagen is so rare that this is the only one that can be made…

So, we’re still brainstorming; some big changes are popping into my head (and getting written down). The first line is a power, which sparked the thought that “powers” could be independent of characters, written on index cards. That would be an interesting way to show in play that the experimental drug was unpredictable—and encourage people to pick their character based on personality independent of powers.

“The engineer manifests the ship” was a return to the psi-ship idea, but now re-centered on the idea of a PC creating the ship, alone or as a group effort. Maybe each PC would contribute elements of the ship—so the athlete could contribute the ship’s reflexes and speed. Between the two ship ideas is sandwiched a bug/alien invasion idea. Hmm… a very different direction, Following that could lead to an earth based, paranoid, Invasion of the Body Snatchers style game. Which is where the next line comes from:

Brainstorming had created two good scenarios, both inspired by Troy’s plot, but with a very different feel to each game. They weren’t very compatible, since the action would be very different in scale and setting depending on the direction chosen.

In the few minutes left of lunch, I jotted down the following:

I’d come around, almost full circle to where I’d begun, with an attempt to sketch out a possible series of scenes. This was for the version of the scenario without mechs and grand psi-powers… was there enough to be an interesting game session? Only more development, and eventual play will answer for sure.

A Gentleman Bares His Brain: Is Your Interest Prurient?

Do your brain storming sessions go anything like this? Do one idea swiftly establish dominance, or do you also follow multiple paths for a while before selecting one to “really develop”?

Does this look into the writing of game notes interest you? I thought it might be interesting to see a game emerge from the “rough sketch” stage, since we so often just see the end result—a module that’s written for others to use, after editing and art. Neither exists in the attached notebook scans.

A scan of the three handwritten pages in PDF Let me repeat the warning: the PDF is handwritten chicken scratch. Your sanity is at risk!