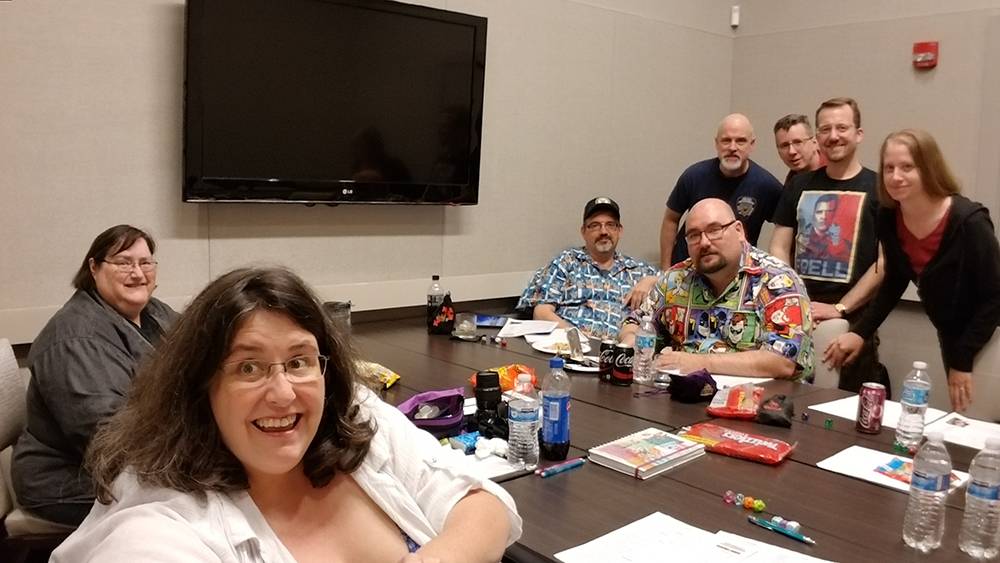 Origins was last week and I’m still walking around in a gamer high haze. There were games galore and many, many people to see and talk to—so many people! As I made my way through the convention center to a variety of games, both scheduled and off-book, I realized I know a crap-ton of people. How the heck did that happen?!?

Don’t get me wrong, I like people, but I’ve never considered myself particularly socially adept. While I’ve been told I’m wrong, I’ve always felt a bit shy. Despite that, this year I found myself regularly stopped to say hi in the hallways or between games. The entire convention was a journey of decisions on where to go and who to hang out with. The very fact that there were choices blows my mind. My very first Origins in 2007 was mostly me wandering around by myself, playing games and wondering where the only person I knew there had gotten off to.

Some of this can be explained by the fact that I’ve been coming to Origins for ten years, so it’s inevitable that I’ve collected a number of friends and acquaintances along the way. Some of it can be explained by the fact that I’ve become a wee bit embedded in the gaming community by writing for the Stew, helping out with the GnomeCast, and honestly just getting involved in the larger gaming world. I also make a concerted effort, in my own sort of awkward, self-conscious way, to try and stay in contact with the people I like. Living in the future has definitely been nice for this. The internet and all its social media options makes this so much easier.

I learned a long time ago that if I want someone in my life, I need to take responsibility for staying in contact. All relationships take effort by both parties and friendships are not absolved. They sometimes can be easier to maintain because of common interests and regular contact, but that doesn’t mean they don’t need a little love and care too. While I’m often a little hesitant and full of self-doubt (they couldn’t possibly want to hang out with me, could they?), once I know someone isn’t going to reject me, I make an effort to stay in contact and hang out when possible. Because of all of this, I’ve collected a large number of friends and acquaintances I want to see and spend time with at cons.

The lightsaber would win, but Negan is still a jerk.

I hear you saying, “That’s nice Ang, but what’s that got to do with giving us gaming advice?” Well, having to decide between which friends to game with isn’t a problem exclusive to me and my Origins experience. The more involved you are in the gaming community, the more you’re going to be faced with choices. It’s definitely a problem of an abundance of riches, but it’s still a situation that can require careful navigation.

Maybe, like me this year at Origins, you have different groups you need to choose between at cons. Maybe it’s just a matter of having two local game groups you want to play with. What if you’ve got more people that want to game than fit comfortably in one group? Decisions need to be made and I know I don’t want any hurt feelings anywhere along the way.

Be realistic with your time. When trying to juggle between different groups, it can be very easy to over-commit yourself, but that’s not going to be doing you or anyone else any favors. Whether its planning out your con or deciding how many games you can handle during any given week, know your limits. This Origins I almost committed to a 9am game in the effort to hang out with someone cool. Thing is, I’m a night owl and don’t do mornings. Forcing myself to get up and show up to that game would have not endeared me to anyone.

Don’t fall into the new shiny trap. Be mindful of not neglecting old and familiar friends in the face of the shiny new people you’ve started to collect in your life. Sometimes this is inevitable as interests begin to diverge and friends grow apart, but it’s important to be aware that it’s happening. It sucks if you realize you’ve hurt a relationship with one group to hang out with another group. This Origins I somewhat neglected some of my older gaming friends, but I did so knowing I’ll get to hang out with many of them at another con this Fall.

ALL the foam weapons.

Make plans and stick to them. This particular piece of advice can be applied as much as fits your particular needs, but I know it helps me to make specific plans with people and stick to them. This way I can try and balance the time I spend with the gamers I want to play with. When I planned my con schedule, I made sure to slot in games or make meal plans with specific people so I knew I’d get to spend time with them. This is going to apply to my home group as well as this summer we’re gaining at least two more players and we’re probably going to split into two games to accommodate everyone.

His eyes lit up too!

So, there’s some advice on how to balance the social choices you may face when you know way more people than you realized you did. When the hell did I ever become the social butterfly? Either that or it was an excuse for me to share a whole bunch of Origins 2017 pics.

Have you ever had to deal with making a choice between who to game with? I’d love to hear your stories and how you dealt with it all.

(NOTE: I utterly FAILED at getting a #tableselfie for the first game, which was a Dresden Accelerated game run by Tom of Knights of the Night. My bad.)