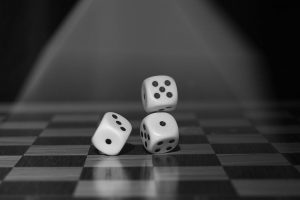 Gamemasters (GM’s) occupy an unusual position. They have great power over the game, adjudicate the rules, and make major decisions. Sometimes they willingly give up that power, rolling dice and letting fortune decide the outcome. GM’s are not really players, but they’re not quite “not players” either.

In this article, we’ll look at when and why GM’s roll dice. Sometimes it’s easy to know when a GM should roll; but sometimes it’s not as clear. This article is not meant to provide rules for GM’s, merely a deeper look at how we decide when to roll ’em.

NPC’s in Combat
In most games, if a player character (PC) rolls to hit in combat, a GM will roll for a non-player character (NPC). This simulates the stress and randomness of combat on both sides. Similarly, if damage is rolled randomly by players, the same rules apply to NPC’s. Some games streamline the GM’s rolls by using an average damage value.

Similarly, if players get to make a saving throw against a spell or other effect, GM’s generally roll those for NPC’s as well. All these rolls are done to simulate a more level playing field during combat. Fighting is rough business for both sides. Morale is another form of saving throw. Some games have GM’s roll to see if an NPC will remain in combat or flee.

NPC’s in Non-Combat Situations
Similarly GM’s may roll for NPC’s for physical challenges. Perhaps an enemy needs to make a CLIMB check to get to the PC’s. Perhaps a retainer needs to cross the same raging river as the PC’s. Perhaps the PC’s singing partner could lose their voice during the final round and Usher won’t choose them.

To Add Randomness
Some GM’s enjoy introducing a little randomness as they run their sessions. They’ll roll dice and consult tables to determine wandering monsters, environmental hazards, local holidays, and the nearest star system. This approach will certainly stretch your improvisational skills during play. More cautious GM’s (like me) might consider using these tables beforehand. That introduces a little randomness, and can sometimes produce ideas we wouldn’t have considered otherwise.

To Resolve Uncertainty
Roleplaying games allow players to do ANYTHING. Sometimes there won’t be a rule for what they’d like to know or try. Sometimes you don’t want to stop the action to look up an obscure rule. In those cases, consider using the GM’s secret weapon, the humble six-sided die. On a 1-3, things go in the players’ favor. On a 4-6, they don’t. Feel free to adjust the probabilities on a case by case basis if you like. Is there a knife in the room? Does the apothecary sell healing potions? Will Tony dance tonight?

To Create Tension
Secret GM rolls can be used to increase the tension at the table. For example, suppose the party is deliberating for a LONG time. Roll behind the screen, look at the dice and ignore the numbers. Then make a concerned face. See if that gets them moving. This technique isn’t for every GM or every situation. You may not want, or need, to bluff your players. Even if you do use it, use it sparingly. Otherwise players may suspect that you fudge many of your rolls.

Concluding Thoughts
The GM doesn’t even have to roll dice. Some games like Dungeon World resolve all actions based on player rolls alone. Other systems could be adapted to eliminate GM rolls, perhaps with a degree of success/failure chart. However, in most games, you’ll need to roll some of the time. Hopefully this article provided some food for thought about when and why we roll.

3 Responses to IN THEORY: Gamemaster Rolls