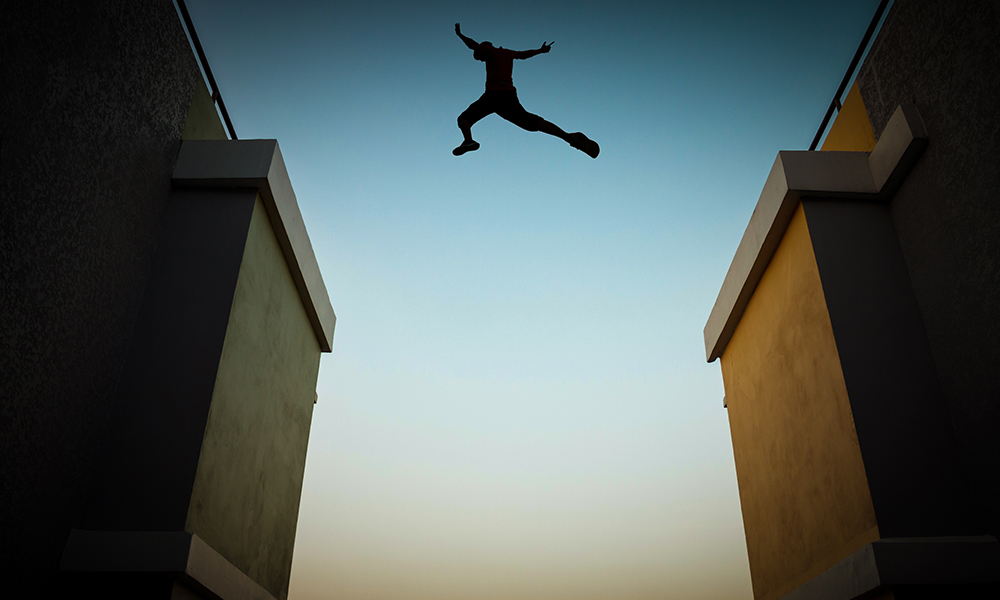 I mean, make the leap. What’s the worst that could happen?

A few months back, during a short Star Wars campaign, my character made the brilliant decision to put on an enviro suit, go outside the space station built inside an asteroid, and try to sneak up on an Imperial troop ship blocking our landing bay.

One of my friends looked at me with a raised eyebrow, “Okay, let’s say you actually get onto the ship. What are you going to do once you’re on a troop ship that’s full of elite Stormtroopers?”

“One impossible problem at a time!”

Too often, we hear stories about players getting caught up in analysis paralysis as they try to account for every possible contingency before they act, and as a result the action of the game stalls to an interminable level. As if any plan actually survives first contact with the action or the enemy. I’m here to say that sometimes it is more fun to just dive in headfirst and see where the action takes you.

Now, most of us GMs have been at a table where we’ve had a player declare their action and the rest of the table groans and we go, “What?” There’s a reason many GMs swear by the adage that if you play stupid games, you win stupid prizes. But there is a big difference between being what my college group used to call ‘chaotic stupid’ and taking an impulsive action. The type of players who earn the ire of their fellow gamers and the GMs are often immature, inexperienced, used to a different play style, or are just being deliberate trolls. That’s not always the same thing as a player getting an understanding of the situation and having their character take an impulsive action.

Think about it from the perspective of your character having a split second to make a decision on the problem in front of them and go for it.
Around the time my Star Wars game happened, another gaming friend shared a story of how his character watched the villain throw a child off a boat into shark-infested waters. My friend described how his character immediately dove overboard and yeeted the child to safety. This, in my opinion, is the epitome of one impossible problem at a time. Sure, my friend now had to deal with the fact that his character was in shark-infested waters, but that didn’t matter. He did the heroic thing and saved a child. Figuring out what to do about the sharks was the next problem.

So, let’s take this from the perspective of both players and GMs.

Some advice for players:

Some advice for GMs:

Much of this is a dance of finding the right balance between the players and the GM. We all want our games to be exciting and unexpected, so players need to trust that their GM is going to allow room for the players to do the impulsive thing, while the GM needs to trust that the players aren’t trying to wreck the game. If you can find that balance, I guarantee you that facing one impossible problem at a time is the way to go.

2 Responses to One Impossible Problem at a Time