Let Players End Scenes Early To Speed Up The Game 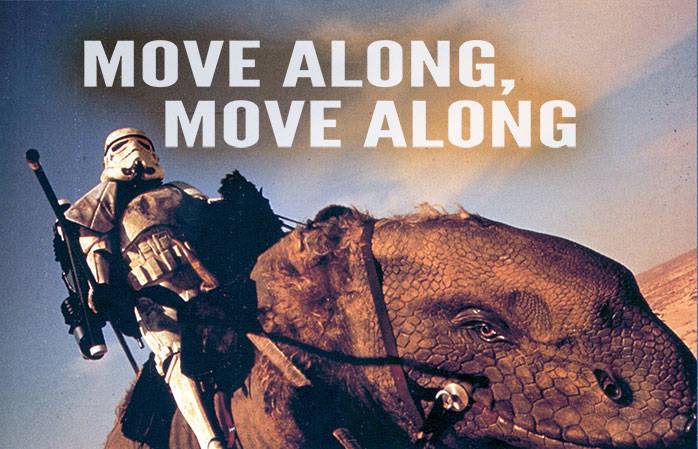 One of the things that marks my GMing style is the fact that I try to keep my games nice and tight and avoid unnecessary distractions. If something that my players are trying to do is easy enough to accomplish, I let them succeed at it. Shopping trips happen off screen unless there is an interaction of importance or the players feel like it would be fun to play it out. Generally, this has served me well and created very fun sessions that focus on the cool things the players do instead of the minutia and details that aren’t that important.Â  One downside this causes is that I tend to rush the endings. The players are so close, the final battle is just around the corner and we’ve got about 45 minutes left…

But then things take longer than expected, the players spend a good chunk of time planning and I didn’t want to interrupt them, and once they are done with the battle we’re 15 to 30 minutes over and people have to rush home. Since I want to end the story and start with the next arc when we meet again, I usually end up rushing through the denouement. But the other day I came up with an idea to kill 2 birds with one stone.

Give The Players The Option To End One Scene Early

Sometimes, no matter what, some scenes tend to drag on. The players may be working towards some goal that you don’t quite understand or a combat or negotiation is just dragging on. Sometimes a scene just isn’t working and the players seem like they’d rather just move one. So give them the option to end one scene in the game early. Here is a scenario to illustrate the idea.

The characters are trying to garner a piece of information from the space station’s lead security officer. They’ve disguised themselves and are trying to work around his defenses. The Game Master doesn’t want this to be too easy, but the players are getting a bit frustrated. They’ve made some good rolls but haven’t asked just the right questions to get the information they want. Suddenly, Laura whips out a card that the Game Master gave to the players at the beginning of the game. On it are the words, end this scene successfully. “Hey, I’d like to move on and we haven’t used this yet. Everyone else for moving on?” Two other players are for it, the last seems non-committal. It’s a majority, so you take the card and begin narrating their successful verbal maneuvering around the security officer or you ask the players to narrate how they get the information and write that into the canon of the story. Once this is done, you tell them what it is they would have gotten from the security officer and they push forward. The players aren’t stuck in a scene they were getting frustrated with and you’ve got 30 minutes more to develop more interesting parts of the story.

This gives the players the option of saying we’re stuck, give us a hint. Many games offer options like this with storypoints, but this idea is more about ending an entire scene. The general layout of the plan is this:

And that’s it. The game moves quicker and you don’t get bogged down in quicksand scenes. In fact, here is a card to use in your games. Feel free to print it out on cardstock or 3 by 5 index card and make use of it whenever. 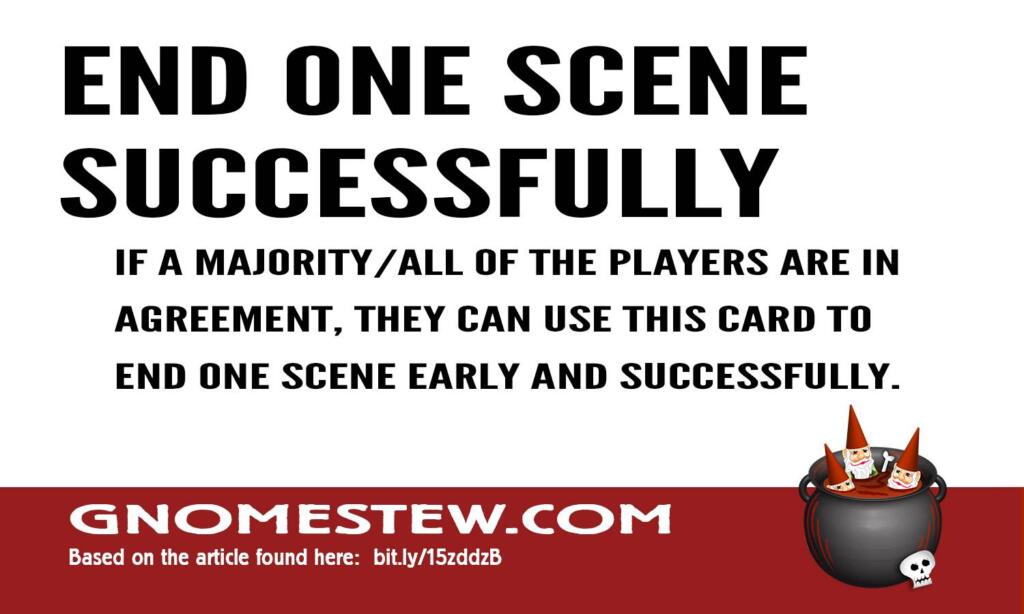 Being A GM is About Leading The Group, But Boring Scenes Probably Aren’t Your Fault

Your role as GM is to provide a counter to what the players are doing and there are hundreds of reasons that a scene could be dragging on, so don’t assume that a slow game or scene is your fault as a Game Master.Â  It just happens and you should never take it personally. Planning Paralysis, each player having a different agenda, tiredness from the work-day before a game, a long session, not picking up on clues, etc. are just a minimal subset of reasons that a game might be slowing down. Often, the nature of a collaborative game is such that you will get bogged down no matter what. So a tactic like this is meant to give a bit of a reset and keep a game flowing.

A committee is a group that keeps minutes and loses hours. – Milton Berle

So, what do you think about giving players the power to end a scene early in your games? Is it giving up too much Game Master control or do you feel that letting players control some of the flow of the game makes a better overall game? What other techniques do you use to keep your games moving along?