Back in ye old days of college, the gaming group I played with had an ongoing Champions campaign where our characters were super-powered teenagers attending a private boarding school in the northeastern US. The school was most definitely NOT called Xavier’s School for Gifted Youngsters, but that was only because the GM didn’t want to deal with canon characters from the Marvel Universe. Whenever anyone commented on the similarity between the game’s setting and its inspiration, the GM would just smile and say something along the lines of, “Steal an idea, but do it justice.” 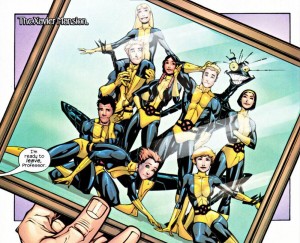 The X-men were awesome, but the New Mutants were like my friends. They were kids like me when I was reading. Even years later, the series has a special place in my heart.

The game was quite clearly based on the New Mutants, but the GM wanted to create new stories rather than have the players fixated on things that had happened in the comics. Playing in a canonical setting with pre-existing characters can be fun, but it brings a different set of problems to the table. No one wants to see a favorite character played badly, which, at its worst, can be as annoying as nails on a chalkboard. So, the GM moved the setting to outside of Boston, gave the school a different name, a history of its own, and a whole new supporting cast. We had the flavor we were looking for, but the story was free to be about Allison, Kyle, Fuzzy, Gabriel, and Duke instead of being about Dani, Sam, Rahne, Bobby, and Illyana.

It’s only natural that we use ideas from stories that inspire us to help fuel our roleplaying experiences. Gamers often develop easy shorthand for referring to games by referencing TV, movies, books, comics, and pretty much any other source that tickles our collective nerd fancy. Describe a Hollow Earth game as ‘Indiana Jones fighting Nazis AND dinosaurs INSIDE the planet’ and you get the idea of the game across instantly. The same idea holds true for creating characters. When one of my players told me that his Eberron Half-Elf was charming and smooth like James Bond, I knew exactly what he meant.

The biggest problem occurs when the source of inspiration is taken way too literally. Talk to any GM that ran D&D games in the late 80’s or early 90’s and they’ll shudder at the idea of someone, anyone, playing a character based on either Raistlin Majere or Drizzt do’Urden. While it can be incredibly painful to watch someone play a canon character poorly, it is arguably worse to watch someone play a character that is stolen wholesale from an overused source. They may have filed the serial numbers off the character and given them a new name (like Niltsiar or Dritzz – see, totally different!), but everyone knows they’re trying to play THAT character. And usually doing it poorly.

What brings all of this up? Recently, a friend invited me to play in a new Dungeon World campaign. The setting is loosely based around the Planescape setting, so he encouraged us to play whatever our hearts desired. Right now, I’m on a Farscape kick (see one of my previous articles) and I love playing rogues and thieves, so I immediately thought about playing a character like Chiana. So, what can I do to turn her into something that still flows from the Chiana inspiration, but is still MINE? 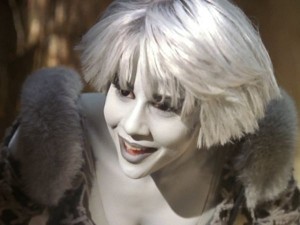 I got to meet Gigi Edgely, the actress who played Chiana, at GenCon several years back. She was absolutely awesome.

Distill the concept down to the elements most important to you. In one of Chiana’s early episodes, there was this exchange between her and Crichton:

Crichton: I thought you were Junior Miss Tough-Chick of the Universe.
Chiana: Yeah, when I can kiss or kick or cry my way out of it. This is way way way way different.

Right there was the essence of what I wanted in my new character. Regardless of skills or background, I wanted someone who had combined a rebellious nature with a survivor’s instinct. There might be other pieces of Chiana I’d want to use, but the most important aspect to keep would be that.

Another example was the first character I made coming out of my gaming dry spell in the early 2000’s when I got a chance to play in an online D&D game with some Everquest guildmates. When asked what I wanted to play, all I could think of was Legolas. Despite my slightly embarrassing crush on Orlando Bloom, the core of what I really wanted to play was a kick-ass elven archer.

Put your own spin on the rest of the character. Chiana was from an oppressive and conformist society that would ruthlessly ‘cleanse’ the minds of those that were found to be uninterested in conforming. I didn’t want to go that direction for my character, but I wanted to have a similar reason for running away. For her, I created the Ozinti, a rigid, militaristic society with a strong caste system. The differences might be minimal, but it will allow for a different flavor in how the character is played.

For my archer, switching the character’s gender instantly spun her away from being an exact Legolas clone. There was also no epic Fellowship to be joined, so her background required a different reason to leave her elven homeland. After considering it for a time, I decided she was fleeing an arranged marriage that would have taken her away from the wilderness she loved and forced her to pick up the political duties her family felt she should be paying more attention to.

It’s absolutely crucial you put your own spin on the character in some way or another. You may be creating the character based on the similarities to the original source, but acknowledging the differences will help keep things fresh. The differences can be huge or subtle, but it’s important that they’re there.

During the game, keep in mind that you are playing YOUR character. I haven’t started playing Ash, the Dungeon World thief, but I’m already thinking of how I want to play her. There will always be little bits of Chiana in my head when I bring her to life, but I’m also firmly keeping in mind the ways I want her to be different. Ash might have a similar outlook on life to Chiana, but once she meets the other characters and the world the GM is creating, I’m sure I’ll be able to give her a unique spark of her own.

Khiana very quickly veered off from any resemblance to Legolas, and I wouldn’t be surprised if the other players were unaware of the original inspiration. Much of this came from the way she interacted with the other player characters in the game. I discovered that her temper was a bit more volatile than I had expected and there was a great deal of (mostly) unresolved romantic tension between her and one of her companions. It was a fantastic game that I think about often and regularly wish I could recapture.

Once you’re playing the character, give them a chance to grow and change with the way they interact with the other player characters and the world the GM is creating. Push away your preconceived ideas of who the character was inspired by and be flexible enough to accommodate any changes that happen once you start playing them. Every character should grow and change as they’re played, even ones inspired by a specific source.

While all of this is important for players and their characters, as suggested by the beginning of the article, it’s also important for GMs and the games they run. Pretty much all of the same advice holds true, just in a broader perspective than would be useful for a single character. Whether you are looking to create a single plotline or an entire setting, distill your source material down to the essential elements you want and then throw your own spin on it. While that early Champions game had an obvious source, it was different enough that we felt free enough to create our own characters without worrying about knowing too much about the Marvel Universe. 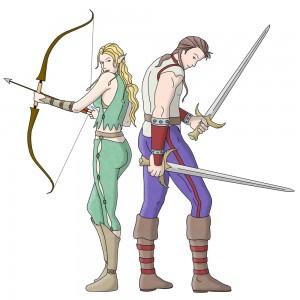 Khiana and Aeric, another character from that game. I actually drew this one myself and I’m moderately pleased with how it came out.

One final example was a game I played at Origins this year. It was an excellent example of a GM being inspired by a particular source, but putting his own spin on it. The event was called ‘Bureau 13: The Cult of a Thousand Faces’. It was a Savage Worlds game run by Dave Russo with Amorphous Blob Games. The description read: “Your team is dispatched to San Francisco’s Chinatown to investigate a series of strange occurrences. A number of disappearances and a sharp increase in what the police are calling “gang-related violence” has someone in the Research Department jittery, and you are the nearest available assets.  Sounds like just another day at the office…”

Just like it sounds, the PCs were an investigative team looking into strange and weird happenings around the country. Given the mission to look into what was happening in San Francisco’s Chinatown, we dove right in with our investigative best. To a certain degree, it felt a little X-files-esque, but as we got closer and closer to what was really going on and the climactic point of the game, we realized that our GM had very deftly given us a game inspired by Big Trouble in Little China. It was a fantastic game that was greatly enhanced by its inspiration.

So, have you ever run a game or played a character inspired by a very specific source but made it your own? Or do you have some horror stories about someone ripping off a character poorly?

3 Responses to Inspiration Without Duplication