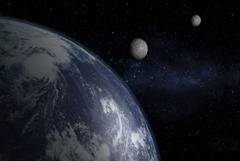 I saw this nifty article yesterday and it got me thinking about what most of our fantasy settings are like – a medieval or renaissance Earth-like planet that has magic… Ok. I get it from the perspective of playing off of themes we are familiar with, and I know our industry started out with a medieval war-game, but why not make fantasy settings really unique? With magic, gods, epic wars, and other, well, fantastic elements, we have some license to stretch the boundaries of geography and physics. So here are some unique geographical elements that you can add to your fantasy world.

1. Ok, we’ve seen multiple moons, but why not a habitable, reachable moon..

Having a moon that is reachable by airship, magic, technology, or some other incredible means opens up a lot of possibilities. Maybe the “ancients” lived there with technology beyond the ken of mortal people. Maybe it is where the gods live. Perhaps the PCs live on the habitable moon and fear the people of the world below. We are used to wars between continents or groups on terrestrial land, but the conflicts and stories that could occur between people who are separated by even vaster differences, but are not from different planets. A moon is still part of the planet it orbits. It still feels like part of the world. So the conflicts and stories that could occur between a planet and it’s moon can feel alien, yet appropriate.

2. The Rings Around The World

A fantasy world I work on has rings around it. I was never quite down with the concept, and the designer of the world had some pushback from me and a lot of other developers, but he insisted and they got incorporated. Until I saw this, I didn’t really get it.

Having rings around a planet makes it feel less mundane, less bland. It’s not a big change, but having a planet that is just a few degrees off of our real world enhances all of the other fantastic elements, like magic or fantasy races. 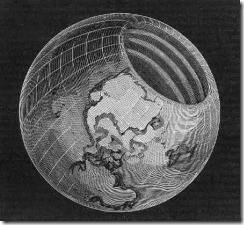 Well, it’s a pretty good chasm…  In a lot of fantasy games, we have the idea of an inhabited interior of the earth. Whether it is the Underdark or the hollow earth, the concept of things living inside the earth is somewhat accepted. So think about having a big chunk of the world ripped away, a giant chasm that everyone knows about. It would expose the underworld  and change the way that connects with the overworld. Perhaps it is a trading zone for miners from the chasm to trade with sailors from above. Maybe the Drow or other races that live in that part of the underworld are culturally different from their more secluded brethren. Like the habitable moon idea, a giant chasm creates an opening to a new world that is still part of the planet as a whole. It is considered part of the world, but there is freedom to operate in different ways.

One idea I’ve always liked but never seen done is that magic portals exist and are known to the populace. Large cities build up like airport travel hubs. People walk through the portals to lessen travel times. Maybe the portals connect in non-useful places, one in an ocean and the other 90 ft up in the sky, creating a waterfall in the air and being the head of a river.  Add in an element that most of the portals are stable, but that newer, less established ones appear and disappear without a pattern, and  you’ve got some great world-changing plot hooks. “The portal that leads to the mystic’s cave only appears once every few years, so we have to get there soon, before it disappears.” “Oh, crap, a portal opened between the fell lands and the imperial city… Well, the goblin army is ready to attack, now. Time to try to rally an army for defense, or find a way to close the portal.” “Shoot, we’re losing this fight. I saw a young portal over by the cliff. Jump, it’s the only way to live… Well shoot, where are we now….”

Having fantastic elements in a world is great, but what about areas that never stay the same? Faery woods are one example, but what about a desert that blooms over with flowers and trees in the course of one day, but then fades again to desert. Travelers would have to plan carefully and hope luck was on their side. Giant elementals could trudge the lands, leaving a swatch of…. well, their element in their wake. Rivers, forests, trenches and mountains, deserts or burning slag, could all be outside your door when you wake up, providing a new and unique challenge for players to overcome. Messengers could warn of the changing sands moving closer, or the appearance of an earth elemental. Farmers might try to coax water spirits nearer in order to improve their luck.

Fantastic elements already exist in our fantasy settings, but the malleable nature of gaming lets us experiment with even wilder elements than we currently do. Add a very unique element to a predefined setting and see how it changes the play style. See if something more incredible might spice up a homebrew setting. Or do you prefer vanilla worlds that are metaphors for the real world? What style of world/setting do you most enjoy?