The Story
The last game session I ran had two very interesting moments in it. The first moment was when the players were debating where to sell off some loot they had acquired from a dungeon. After much debate they chose a religious college that is very reminiscent of Cambridge. In bartering with the Deans of the college, they had the chance to take 15,000 Saren (currency in the world setting) or 13,000 Saren and receive honorary degrees. As if they were working with one group mind, they all perked up and said hell yeah the honorary degrees.

A good 10 minutes was spent discussing what these would entail and that they would have no game effect. Another 5 minutes was spent with them deciding what their degrees would be. One character chose to have a doctorate in inter-dimensional relations, another chose to have a doctorate in “conflict management”(i.e. Assassination) , while the final character chose a degree in Hoplology, the study of combative behavior and performance. These degrees gave them no extra skills or in-game powers or abilities.Â  Just honorary degrees for cutting their prices. Still, it was one of the highlights of the game and one of the most enjoyed moments.

The second moment in this game that featured an “intangible” reward was when the players decided to pool some of their experience to purchase a special power called Homebase. It gave them an unstatted,Â  non game affecting “Place” of their own design. The power states that the players work out details of the base with the Game Master, but that it doesn’t grant any kind of mechanical bonuses and only acts as a location that the players own and can make use of.Â  The players decided that the base was going to be a floating island (an island that floats high in the stratosphere) since they had an airship (which can take them from place to place) as a reward from another adventure. Once the base was acquired in-game, through a short-formed encounter with an old man looking for the resting place of his son, a good hour was spent determining the exact details of the homebase. 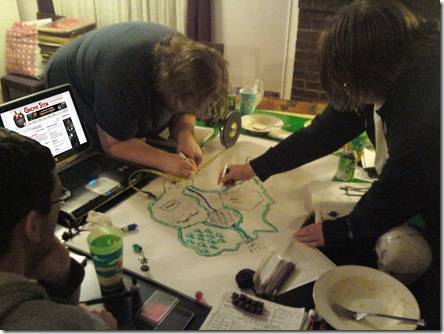 Though it involved no real gameplay, and the night had many great moments, this was the most engrossed I saw the players all night. While there were things we could have gotten to if we had left the details of the island abstract, it was more fun for the players to work out their holdings. The interesting twist, most of what they set up on the island were future expansions, such as the village for the support staff, the farm so they could be self-sufficient, and the magic items that would keep the river flowing and create waterfalls. The level they purchased the homebase at granted them very little, just access to the island and accommodations for 3 to 4 people. They were prepping for the time when they could purchase the upgrade and make nifty, completely thematic elements. While they did eventually brainstorm ways they could use the land to turn a profit (outside of the power’s stipulation that the base would sustain itself without constant PC upkeep) the elements they focused most on were completely without tangible, in-game, mechanical reward.Â  This is a picture of their final drawing of the island as it will be in the future. 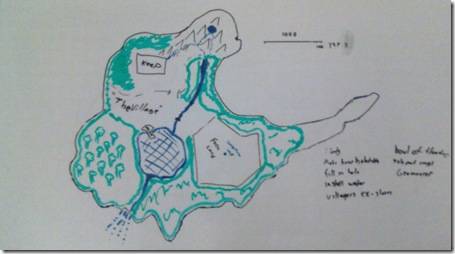 The Moral?
While there was loot of a more standard variety (+1 swords, cash in the pocket, etc.) it was obtained and quickly forgotten. Even the more story-driven, fluff based rewards that had a mechanical effect (a magical library that granted them 1 free skill level each, once) from earlier sessions were not received with nearly as much enthusiasm.Â  Why were the honorary degrees and the homebase so much more fun? Character development. The rewards were more about adding something fun to the characters in terms of building the story of the characters up. The honorary degrees had no effect, but they gave the players a different sense of their characters. The homebase radically changed the feel of the game for the players. Their adventures for the night continued without paying another visit to, or use of, the homebase, but it kept getting brought up. Both of these elements added something to the characters that enabled new growth and goals. A skill, a more game affecting power, or an item that granted a new ability per the rules might have affected the game more, but the intangible rewards that added to the characters affected the “play” more.

Jeff Tidball put a great article up on gameplaywright about how a story placed behind a minor worth item increases its value exponentially. It is a perfect example of this effect. Think about the rewards that you are giving out as a Game Master and their effects on character development and the story. I’m willing to bet that rewards focusing more on the character development and story will be more fun for the players than just plain mechanical game affecting rewards.

So, what do you think? What are some of the coolest rewards that you’ve given or gotten in a game? Were they more based on mechanics and loot or where they more character centric?