Many years ago my wife and I invested in a nondescript color inkjet printer, one that did border-less photos and had a good feature set. The thinking was to print out photos and do a bit of scrap-booking. Well, time and a shift to a digital lifestyle mostly killed that dream, however the printer still gets a fair amount of use as my role-playing prop-maker!

The 4×6 photo size—and 5×7 to a lesser extent—is nearly the perfect size for handouts. It’s roughly the size of an index card but you can print anything you want on it! As a player I’m hooked to these things, making my own player aides. In D&D 4E a 4×6 card cut in half could be used to make your own customized Power Cards, long before Wizards jumped on board that bandwagon themselves.

As a GM I use them voraciously, as either handouts or to hold NPC data points. Plus I just can’t help myself and poke around in InDesign or Photoshop and turn what could be a bland experience into one with a bit more graphical punch. Sadly, I didn’t have time to dig through my archives for some good examples when preparing this article; my only two samples are not my best work, one of which is a player aide. 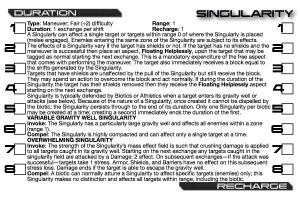 For example, in Star Trek the totally awesome starship construction and combat system—that I may or may not have written, ahem—lends itself really well to Maneuver Cards. Slot a maneuver on a 4×6 card and since maneuvers can chain into one-another, interlock them like puzzle pieces, building your own “maneuver flowchart” for the round, as a matter of example.

In a Stargate SG-4 game, “The Working Hour,” there was the vehicle of a repeating time loop. My 4×6 cards came to the rescue for player handouts allowing them to bypass NPCs and “claim” objectives. The intent being, once you’ve successfully convinced General Hammond that you’re caught in a time loop—having role-played the conversation once—we then have a prop to indicate that in the future you don’t have to do that task again. 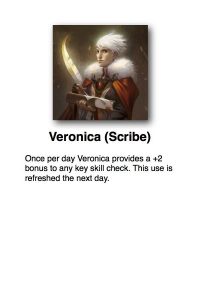 In D&D the prop cards reared their head again as consumable items (resources) that the party could use as part of a research mini-game. Convert an NPC to your cause and then use them as a renewable or single-use resource to achieve a bonus towards the story objective which had a hard timeline associated with it.

If possible I recommend getting matte photo cards. They’re a bit harder to find but the typical gloss versions have their obvious drawbacks. Plus the matte ones are easier to write on and erase if the card is used to track a mechanic of some kind. Because of their ease of making, I consider these cards disposable; I’ll routinely make a new player card for each session.

Preferably your printer can handle border-less printing. It’s not a deal-breaker if it can’t, it just limits the amount of printable area you’ll have available to you.

Finally, ink. Inkjet ink can smear if you toy with it before it properly dries, but most photo paper will hold the ink really well. Sadly, because it’s not as durable as laser printing, writing—and especially erasing—on your prop can also smear the ink. Consider using something like a paperclip to track progress on a side callout box as an example.

I’m a sucker for good props. Share your tips on using your photo printer with us below!

Solo Gaming in the Time of Covid

The Power of Cliché: Why Being Original Isn’t as Important as Being Interesting