How Lucky is Your Game? 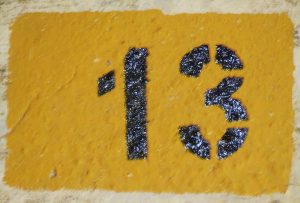 Luck comes in many shades and flavors in roleplaying games. Some games actually build in a mechanic to emulate luck in varying ways. Others have an inherent kind of luck with a bennie, plot point, or some other token type of system. Even games that have no mechanical way to represent luck are still dependent on the fickle fate of the dice. Given today’s connotations as a day of bad luck, I thought it might be worth taking a look at the nature of luck in our games.

Luck as a Mechanic

Back a bit over twenty years ago, the game of choice among my group at the time was Champions. I clearly remember how everyone at the table would groan and throw things if we found out someone had purchased the disadvantage ‘Unluck’. Every single time, it was pointed out that ALL the characters in that game inherently had bad luck, but buying the actual disadvantage opened the door for the GM to really screw us over. Even if you bought the ‘Luck’ advantage, you were only delaying the inevitable.

Most mechanics for luck seem to boil down to an opportunity to reroll a bad result. While not particularly flavorful, it does allow a player to mitigate a potentially bad situation with a new roll that will hopefully have a better result. If described in the right ways, it can emphasize how lucky the character is as they catch just the right set of circumstances to come through disaster clean and smelling like a rose.

Other games may have a built in luck available to all the characters. Whether it’s a bennie, a plot point, or whatever token the game calls for, everyone has the opportunity to affect the dice or other aspects of the game. Savage Worlds even combines the two, where having the ‘Lucky’ advantage gets you an extra bennie to start with. Ultimately, it can be a cool way to represent how the PCs are the protagonists and tend to be luckier than the average NPC. 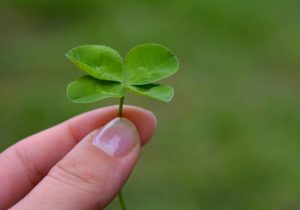 Luck as a Power

Super hero games often go a little more in-depth into the subject since luck is often set up as a power or the source of powers. In high crunch games or for GMs that stick strictly to the mechanics, this still may just be an enhanced version of allowing rerolls for bad results, but other games can try and throw a little more flavor in the way it’s handled. Does it just affect the character’s rolls, or can they grant good luck to friends and bad luck to enemies? Maybe it even goes further than that and they can affect the environment, allowing things to be in place just when they need them or let them always be in the right place at the right time. Serendipity can be a powerful ally.

Other genres can also bring in luck as a type of power. Settings with magic will often have spells that grant luck’s favor, or even have curses as a form of bad luck. Instead of being a mutant power, it’s all in the magic and the spells cast.

Luck as the Nature of the Dice

Pretty much every gamer I know will grumble and swap one set of dice for another if they’re getting too many bad rolls in a row. Some may do it subtly, so as not to seem like they’re superstitious, but a series of botches will make even the most logical gamer quietly try and switch things up. Heck, my D&D dice bag has four sets in it that I regularly switch between during a game. Sure, it’s all a little silly, but the relationship between gamers and their dice must be respected.

Of course, most RPG systems factor in other things than just the randomness of the dice. In many games, even if a character rolls very low, they’ll still succeed at something they’re specialized in. A couple of times after doing the math, I realized the fighter in my Eberron game would have to roll under a 4 on a d20 just to miss whatÂ it wasÂ they were fighting. Luck still plays a part, but it isn’t the only factor when the characters are focused on what they do best. 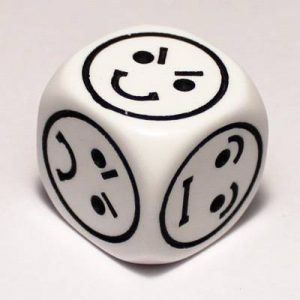 Luck as the GM

“I leap over the bar and hide behind the counter. Is there a shotgun back there?”
“I don’t know, let’s find out.”

When I GM, I often have a judge die at the table with me. What’s a judge? Well, it’s essentially a smiley face d6. The faces range from sad, happy, angry, and even a little bit of evil in between. Whenever the players ask me something about the game that I hadn’t already determined or have an investment in being one way or another, I’ll roll the judge die and see what comes up. That helps me determine what the answer to their question is.

Happy face comes up and I’ll probably give them what they want. Sure, the car’s trunk has an emergency escape latch. Sad face often means things aren’t what they were hoping. No, there aren’t any windows facing that direction from this room. An evil grin might mean that they get what they want, but it’s not all they’d hoped for. Yes, there is a chandelier within reach from this balcony, but you’re not sure how much weight it will hold.

Even without my special little die (which is an idea I totally borrowed from a friend) I’ve seen plenty of GMs simply ask “odd or even” when posed with questions like these. If the player calls it, they get what they asked, or something close to it.

There are plenty of ways to introduce a touch of luck into the game. Even if you’re a prep heavy GM, there are going to be plenty of little things you won’t have considered, so why not let the dice help out? If you’re an improv heavy GM, you’ve probably already developed your own method for dealing with these type of questions.

Personally, I’ve always been fond of Friday the 13th. Having turned 13 on a Friday the 13thÂ has a way of helping cure any particular fear of bad luck since you’re always going to be coming face to face with that particular monster. Give me your 13s, your broken mirrors and all the black cats and I’ll be quite happy.

So how does luck factor into your games?

4 Responses to How Lucky is Your Game?