Troy’s Crock Pot: A Taste of Improv at GenCon

Regular readers familiar with my GMing style are aware that session prep is a strength. Now, such an approach still requires thinking on my feet, such as whenÂ the players turn left (when I anticipated that they wouldÂ turn right), then I would still have an appropriate encounter or response at hand. 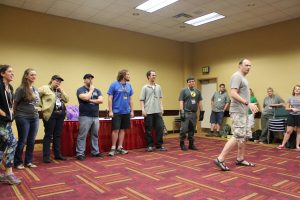 Improvisation, however, is largely a foreign thing to me. The technique of GMing on the fly with little prep and a willingness to riff off the ideas of others at the tableÂ is as elusive as trying to grab a handful of water.

Of course, I listen to player input. And their ideas offered during in-game conversation is clay to be crafted into the gaming experience.

In a nutshell, rolling with the punches is one thing. Working without a net — the essence of improve — quite another.

Yes, EngineÂ Publishing even produced a primer on improvisation (Unframed, featuring essays from quite a few excellent gamers and industry pros) which is aÂ top-shelfÂ resource on the subject.

(I excused myself as a contributor on that project — after all, what could I say? I am the anti-Improv guy. Much better that you heed the advice of such contributors as Jannell Jaquays or Stacy Dellorfano, among others.)

So, knowing that improv is a sure weakness of mine, I enrolled in an hour-long introductory session at GenCon. The session was run by Industry Insider Ryan Miller, a former Wizards of the Coast employee, and his wife.

First off, they extolled the technique for roleplaying, noting how freeing it makes the experience. Essentially, it opens the GM to the act of discovery. By not knowing what is coming next, the experience stays fresh. It is the proverbial hot potato thrown into your lap.

Much of the GenCon seminar was devoted to having everyone participate in improv exercises — imagination and pantomime games probably not out of place during any actor’s workshop. This was designed to get us in a mood to “go with it.” The key aim of the exercises, such as passing an imaginary ball or rapid fire word games, is be prepared to listen to the other person and reply on topic.

The test came when we were asked to line up and create a story on the fly, buildingÂ on each other as the moderator pointed a finger at us in turn. It reminded me much of collaborative story creation, of the sort a game such asÂ Story Cubes encourages, except the pace of the game is far quicker.

So, the first time I took part, I was able to contribute. Mainly, because I was ableÂ to keep pace, keep the story in my head.

However, the second game, which had a quicker pace and a subject matter that was harder to follow, flummoxed me.

When my turn came, I froze. Eyes wide, drawing a big blank, an emptiness with nothing to say. I believe I said, “Uh.”

Yeah, still a blank. And I just can’t blurt out anything without thinking. It’s not in me. After too long a pause, they moved on.

Let the sirens blare. For me, it was an epic fail.

So, what was my take-away from the session?

First of all, I can say that a great many of the people in the room really embraced the exercises and techniques. There was a lot of enthusiasm for what was happening.

And just because I tanked, and am pretty sure I won’t be running any improv games, I’m glad for the experience. There are listening exercises that I picked up that have real utility at the table.

But the rapid-fire process is akin to the sort of brainstorm sessions I’ve experienced in the working world. And while I understand the value of spitballing ideas, I’m not convinced it always produces the best results. I’m one of those folks whoÂ need to let ideas mull a bit, swirl them around and let them ruminate.

The first idea that pops into your head is not necessarily the one you go with.

But whether you are a GM who likes to fire from the hip or work from a plan (like me), I found the session to be rewarding and would recommend it. So, if it, orÂ something like it, is offered at the next GenCon, please think about giving it a go.

5 Responses to Troy’s Crock Pot: A Taste of Improv at GenCon