Encouraging Cheating at the Table 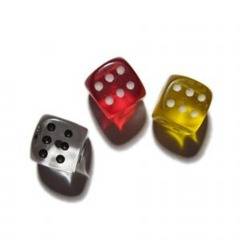 So, this is a completely horrible idea for several reasons, but it’s not without it’s own twisted charm: Why not as a group, decide that everyone should be able to cheat as much as they want, provided that they don’t get caught?

Of course, the first question is: “Why in hell would you want to do this?” For the most part, we’ve all played with the guy who constantly cheats and no one ever likes it, so why would I suggest that everyone cheat? The thing is though, that Role Playing Games are based on the concept of the heroic exploit, Tales of derring-do, of testing your wits and mettle against the forces of evil (or at least the forces barring your way). And the further thing is, that wit and cunning are a big part of that tradition. Heroic tales routinely hinge on the hero tricking his foe into a fatal error, or manipulating them into serving his best interest. Consider also, that heroic archetypes exist whose major function is to cajole fate and the spirits into supporting their cause. So what is cheating but an example of these heroic traditions? By cheating you test your wits and skill against those who would catch you, and you manipulate the fates (or their dice-shaped representatives) to act in your favor.

Of course, we’re still playing a game, and that game has to actually function, so oddly enough, there have to be rules to support cheating. While it may not seem fair, there’s such a power imbalance and difficulty in proving a GM is cheating, that it’s probably best – even in a system where everyone is encouraged to cheat – that the GM remain mostly honest. Instead, scenarios should be designed on the harder side to take into account that the players will be cheating little bastards, and GM dice should be rolled in the open with no mercy or second chances. If they can’t beat the challenges while cheating their hearts out, they don’t deserve any mercy, just ridicule. Player cheating, on the other hand, is encouraged but needs to be challenging to pull off or both the cheating and the game are meaningless. Thus, someone needs to actively try to catch cheaters. Given that all the players are trying to cheat as much as they can get away with, it’s too much to ask the GM to both run the game and try to police them all, so some additional system has to be in place to catch cheating. Fortunately, one of the reasons we’re considering encouraging cheating in the first place is because it allows the players to test their wits against their peers. This means that cheating is meaningful only if you’re not caught, and that players have an incentive to catch one another. But, while we can assume that catching another player cheating may provide some incentive on it’s own, that incentive is at least partially at odds with a player’s motivation to beat a scenario and “win the game”, so players can’t be relied on to police each other out of the goodness of their heart. Instead, players who catch and rat out other players should be rewarded to encourage this behavior. This reward system might take the form of extra experience or bennies of some sort, or might even take the form of social stigma (a player caught cheating has to fetch drinks, wear the hubcap of shame, or address other players with titles until another player is caught), economic incentives (every time a player catches another, a dollar changes hands), or other benefits (the player who caught the most cheaters gets to pick the pizza toppings next time).

While on the surface, this seems like a pretty awful idea that will lead to broken friendships, if not broken noses, there are existing games that actively encourage cheating and don’t suffer for it (take Munchkin for example). The important thing is that all players agree to play this way and understand that the game is being played as much for the cheating metagame as for the game itself.

Some games definitely lend themselves more to this “play style” than others. Games with lots of crunchy rules, tons of tiny bonuses, lots of dice, and exception based rules have plenty of opportunities for cheaters, whereas simpler games do not. Serious games where players are trying to complete a plot arc or role play with one another will only be distracted and ruined by rampant cheating, while classic monster-killing dungeon crawls are a much better vehicle. One-shot games are probably the best way to play around with a novelty system like this. Encouraging cheating mid-stream in your 2-year running campaign is probably not a good idea.

So while the cheating metagame is not for all games, and not for all gamers, it promises fun, frantic, screw your neighbor action, creates less work for the GM than it would seem on the surface, and probably won’t require the police to come to your house… probably.

P.S. I’m at Gencon right now, so I won’t be able to reply to any comment until I get back. Feel free to discuss among yourselves though. I know this is a hot button, so I fully expect to come back to everyone telling me how wrong I am.

14 Responses to Encouraging Cheating at the Table