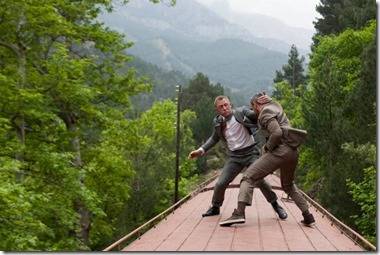 Your players have just spent hours crafting their perfect characters for your next long-form campaign. They’ve pored over the rules and splatbooks looking for just the right mix of classes and powers to get them what they want, they’ve picked all of the feats and skills for the next 12 levels, and they’ve written down pages and pages of backstory for their avatar in your game.

It comes time for the first session and you sit down at the table. “Ok, everyone describe their characters to each other.”Â  That was the situation for me a while back and I remember having this incredibly anti-climactic feeling as the players described in a short paragraph or two these incredible characters they had spent so much time on. Surely there has to be a better way?

Start With An Introductory Scene

Every character should get the chance to shine, and that chance should happen in front of the other players so that they get the full effect of who and what the character is. So how can you do that? With something that I’m calling an introductory scene. TV Tropes would call this an Avengers Assemble and that concept mostly fits. What I see an introductory scene as can be boiled down to the following:

1. The scene should start on a train with Jose sitting in a seat with his best suit on.
2. He should get a chance to pickpocket a secret document from someone in some amazing way, but then get discovered by one of the train guards or a conductor.
3. There should be an incredible chase where he gets on top of the train and is cornered by someone.
4.Â  He should escape in a way that makes the person think he jumped off, but in reality he drops into someone else’s private car without them noticing.
5.Â  It should end with him using his face change skill to change the way he looks and finding somebody beautiful in the private car, allowing him to seduce them as the scene fades.

What An Introductory Scene Will Get You

Starting your game this way has a lot of benefits for both players and Game Masters. You don’t have to start off with anything anti-climactic. Each player gets a turn in the spotlight with guaranteed successes. Each character gets shown off at their best. Everyone gets more and more excited as their turns come up. Everyone has a feel for the other characters, not just an idea of who they are supposed to be but an example of who they are in action. The first session avoids feeling like they all met in a tavern, even if the first group scene has them meeting in a tavern.

If you think back to the beginning of any James Bond movie ever, the goal of the first scene is to introduce this character. Not all of their details, but the quintessential, core points of who they are and what you can expect with the rest of the movie. Doing that for your game will give the players a sense of what they are in for and give them each a little taste of how awesome your game is going to be. So, what do you think? Have you ever started a game this way? How did it work? What would you write up for an introductory scene for any character you’ve played?