For the past few months, I have been wrestling with this small but annoying problem in the Hydro Hacker playbooks. It is a section of the playbook that defines your relationships with the other players. When I run this at conventions or in playtest groups, players always fill the section out incorrectly. Over several iterations of playbooks I have tried to refine this section so that it would be more intuitive, but it has not panned out.  Then in talking to one of the Developers (Senda), she gave me an idea that changed how I was looking at the problem – and with that, a better design appeared. Here’s what happened . . .

Nearly every Powered by the Apocalypse game has some kind of relationship mechanics, be it Hx in Apocalypse World, Bonds in Dungeon World, or Strings in Monsterhearts. I wanted something very similar for Hydro Hacker Operatives (H2O). In H2O, I created Neighbors. The idea is that in a group of friends, you can group your relationships into a few levels of intensity:

Each character has a number of spots in each of those categories so they can be Tight with a person, Cool with 2, Putting up with 1 and Neutral with everyone else.

There are more mechanics that surround this, including how to change those values in and out of play, and how you always return to a homeostasis between stories.

The important part to take away is that during character creation you have to put your fellow characters into those spots.

My initial approach to the user interface (UI) was focused on the Neighbors ranking: Tight, Cool, Neutral, Putting up with. I designed a simple table that looked like this . . . 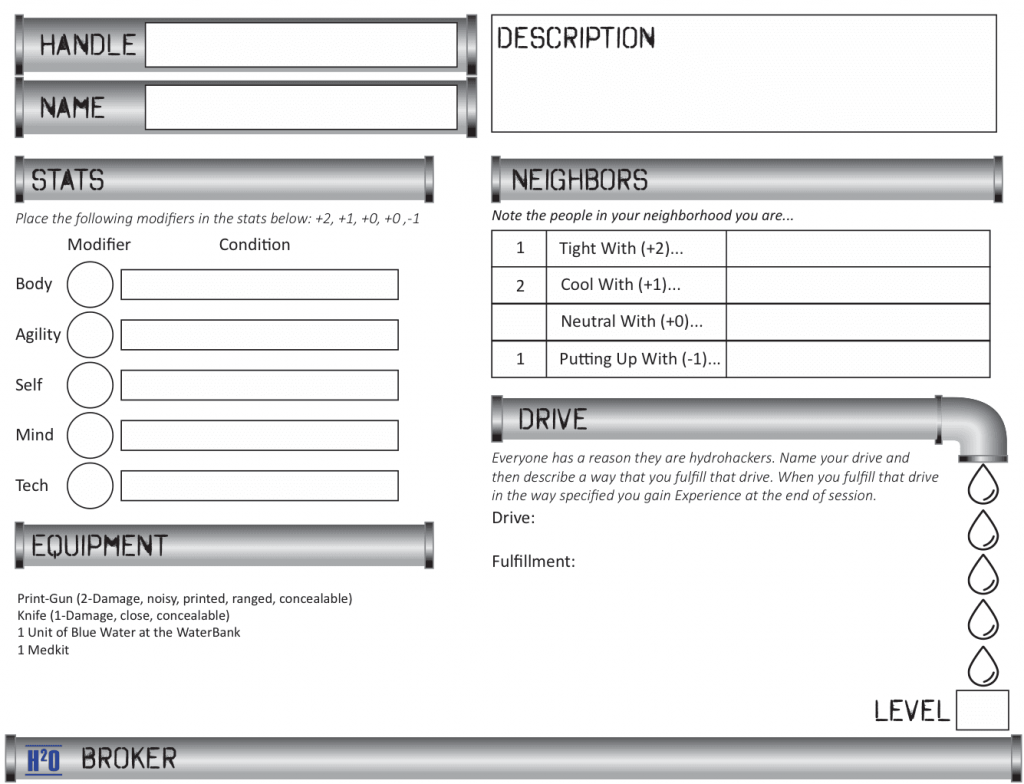 I was going to explain what the Neighbors grid meant, but I think that will defeat my point. Clearly there are some problems with this design, and for me it was super intuitive, but as it turns out there are reasons why we playtest . . .

What Went Wrong in Play

The trick in playtesting is not to jump at every potential problem someone brings up, but at the same time watch for trends. If you are explaining the same thing over and over . . . you have a problem. So the first few times I had people filling out the grid wrong, I noted it but waited.

Then I got some amazing advice from a fellow game designer, Jason Pitre. He told me that I should collect all the playbooks after the playtest and see how the players wrote on them – that it would identify problems. So the next playtest I ran, I did—and he was right.

What I saw was a lot of cross-outs and eraser marks on the page—clearly people were filling it out, then hearing me explain it, then fixing what they wrote. So it was a problem. I then tried to make some small fixes for clarity and came up with . . . 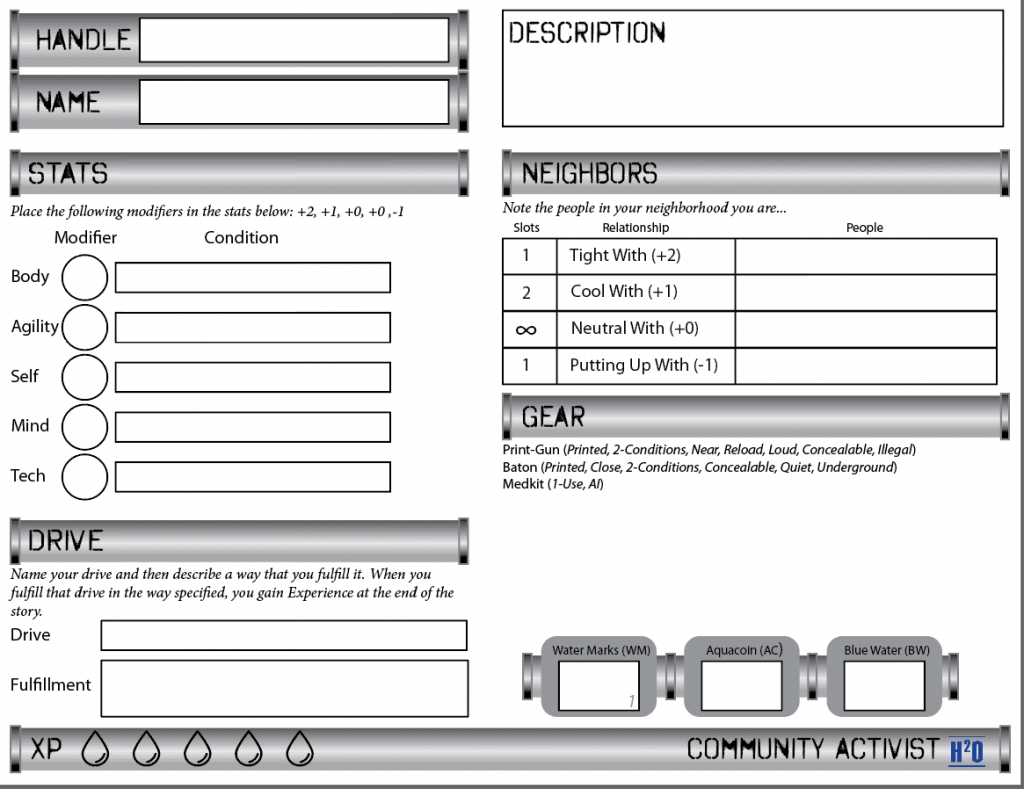 Here I tried to label the columns and note that you could have an infinite number people you were neutral with. I took it to playtesting, and it was better, but I still found people getting it wrong. This was not the right design, but I did not know what else to do.

I was doing a playtest/convention game at the QCC and we got to the Neighbors section. This time I was careful to explain (which is not what you want to have to do), and the players did something that had not happened before; In addition to their relationship slot, they decided to also create relationships between one another—two players were siblings, two were rivals, etc.

After that game, it dawned on me that there was another way that I could display this information and also give players a place to list their relationships. I could base the section on the Characters and not the Neighbor levels.

I went back to the drawing board, and this is what I have come up with . . . 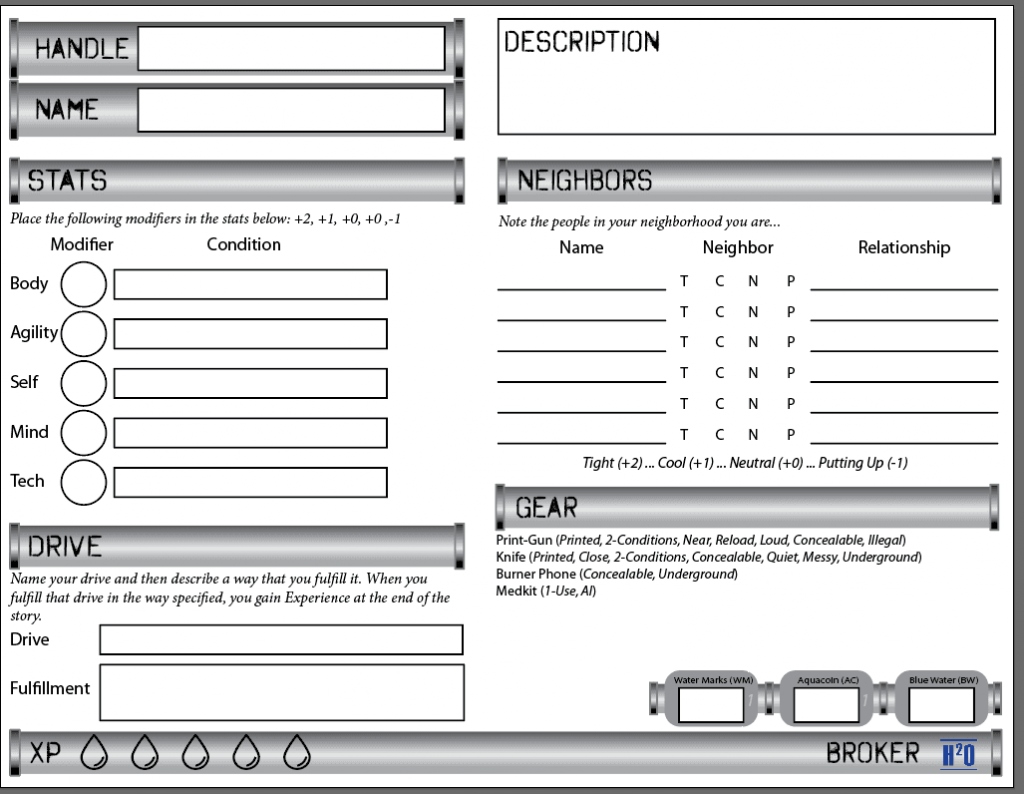 In this design, there is a line for each player in the game (in truth you likely won’t have six people in your game). Then you just circle the intensity, and now you have a place to define a relationship.

My hope for this is two-fold: One, it will make more sense how to assign the Neighbor levels; and two, it will encourage the group to create relationships between the characters which will further strengthen their connections in game.

I have started to show the design to my playtesters, and I will be trying it out at Metatopia to see how it works.

Have you ever encountered something on a character sheet that was not intuitive to fill out? How did you figure it out? Did you make your own sheets?