Often we think of playtesting for rooting out bad rules–things that are broken, don’t work, or are not clear. But sometimes in playtesting we find a perfectly good rule that by itself is excellent, but in the greater whole of the game does not work. Recently I found such a rule. One that I liked so much that its removal came with great hesitation. But sometimes a good rule has to be excised for the greater good of the game. Or, to put it as Spock said, “The needs of the many outweigh the needs of the few or the one.”

Last year, at Dreamation I ran a playtest of Hydro Hacker Operatives, and game designer Jason Pitre (@genesisoflegend) played in the game.

A bit of context–In H2O there is a mechanic for sweating. During some moves, you sweat, and in doing so you consume an internal resource of water, which in turn forces you to drink more water. As an aside, Drink Water is a move in the game that has some consequences because you have a bad reaction to any water you drink.

Jason suggested that there should be a way for a character to sweat to gain a +1 to their roll. In effect an internal Help mechanic that was keyed off of your hydration (that internal resource). I liked the idea instantly, and created:

When you push yourself harder to try to do better, Sweat (in addition to any Sweat the move required). You gain a +1 to your current roll. People can see you sweat. This can only be done once per roll.

In addition, the game already had a Help move, where your friends can provide assistance, Â which was based on your relationships with other characters. That move also granted a +1.

In general, when I run a game, I am a pretty easy GM, as in I don’t crush players when I play. Â If you are playing a one-shot run by me, it’s going to be challenging, but you are going to have a great time triumphing over me. One of the things I love about PbtA games, is that the players roll all the dice and the GM only acts when the dice direct, which is when the total result is six or less (we will get to that below), known as the GM Moves (also known as Hard and Soft moves).

Over a number of playtests, I noticed that I was not making a lot of moves during the game and that players were succeeding most of the time. At first, I chalked that up to my style, but then I remembered that the dice drive my moves, and I was making less GM moves in the game. Also, the game was supposed to have a gritty tone, and it felt that the tone was a bit off, with players succeeding so often.

The other thing I noticed is that the game is highly collaborative. Players are working together against an oppressive regime, so they often work together or in small groups. This means that they often make moves with their strong stats and not their weaker ones.

I needed to dig in and see what was going on.

For those that are not familiar with Powered by the Apocalypse games, here is a crash course. The crux of the mechanics are in a form of what is called a move, and a move has a basic structure like this:

When you want to do stuff, Roll + STAT.

On a 6- the GM will decide what you get.

Now stats range from -1 to +2, and the dice you roll are 2d6. We said before that Help or Sweating It Out both can add +1, and together would add a +2. So with all this knowledge you can go to Anydice.comÂ and figure out the distributions of the three different types of rolls: the 6-, 7-9, and the 10+. What we get is the following: 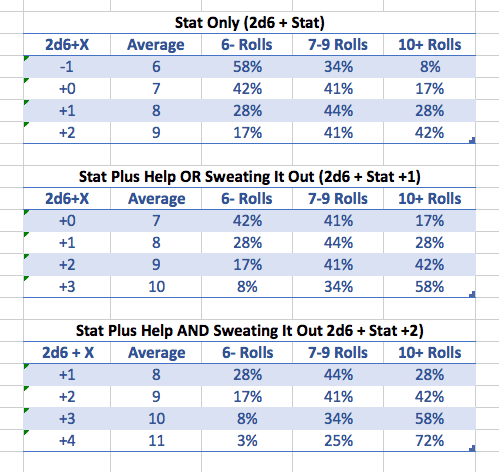 But in H2O it’s actually worse than that. Remember that players are working together, so they tend to make rolls that favor their strong stats (+1 and +2). So if we look at those distributions then without assistance they are getting a 6- between 17% and 28% of the time, with one form of assistance that goes to between 8% and 17%, and with both forms of assistance, it goes to between 3% and 8% of rolls. So the observation is right . . . players are failing a lot less, and GM’s get fewer moves.

So what was clear to me was that having two forms of assistance was problematic. In fact, as far as I know, no other PbtA game has two. Many have one form granting a +1. So H2O was going to need just one. The decision was which one would have to go.

Keeping Sweating It Out would tie strongly to the idea of sweating in the game, and it pushes the hydration resource and economy. Keeping Help sticks with what is normally done in PbtA games, but it also reinforces the idea of working together.

So the decision was clear, I needed to drop Sweating It Out from the Basic Moves (the moves that are accessible to all players).

I still like the Sweating It Out mechanic, and I could not totally let it go. So while it has been removed from the Basic Moves from the game I wanted to keep it somewhere, and that place is the Hacker. The Hacker was designed to be a bit of a loner. They have more difficult relationship mechanics, and due to the nature of how they work, they can be left alone in a cyber cafe working while the team is out in the field.

So the Hacker is going to get the move Sweating It Out as a playbook move, that they can unlock with an advancement.

We have talked before about killing our darlings, and this was definitely the case. Sometimes a good rule still can break things in the overall game. I also learned that it’s important to trust your instincts and then dig into the numeric mechanics when something goes wrong. Finally, a discarded rule does not mean that it is gone forever. Many times a rule can be found a new home, elsewhere in the game or even in another game. So now it’s time to update the Basic Moves and make some adjustments to the Hacker playbook. Until next time.

Special thanks to fellow Gnome, Matt Neagly, our resident Statistician who was kind enough to check my math, and provide me a few suggestions as I was putting this together. Thanks Matt.Â