D&D Burgoo: A Touch of Nostalgia

Being stuck inside on a winter’s afternoon, it seemed an opportune time to run an impromptu game of D&D for two of my children.

(Carolyn’s always in the mood for something fresh, so after weeks of train games and card games like Poo, Uno and Hike, she was willing to dive back into an rpg, while Jonathan was eager to use the new plaster dungeon terrain set he helped construct and paint).

Considering the buzz about 5E/DnDNext from the D&D Experience – that the first public play of the new rules harken back to the days when adventurers cut their teeth on module B2: Â The Keep on the Borderlands Â – I couldn’t help but feel nostalgic. 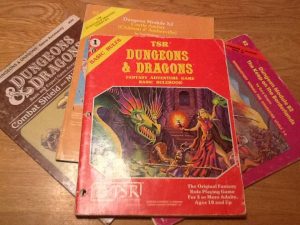 So I decided to dig out my two copies of the Basic Rules (Moldvay edition). It turned out to be an excellent choice to run for children, and it reminded me again of why I have such fondness for this version of the game.

Character creation is a snap

Does it get any easier than this? Roll 3d6 for six abilities, roll up hit points, and gear up by selecting from Ye Fast Pack in the back of Module B4: The Lost City? In about 10 minutes were were up and ready to roll, with Carolyn playing a magic user, Jonathan a thief and me running an NPC fighter.

My regular group loves the built-in complexity of Third Edition/Pathfinder skill selection and feats, and in previous sessions my kids have enjoyed the cool-sounding names (and effects) for 4E character powers.

Detailed character creation can be its own kind of fun. But we were interested in exploring a dungeon and rolling dice in some combat, not worrying about a host of modifiers for skills and combat.

On the fly adjustments

Not everything about the Moldvay edition is sunshine and roses. So I made some rules adjustments to keep the action going.

Giant toads are still a hoot

Fire beetles, vipers, and yes, even giant toads with 15-foot long sticky tongues and a taste for humans are still fun to run and to fight. Â And interestingly, because I gave the PCs a quest – item retrieval – they started to discuss the need to bypass some encounters because they discovered their resources were being depleted

(As kids, they weren’t using those terms, of course.) But they recognized that some monster fights weren’t paying off with clues to the treasure – only those against those foes they had been forewarned would be guardians. Hey, it’s always refreshing when a party puts XP aside for story, no matter what the age of the players happens to be.

Look, the old rules have their shortcomings, especially during campaign play, because the PCs aren’t being rewarded as they level up with a raft of additional powers and abilities like they do under more robust systems.

But for an afternoon of fun, or for those who prefer casual play or the beer’n’pretzel experience, you just can’t go wrong with the Basic set. But really, you didn’t need me to remind you of that. Tens of thousands of other players who’ve had their characters slain within the Caves of Chaos or survive a journey to Chateau d’ Amberville could tell you the same thing.

There’s adventure to be found around the next bend. Just mind the white roses and any nameless jovial priest whose acolytes have taken a vow of silence.

10 Responses to D&D Burgoo: A Touch of Nostalgia