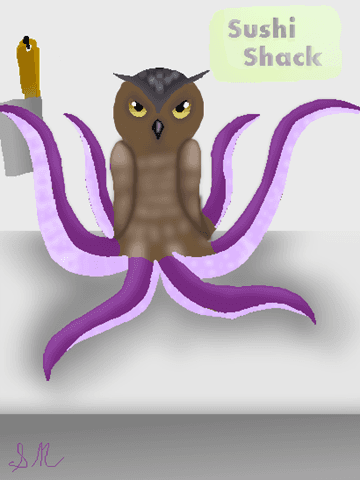 It’s time for another short adventure. This one has an old-school feel with a lazily named hybrid monster, the owlid (part owl, part squid). It’s a mix of combat and social encounters for your group and is also a classically styled shaggy-dog story, cementing it firmly in dadventure territory.

Background: A small village bordering heavy woodland holds an annual hunt to thin out the dangerous owlid population. This year the infestation is exceptionally bad so they have sent out the call for aid.

Owlid: Who knows where owlid come from? Probably a mad wizard. That’s always a safe bet. Owlid look primarily like large owls, standing approximately two feet tall. However, instead of an owl’s talons, owlid have a nest of tentacles. They breed quickly and are highly aggressive, hunting in packs, dive bombing prey and gripping with their tentacles while biting repeatedly. Packs of owlid are even unafraid to attack large creatures and men. Owlid tend to over-populate, hunt the local wildlife thin, eat up all the plant life and then starve en masse, only to repeat the cycle in a few years. Though a dangerous pest, owlid can be a food source, especially their tough but delicious tentacles.

Setup: The adventure starts when the PCs are asked to join in a hunt to thin the growing ranks of owlid, a dangerous local creature. There’s unlikely to be a lot of money in it, but there will be prestige and there are whispers that this year’s infestation may be due to the presence of a rare “Owlid Queen”, a worthy test of their mettle.

The Hunt Begins: Before the hunt begins, hunters gather at the town, sharing stories of past hunts and making boasts of their prowess and performance this year. This year some of the oldest hunters share their stories and trophies of an owlid queen, an owlid of prodigious size they hunted in their youth, claiming that this year’s infestation is proof a new queen stalks the forest. PCs should be encouraged to participate both at storytelling and boasting, may ask for advice from veterans as to the best places and ways to hunt owlid, and may even buy charms to bring success in the hunt.

Hunting: The next morning before dawn, the hunt begins. Hunters venture into the forest in groups to hunt owlid. The party may fight as many packs of owlid as they wish. When interest wanes, move on to:

A Deafening Screech: As the PCs finish off a pack of owlid or wander through the forest, they hear a deafening screech that could only be an owlid queen! Pursuing the monster is easy, but call for some rolls. On failure a few owlid will harass the party as they travel, slowing them down. With bad enough rolls, another group of hunters may get to the queen first (though to keep things simple any groups that get to the queen first are slain by the queen and her minions). Once the party catches up to the queen, she and her minions attack!

A Youth with Bravado: As the PCs make their way back to town, carcass of the queen in tow, they are stopped, still in the forest, by a young hunter. He insists that they give him the body and allow him to take credit for the kill. He is the best hunter in the village and insists that it is his right to have slain the owlid queen, a right the PCs stole from him.Â  If the party declines and the hunter feels they have been sufficiently weakened from fighting owlid he may attack them, though he will flee if he is badly injured. Otherwise he leaves. If they do give up the queen, he is still rude as he takes the corpse and leaves.

Hunters’ Feast: After the hunt, the town is a buzz of activity, preparing and preserving the bounty for the upcoming year. That night there is a large feast for all hunters, during which there is much drinking, storytelling and merriment. During this event one of several things may occur:

If the PCs are accused of murder or theft, they will be asked to immediately leave town. Otherwise once it is finished cooking, they are treated to as much of a local delicacy as they can eat. This delicious food is known as: owlamari.

Future Ideas: It’s possible that bits of the owlid queen, being a powerful magical beast, are useful to wizards, alchemists, or in the production of magic items. Owlid ink might be good for scrolls, feathers might be useful for cloaks that muffle sound. Preserved, the queen’s eye might make a crystal ball of sorts.

If the PCs were driven out of town, they’ve gained a minor enemy and a bit of infamy. If the young hunter was disgraced he may become a thorn in their side at a later time.

If the PCs were successful however, they may find the village calls for their aid again, or that others who hear about their deed ask them to complete similar tasks. In addition, ambitious up and coming owlid hunters may seek out the PCs for advice and training.

The “owlamari” groaner works just as well with cows with tentacles. From them you get “cowlamari” (also what you get when you carve up high ranking cthulhu cultists).