Cache Me If You Can!

This weekend I got the chance to try a new game, Cache Me If You Can, a board game about Geocaching created by DPH Games Inc. I went into this as a muggle, meaning I have never geocached before, but I do enjoy board games. There are no dice and everyone has the same base movement. Everyone starts the game as a type of geocache person: puzzler, gadgeteer, or barrower. Then everyone goes to the Geocaching Con and you get equipment cards and a geocaching coin. After the Geocaching Con section of the board players have the choice to go where ever they would like. There is a store section for getting equipment and event cards and there is the wilderness section to find the geocaches. Once you get going the turns become faster because everyone knows what they want to do for each turn. 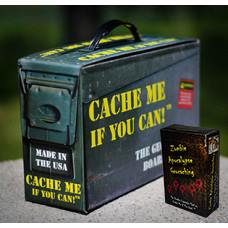 Cache Me If You Can with Zombie expansion.

I was able to try the Zombie Apocalypse expansion so we also had a zombie hunter in our group. A puzzler can solve the puzzle geocaches without equipment, a gadgeteer can solve night, nano, and water geocaches without equipment, a barrower can “barrow” equipment and forget to give it back, and a zombie hunter gets more points for killing zombies than the other players. The main point of the game is to be the person who gets the most geocaches with the most points. Adding in the zombies lets us get points by killing zombies and adds the possibility that our characters would be turned into zombies. But it’s ok to be turned into a zombie because as a zombie you are still geocaching and trying to turn everyone else into zombies. So it has the zombie theme without the “I died in the first 5 turns and now need to wait for my friends to finish before I can play again.” 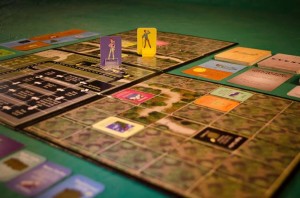 The board has so many ways it can be set up.

Hence to say I was the first turned into a zombie and was still able to take turns as normal, geocaching the whole way. I was also first to go shopping in the store so I would be able to get past more obstacles in the game. Some of the things you can buy are: boots for swamps, a metal detector for land mines, and a water bottle for the hot sun. Each card gives you a choice of item you want on the card and you put that half of the card face up in front of you. Later in the game it makes you wish you had more table space because some of the spaces you land on in the woods are equipment and that takes from the area in front of you, but it’s not as bad as some games I’ve tried. Cache Me If You Can is easy to set up at your kitchen table and play for an hour or two with friends. Early in our game many of the zombies were running over landmines and into fences so we were able to just get geocaches. Then came me turning into a zombie which two other players soon followed. The last human character alive was the zombie hunter. She was really close to getting her 18 points to win with her bicycle and baseball bat and gun, but then she was too late when the zombies started to swarm the town and caught up with her.

Overall it’s a really great game, and I’m not saying that just because I won either, all of us had fun. It has a solid game mechanic and you don’t have to be a geocacher to enjoy it. Also it has a lot of replayability because of the number of cards in the game. If you would like to try it DPH Games Inc will be at Running GAGG this weekend and RudiCon at RIT, Feb 14-16. If you see them there you can try Cache Me If You Can and their Zombie Apocalypse and Superhero expansions. Otherwise you can visit them in my hometown of Corning, NY. They also have a card game called Psychological Warfare which I’ll be trying at Running GAGG. 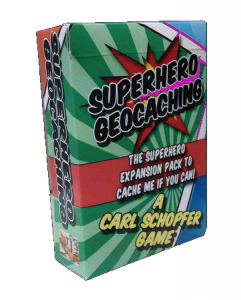 Will you be joining us at Running GAGG?