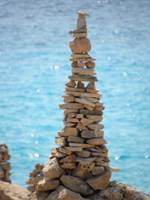 As I continue to use and love Obsidian Portal for game prep (Going Digital: Using Obsidian Portal to Prep for, Run, and Document a Campaign), it occurs to me that a basic wiki principle can be applied to non-wiki-based prep, too: Add it now, build it later.

The prep I’ve been focused on recently has been creating NPCs. I asked each of my players to include three NPCs they’d like to see in our Star Trek game in their character backgrounds (along with three things they’d like to see/do in the game, an idea stolen straight from the Stew’s own Don Mappin), and as they’ve sent me NPC requests I’ve created a page for each character in Obsidian Portal.

Usually, I create the page, pull an image for that character if they appeared in a Trek episode or movie, add a couple of tags (npc, starfleet, rival, etc.), and then move on. Later, when I have time, I come back and flesh out their background, motivations, and whatever else I need to turn them into fun NPCs.

The real benefit to this approach for me is threefold:

Were I not using Obsidian Portal, or not prepping digitally in another tool (a directory full of Word files, notetaking software, whatever), this approach would still be helping me out immensely. If I was using a notebook (like I did for my last game), I could add a page/section/tab/etc. for an NPC, and then come back as often as I liked to flesh them out.

This is really just an extension of a timeworn and effective principle of game prep: start small. But it’s the extension that I’m loving: “Start small, build in a modular way, and add material as time permits.”

Whether you use a wiki, a blog, a notebook, a stack of notecards, or just about any other means of organizing the game material you create in the course of your prep, combining immediate creation with delayed expansion of the things you create is a powerful tool.

Do you take a similar approach to your own game prep? Have you learned any tricks related to creating now and fleshing out later that other readers might be interested in?