A Trip Through RPG History With Designers And Dragons

I was not around for the beginnings of the game industry. I can look at the Red Box D&D set on my gaming shelves and know that I only have it because I acquired it from a friend who acquired it from an ex-girlfriend’s father. It sits next to my D&D Rules Cyclopedia, which I picked up a few years after first publication from a used book store. I was at the tender age of 12 or so and got it because it looked cool and I loved the Hobbit. I know of much of the gaming industry’s early days only through stories I hear online or talking with people at conventions. I was born too late to have been there for it. 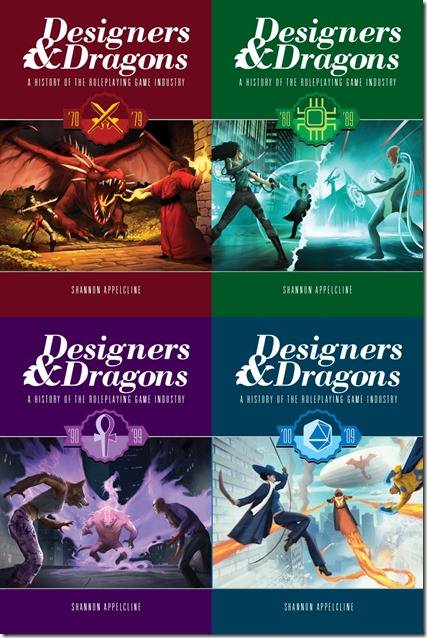 When I saw an email advertising a book called Designers and Dragons thatÂ purported to “dig deep into the lore of our forty-year-old hobby, uncovering the forgotten facts and hidden stories behind the biggest and most influential names in roleplaying games.”, well I was intrigued. I’ve watched a few forum threads and talked to some of my friends who have been around in the industry far longer than I, but those are snippets of the story. Designers and Dragons is about as close to a full history of the gaming industry as you can get. Within a few hours I had an order in for the set.

Designers and Dragons is a 4 volume reworking of the 2011 Designers and Dragons by Shannon Appelcline. The current version is produced by Evil Hat productions. Appelcline still heads the books and is credited as author on all four volumes. This in itself is impressive due to the sheer size of the work, but Appelcline didn’t do it alone. More on that later. Each book is over 400 pages (6 by 9) and the total of all four volumes is just under 1700 pages. The PDFs and books are in black and white, with the p 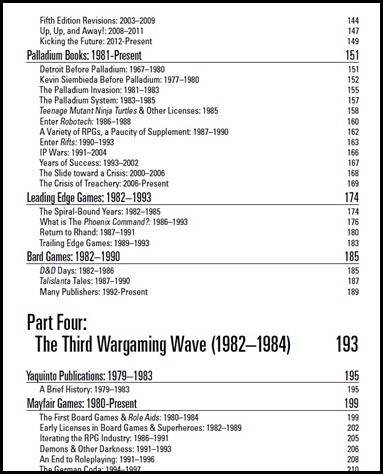 rinted edition I got from Drive Thru RPG being hardcover. The quality on the printed books is good and the layout is easy to read and move through. Art in the book is mostly informative iconography and scanned covers of books being talked about.

The primary focus of the series is on gaming companies and the stories that revolve around them. The book starts with a company in the decade it began, then follows it through its history, revealing the ups and downs, popularity, reasons it might have gone out of business (if it did), and where some of the designers and people behind the brand went. Nicely, if you begin reading the story of Palladium in the 80s edition, you don’t have to switch to the 90s and the 00s editions to continue the story. While there is a lot of spiderwebbing of stories between decades, you can get the majority of what happened to one company by reading its entry.

At the end of each entry is a nice What To Read Next section. If a story continues on in another section, such as a developer leaving to start their own company, then that is noted. If nothing particular leads on to the next section, then similar RPGs, companies, or gaming styles are noted. It makes reading kind of like a Choose Your Own Adventure book, but also makes reading sections and jumping about fairly easy. It is quite nice to pick up the book for a quick break. You can read a section, then jump around to another section, then set the book down for another 10 minutes of reading later. 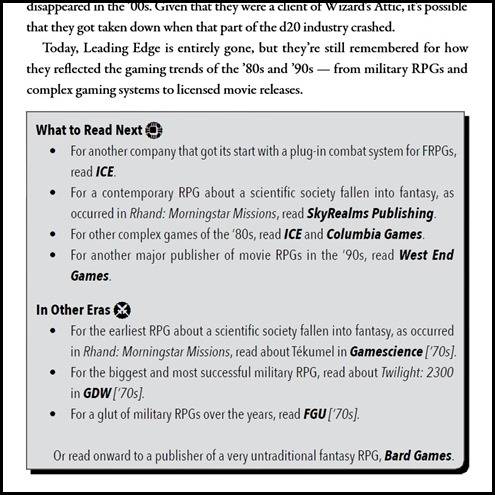 Thankfully, this book is not a gossip mill. When I’ve been reading through forums or talking with friends at conventions, gossip about

who or why a certain company collapsed often comes up. Designers and Dragons doesn’t avoid the hard stories or circumstances that lead to some company’s downfalls, but it doesn’t throw blame about either. Hard subjects are tackled, but in a respectful way. Controversies are revealed, but with very little opinion in the writing.

Another thing the book isn’t is overly dry. While every form of moderately academic writing or comprehensive fact based research is going to be a bit dry, the book is written in a very human way. This is a straight and easy to read history of gaming companies and how they affected the industry, and it covers the material in an easy to read style.

It is also not an overview of gaming in general, though it does touch on many of the trends and provides a decent idea of why certain trends occurred.Â  By reading through a volume, a reader will have an idea of what was happening in gaming at the time, but there is no attempt to delve directly or in-depth into the whats and whys of certain trends. Trends in the gaming industry will be mentioned in relation to the companies within the industry, but the book doesn’t divert from its primary mission of showing the industry through the producers of content. That in itself is a positive point for the books as well. There is no speculation as to what gamers were thinking or why they didn’t find certain products popular, except in relation to how that affected a company. Designers and Dragons presents the facts as best as could be complied and lets you put the picture together from there. By having the pieces accessible, the reader can put together the bigger picture without any research bias.

How Comprehensive Is It?

As I read through sections, especially as I got to the most recent entries, I began to wonder how thorough it would be and what would qualify a company for entry into the volumes. As the means of production became more available to the public, through printing houses like lulu and selling marketplaces like Drive Thru RPG, the number of people producing role playing game related materials exploded. Needless to say, covering every single role playing game company or producer would be a task that left one with no time whatsoever. Designers and Dragons focuses on the most notable entities. Though each book is massive at 400 pages, to do otherwise would balloon each volume up to a gigantic size. Instead, the companies and trendsetters that are most notable are covered in as complete a way as possible. Part Six: The Indie Revolution (2003—2006) of the 00s talks about many of the prime movers of the Indie Revolution and touches briefly on the trends that allowed them to flourish, but could in no way cover the hundreds of publishers out there pushing products under the “indie” label. It does, however, provide a good overview of the moving forces and biggest names that would be considered indie by most gamers

How Accurate Is It?

Though Appelcline is at the head and credited as the author on the entire work, there are many people credited with creating this massive volume. Indexers, editors, project managers, etc. In addition, the appendix has a brief bibliography of books, magazines, and websites that the information was gathered from. While print books like The Fantasy Role-Playing Gamer’s Bible and Heroic Worlds: A History and Guide to Role-Playing Games are referenced, the Bibliography states that:

This book was built from thousands of primary sources including interviews, design notes, reviews, news articles, press releases, catalogs, forum postings, and other non-fiction articles. It was also built with the assistance of hundreds of readers, fact-checkers, and scanners.

Paging through the four volumes, you can tell that a lot of information was collected from a lot of sources and compiled here.Â  My partner going through her PHD program has exposed me to the rigor of academic writing and the errors that would be unacceptable there. This isn’t academic writing, but it is a researched history pulled from multiple sources and a lot of stories. Wondering how much error might have slipped in, I was glad to find that there was a decent fact checking process at work in the creation of the books.

Whenever I finished an article, I tried to get one or more people associated with the company in question to comment on it. In one or two cases where I didn’t have sufficient company feedback, I got some help from fans as well. These peopleÂ  helped to make this book considerably more accurate and informative thanks to both corrections and insight generously given. Some were kind enough to comment on multiple editions of these articles over the years. A few of these folks just answered questions for me. Errors remaining are, of course, my own.

Designers And Dragons is research, pure and simple. Its accuracy comes from the dedication that the author and the team behind him put into fact checking and ensuring their information was correct. I’ve yet to see a more complete, easy to read, or well researched compiled source of information about the role-playing game industry.

The physical books are hardbound and are 6 by 9. They are nice coffee table books and look great on the shelves. They are good books to pull out and read small sections of, and definitely not books to go straight through in one go. The PDF copies are nice to pull up on my tablet and browse through when I’m bored. I find myself constantly jumping between books to follow down different paths or the life of a particular designer, or follow a path suggested by the What To Read Next section. I could make do with just the PDF versions, but I’m glad I ordered the hardcovers. A spare bookmark is constantly moving between the four books as I pick it up for quick reads and quest between the volumes.

Why I Bought It & Why You Should Buy It

This is a great book to fill in many gaps in my knowledge of the gaming industry. I’m horrible at staying constant on forums, and the only other way to get all this information would be to go through the monumental task that Appelcline, the editors, and the fact checkers went through to compile it all together. This is a great resource to collect and archive a history of role-playing game companies and the trends that shaped them. For me, it is going to serve as a great way to fill in gaps in the stories I know only a little about and provide me information I never even knew to look for.