A Master Class on Dungeon Design

If you don’t follow him regularly, you might not have noticed that Chris Chinn is on fire these days. He’s long been writing great articles to help you diagnose your group and provide awesome tools, like the Same Page tool, or the super quick one sentence character motivator.

Some of the more interesting ideas for 4th edition plots and stories came from his site, including The Five Blades of Bahamut— a game I’d still happily play. 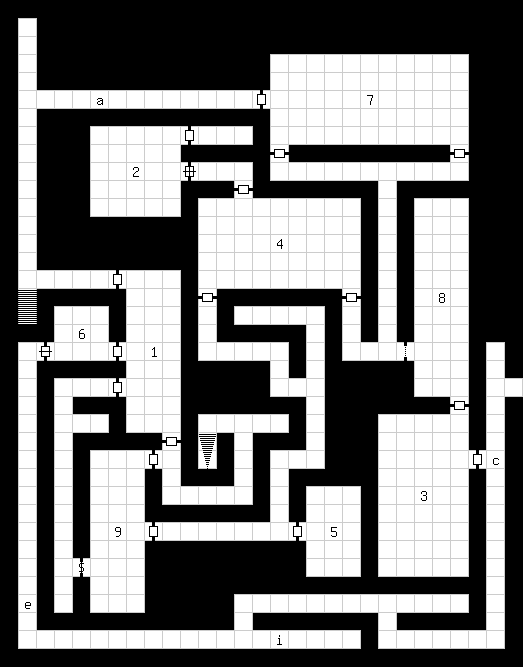 Now that Fifth Edition is out, he’s got a great seven part [so far] series on dungeon design. Even better–the advice is applicable to dungeon crawls in most formats–you could use the same advice to improve your Pathfinder or OSR games just as easily.

What’s in the Series?

From the very beginning, he notes that his analysis springs from the last ten years of gaming discussion–including video game level design discussion and theory. In part one, he steps back and talks about the advantages of a dungeon adventure versus sandbox, plot driven, mystery, or even his classic adventure, Well of Souls.

One of the most important bits that he identifies in part one is the expectation mismatch that players can bring to a dungeon crawl.

To put it roughly, these three elements give players fun in three different categories — Exploration, Logistics, and Tactics, though they don’t map exactly one to one. For example, traps rely on information scarcity, but usually the part players have fun with traps is figuring out how to outwit them, bypass the trap, or use it to their advantage — Logistics.

I know that I’ve been frustrated by item tracking games (boring paperwork!), while not tracking resources often rubs Jennifer wrong, as cheating. It’s one of many “aha” moments I got reading the series.

Continuing on, he discusses the advantages of various physical layouts of the dungeon’s rooms, including the use of one-way forces (like falling down a slide), when a shortcut might work for you, and so on. All in all, the first post sets the table for the following posts, though it’s a bit more abstract than much of what follows.

Part Two turns the focus away from the page and your quiet prep to considering your group. I’ve learned what happens when you assume instead of listening to your players. There’s good advice reminding you about what people could be looking for along various axes. Like… is combat something characters are trying to avoid, the fun part of the game and always a “fair” fight, or something else? Looking through his list of elements (including fighting, threat, logistics, and a handful more) reminded me of how broad roleplaying experience is–and how many different positions I’ve had on the issues at different times and depending on the game and group.

They’re all well worth reading. In part three we start planning the dungeon–not at the level of drawing our map or picking specific monsters, but making the big choices so the dungeon coheres. Part 4, Threat Structure details ways that dungeon design ties into the experience of exploring it; a dungeon filled with an organized society feels very different from isolated caverns filled with strangely unrelated creatures.

Information Management does an excellent job of identifying exactly how you write down encounters for maximum utility at the table. At the end of the post is a sample room, if you just want to steal the format whole cloth. (One awesome thing I’d never considered: a section called Breakables. Great stuff for making misses more colorful, and keeping track of the way that players have altered the room–so their changes persist when they return.)

Monsters, Hazards and Stunting talks about building areas and specific rooms so they’re exciting. For example:

It’s also about how the threat structure from part three telegraphs through–fights with formations of hobgoblins that report swiftly to alarms demands different maps and fight types than isolated monsters, each in their own room.

Part seven, Flow and Area Design, takes the decisions you made in part three and turns them into specific encounters and environments. So far, that’s the series… but I’m looking forward to whatever comes next!

I’ve been making and running dungeons for many, many years–and yet, Chris’s presentation made me think about dungeons in a new way. The specific tips for writing up your notes, presenting the breadth of experiences that we can look for when we decide to venture into a dungeon, tying area/map design back into the creatures and type of exploration, are all going to have an impact on my next dungeon. And the one after that.

And now for something a little different

I’m not driving anywhere near as much as I used to, but I’m still enjoying a podcast called the Mighty Meepcast quite a bit these days. It’s about gaming generally, with an emphasis on board games… but roleplaying and electronic games often get a mention.

If you want to hang around a table and talk about gaming, this podcast captures the experience.

What are you reading and listening to lately?