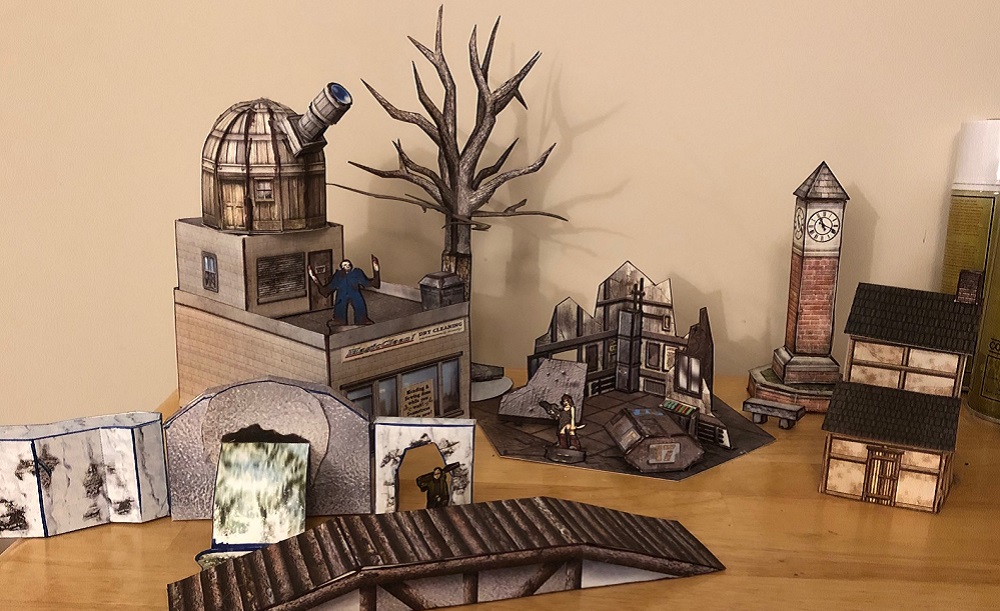 If you’re just here for the links, here they are. These are all available through DriveThruRPG because I’m lazy, and it’s really easy to find free models on there. If you click on any of these products, you’ll also see a bunch of free “customers who bought this title also purchased” options at the bottom, so…go nuts, I guess.

If you’re still reading, I can only assume it’s because you want advice, anecdotes, and the ability to laugh at my poor life choices.

I included the time I took to build all these so you have a rough idea of how complex each build is. Two things about that. One, these are all rush jobs. Taking longer than I did will end with better-looking results. Two: I’ve spent the last couple of weeks in kind of a papercraft haze, so I’ve gotten pretty fast at putting these together–at first, you’re going to want to budget probably 150% of the time I took at minimum.

Materials: Five Things you Probably Want and One Thing You Definitely Don’t

Let’s start with talking about materials, in descending order of “you’re gonna want this.” On the upside, with the exception of the printer/toner itself, these materials are all fairly cheap, and thanks to our commercial obsession with maintaining productivity as a huge chunk of the workforce starts working in their PJs from the living room, are easily available through your ordering website of choice. Be nice to your delivery person.

Start with this one.Â The scale is a little small for most miniatures, but this only requires one sheet of cardstock and goesÂ fast. This will help you get the basics down, and later projects will go much faster once you have a solid, tactile grasp of how the glue, folding and scoring work together. Give yourself time to get it right–the more of these you do the faster it will go. Because it’s all on one sheet, scaling it up will probably be harder than is really justified, but hey: it’s free. And it’s quick, and it teaches you the basics. 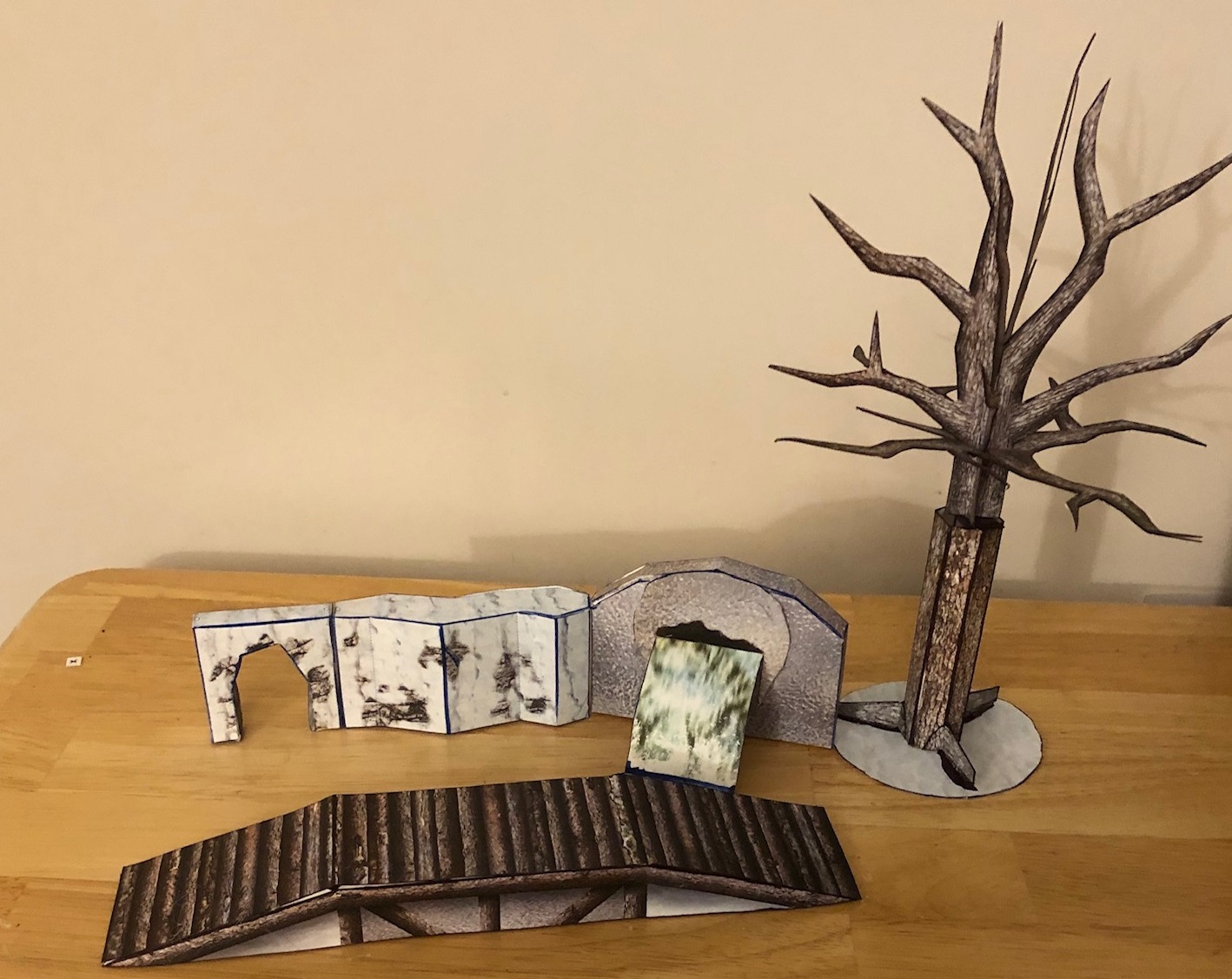 This used to be a paid set of patterns, and it shows: there is aÂ lotÂ here. I didn’t even try to make everything, because there was so much, but I really like Fat Dragon Games papercraft buildings, so I thought I’d try some of their more natural stuff. Ultimately, papercraft isÂ neverÂ going to be great at imitating natural lines, but this set does an admirable job of trying to overcome those limitations. You’ll probably want to turn off the ice layer on the pdf for most of these, since it just kind of looks like an undifferentiated mass of blue with the ice layer on. 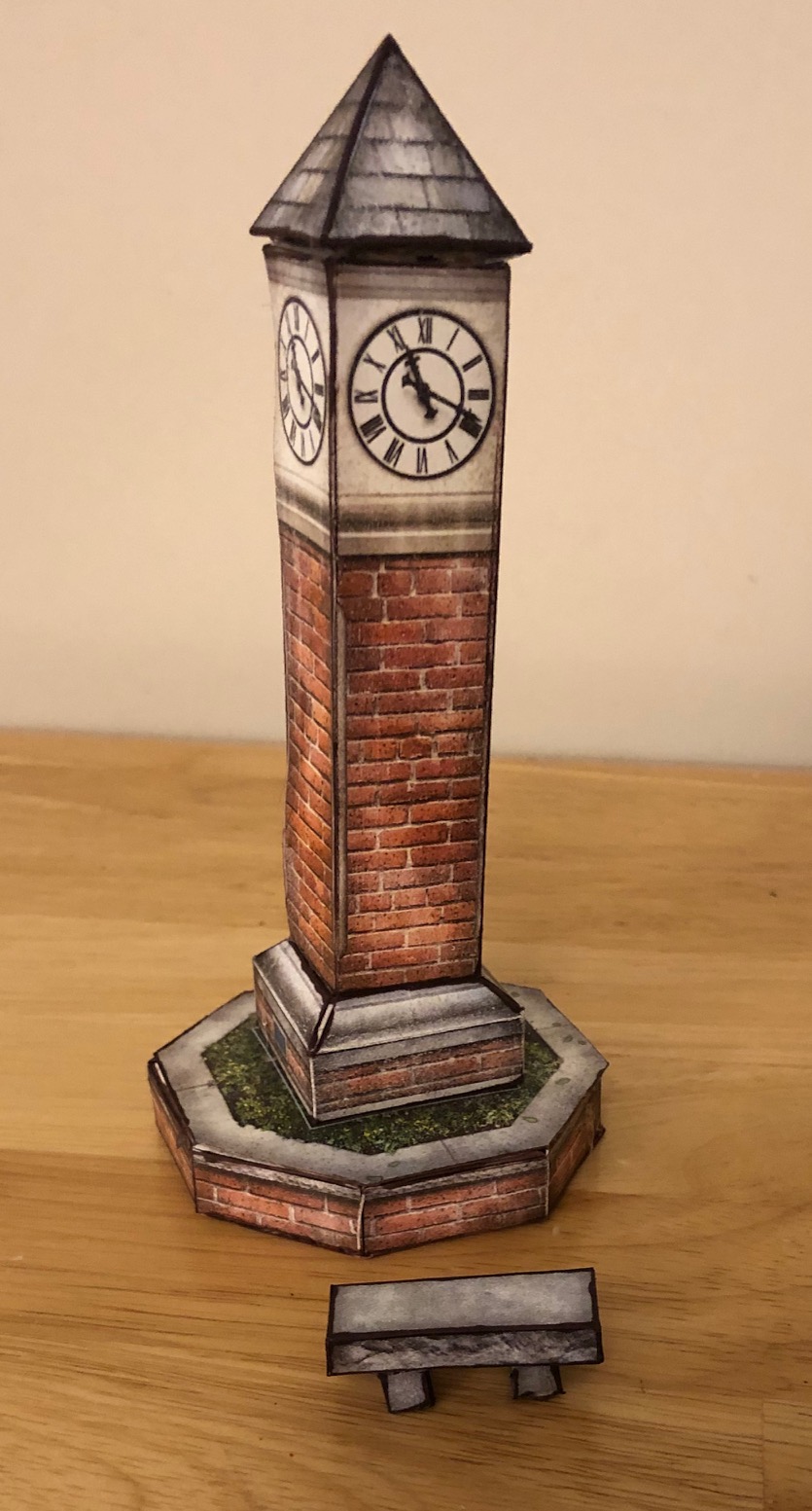 For this one, the clock itself took about half an hour, and the stone bench took another fifteen minutes. This set comes with multiple benches per sheet though, so if you like them, you might want to make more. It also comes with a “monument pillar,” which is to say exactly the same thing as the clock tower, just without the clock face. The clock tower might be the best combination of “cool” and “quick” in this article. 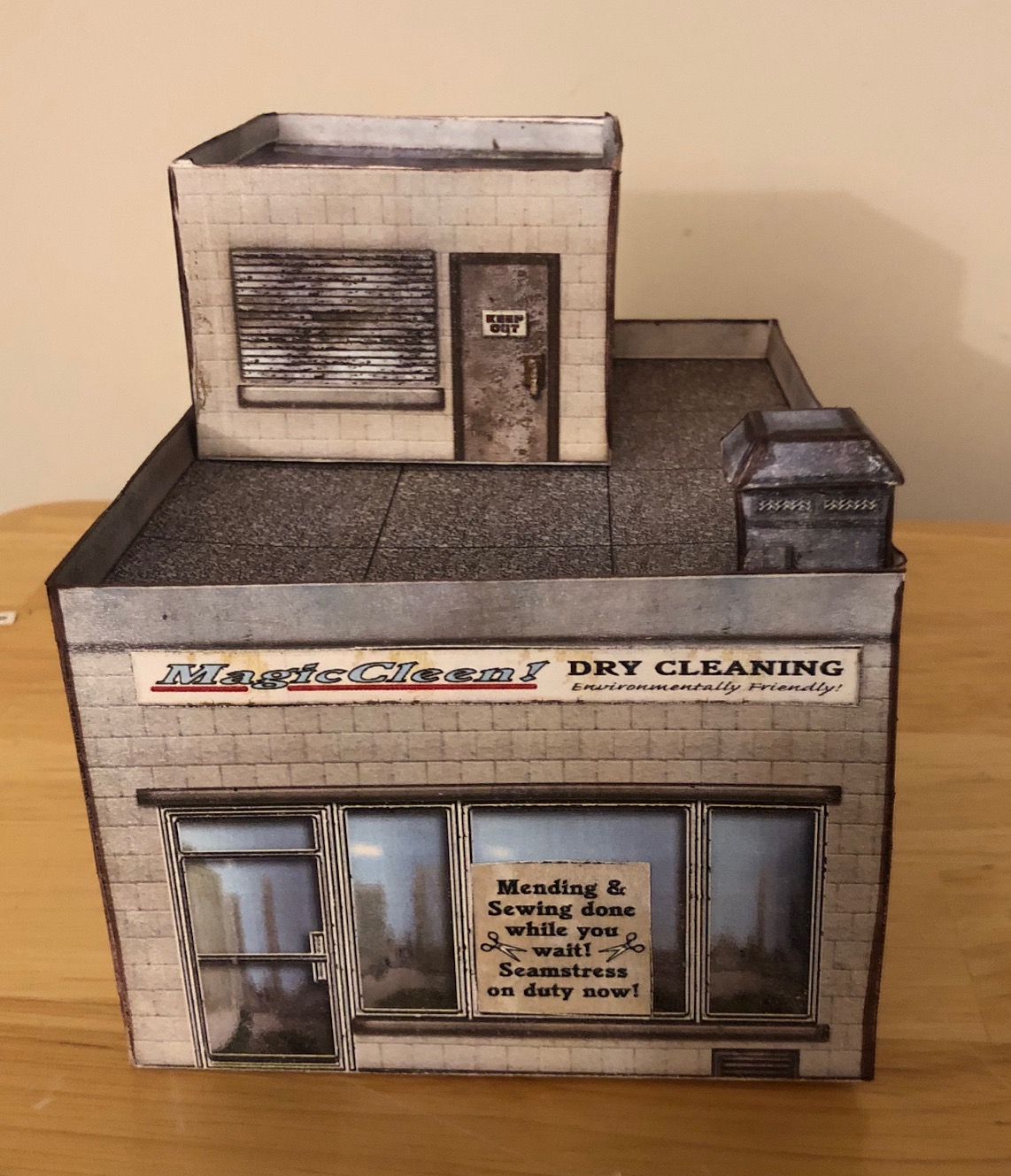 I’m not going to complain too much about a free model, but it’s rarely a good sign when the instructions include disclaimers about tolerances in printers being different and how that might result in things not fitting properly. Don’t start with this one, because you’ll need to score in different places than it has marked to make it all fit together right–having experience with other models will help you do this. To watch this in action, feel free to check out this time lapse video of me fumbling with the build. This is also “heroic” scaled (1.5 inch squares, rather than 1 inch), so you might want to print it at 66%, but other than the squares, it actually looks about right scaled as is.

With all that ungrateful moaning out of the way, thisÂ isÂ free. And it’s a great little modern building when it’s all done. IÂ doÂ strongly recommend this one if you do anything modern at all (or if you’re playing a post-apocalyptic game and want to throw in something that shows how things “used to be”). 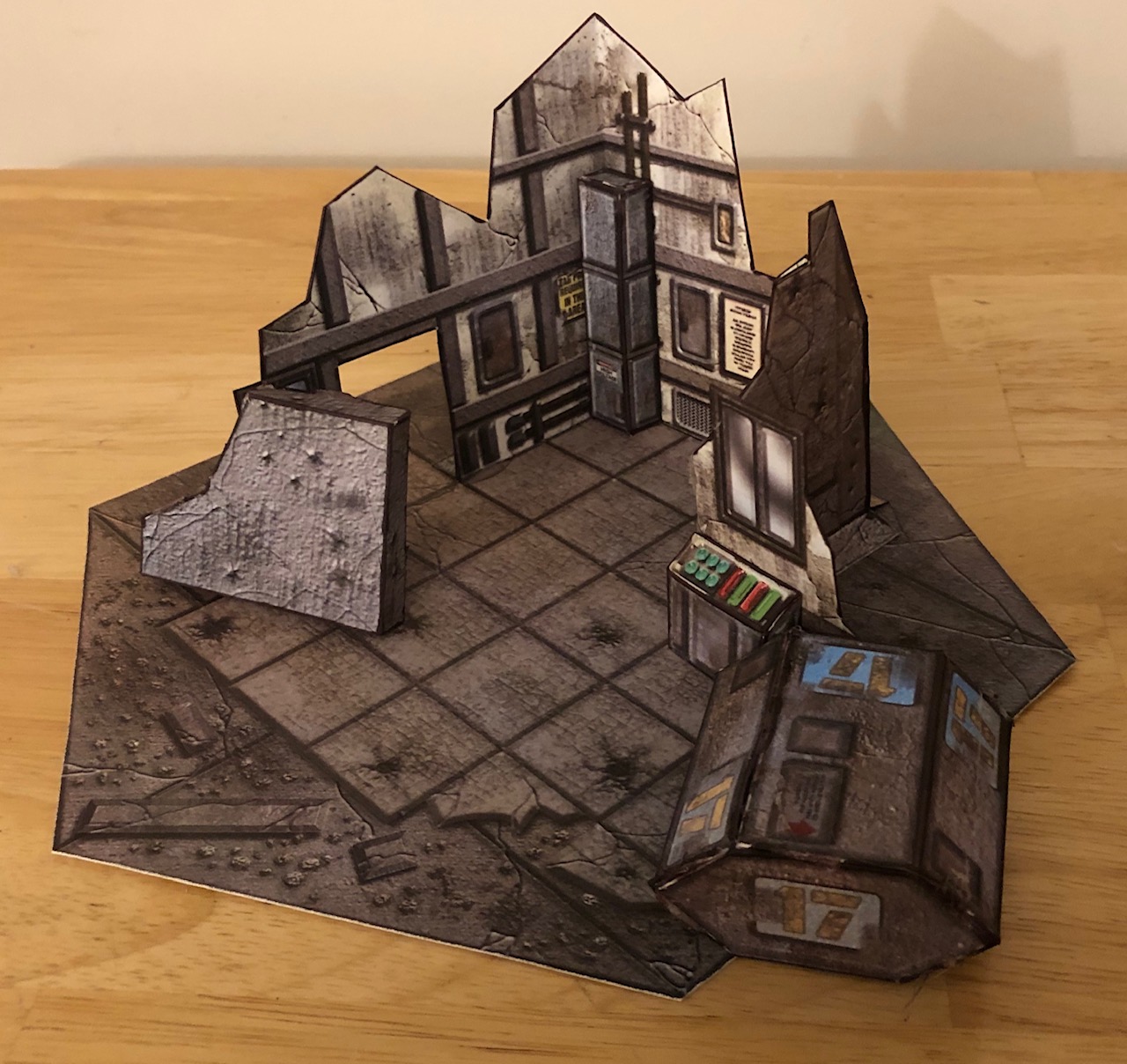 While the walls on this one are very visually flat, it’s sturdy and tactically interesting, with a bunch of additional pieces to make the walls “pop” a little bit more. If you find yourself playing modern or post-apocalyptic games a lot, this piece is bound to see some use. This set also included a sort of retro-looking Van De Graaff generator thing, which I built, but ultimately threw away because it took up a lot of space without actually adding much. If I had it to do over again, I just wouldn’t build it. It also includes miniatures for some small tank-like things that I also didn’t use, but you might get some mileage out of. 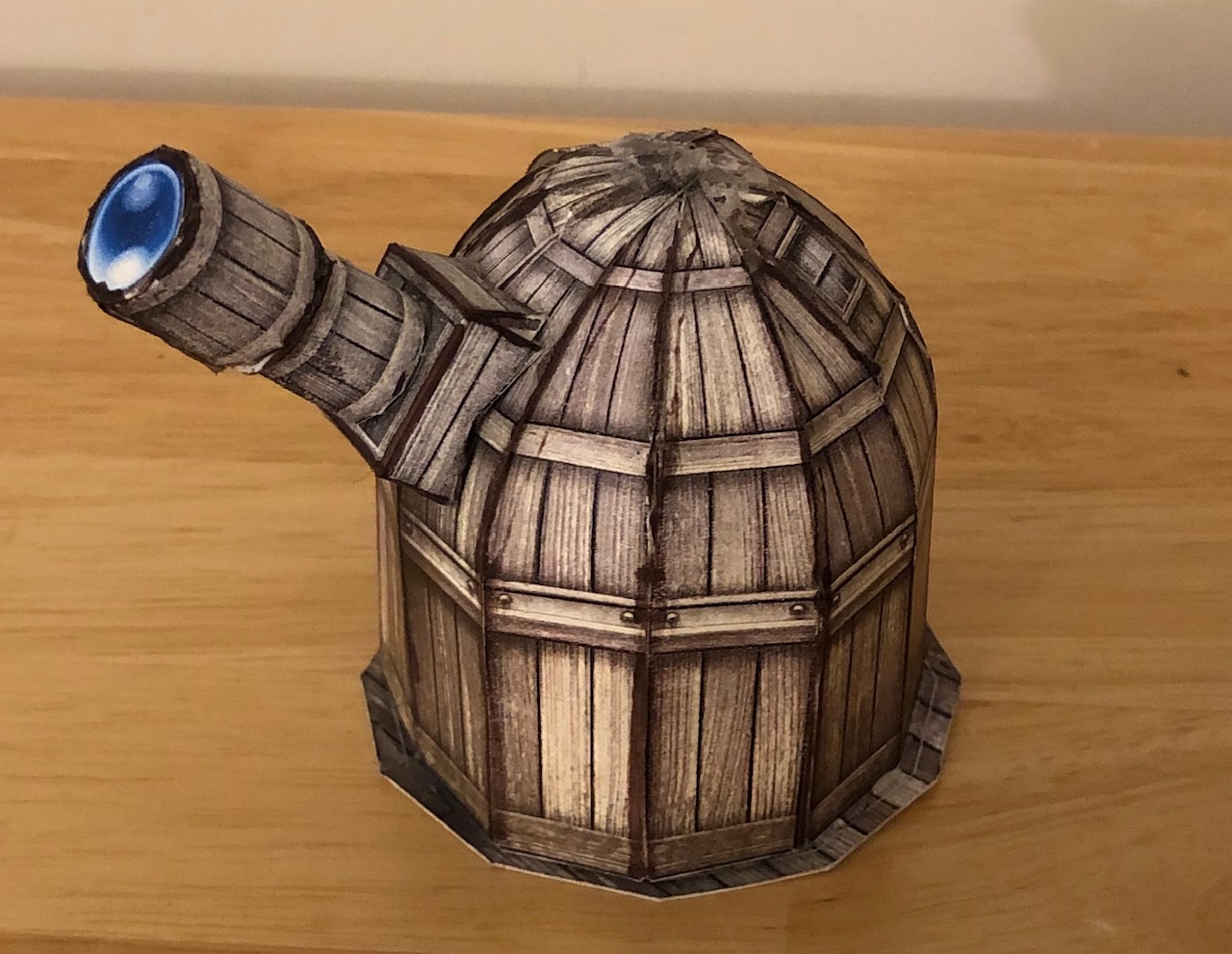 Remember how I said aaaaaaaall the way at the beginning of the article that these were all rush jobs? Nowhere is it clearer than with this one. Doing it right and well would probably have taken twice as much time, but I got impatient and just hot glued the top pieces together. It was faster that way, but it definitely shows.

As far as cool pieces are concerned, this one isÂ awesomeÂ if you have the patience for it. The set comes with three different materials for the observatory to be built out of, and each one only takes a single sheet of card stock. The combination of minimal materials required and end result (even when it’s rushed) makes this one a great addition to any fantasy or steampunk table.

I originally wasn’t going to do any paper miniatures, but then I realized that I wanted to show the scale of some of these buildings without breaking the theme of free papercrafts. There are a lot of free papercraft minis out there–these just happen to be my favorite. Quality varies wildly, so don’t blindly print out everything that you see. The big advantage of papercraft miniatures like these are that you can build out a whole army of them pretty quickly and cheaply.

So that’s it: seven sets of free papercraft miniatures you can start building right now. Did I miss any free papercrafts that are your go-to? And if you end up making any of these for your home game, let me know in the comments! I’d love to see your work!

1 Response to 7+ Fast, Free Papercrafts to Surprise Your Players