6 Tips for GMing a Large Group 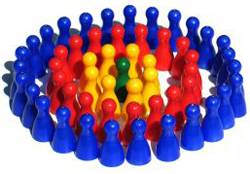 Somehow, you find yourself about to run a game for waaaay too many players. Maybe you’re just a softy, and can’t say no when too many people are interested in your game — or maybe you’ve never tried GMing for a large group before, and you just want to give it a shot.

Whatever the reason, chances are you’ve got at least a few worries about how things will go (I know I did!). Don’t sweat it — here are 6 steps you can take to make things go smoothly with a large group.

What’s a “large” group, though?

Most GMs I’ve known consider 7+ players a large group, although it all depends on what you’re used to. The bottom line is that if the group is bigger than you’re accustomed to, it counts as a large group for you.

These tips are based on my two experiences running an RPG for a bigger group. The first time, it went very badly; the second time, it went pretty well — largely because I figured these things out as I went! Hopefully you can benefit from my mistakes (a topic that’s come up here before, in Martin’s Maxims for GMs and Write Your Own Naughty List).

It’s also worth noting that my large-group experience is all with D&D. Some other RPGs handle large groups more easily than D&D does, but these tips should still translate over pretty well.

6 Tips for GMing a Large Group

Sound good? Let’s get into the details!

1. Ask for help from your players

With most RPGs, as the GM you’re already doing most of the heavy lifting — coming up with adventures, drawing maps, arranging things, keeping everyone on track, etc. Some of those things won’t take you any longer with a bigger group (a map’s a map, whether it’s for 4 players or 10), but others will.

With more people to manage, you’ll have less time for things like taking notes during the game, keeping track of which items were found where and other side tasks. Some players enjoy doing these things (I rarely have trouble finding a quartermaster for D&D campaigns, for example), while others might be interested in helping out in exchange for in-game rewards — like bonus XP.

Some players don’t like doing anything but playing their characters, which is just fine — don’t take it personally if not everyone leaps at the chance to take on a side task!

2. Plan ahead — even more than usual

If you have to take 15 minutes to draw up a map during the game, a larger group is likely to get distracted (or bored) more quickly than a small one. Spend a little more time on prep than you would with a smaller group of players, and your sessions will go more smoothly.

And if you can’t avoid stopping the game to tackle something, call a short break and let everyone stretch their legs and get snacks. When they sit back down, you’ll be ready to rumble.

Splitting the party always slows down the game, but with a larger group there are more people left out of the action — and as with tip #2, more people get bored/distracted more easily. You can’t always avoid splitting up the PCs, but try to come up with a different solution as often as possible.

Sometimes the best way to accomplish this is with an informal social contract, which you can cover before the game. For example: The players agree to avoid splitting up the party (even if it would be more logical to do so), and you agree not to include adventure situations that require them to split up.

In a lot of games, larger groups = longer battles. D&D 3.x is a perfect example: Even with streamlining, I’ve had D&D combats with a group of 6 take 3+ hours. Things you can do to cut down on this time include:

5. Handle some things outside the game

Some activities always seem to take a long time, no matter what you try to do to speed them up (item management in D&D, I’m looking at you). Levelling up, spending skill points, sorting out treasure — these are all things that can be done before or after each session, over email, on your Yahoo! group, etc.

With a large group, some problems are magnified — for example, the downsides to having the PCs map dungeons as they go. I don’t like this approach even with a smaller group, but with more people involved you wind up wasting a lot of time when a) the map isn’t accurate, or b) you have to re-describe rooms.

The solution is to take a few shortcuts — and you might need to run a session or two to identify areas where shortcuts can be taken. Here are a few examples:

Over in the GMing Q&A Forum, the thread What are your top three organizational tips for GMs? includes some great timesavers that can be applied to large-group games (as well as a host of other tricks for getting — and staying — organized as a GM).

If you’re brand new to GMing, you might want to take a peek at another thread in the forum: What is a good group size? It’s full of good ideas about how find your ideal group size, and addresses some other concerns related to large groups.

Have you run a game (or games) with a larger group? If so, how did it go? What things did you do to speed things up that aren’t covered by these 6 tips?

16 Responses to 6 Tips for GMing a Large Group