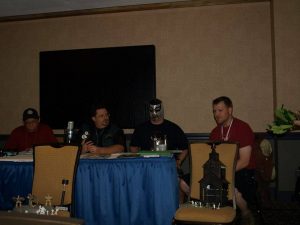 Yes. Kurt is wearing a mask.

Every year at this time I write my Gen Con recap, which is often a list of things I saw, people I met, and games I played. This year I am going to save that for G+. Instead, I want to sum up some GMing topics which came up in the various seminars I attended. After all this is a GMing blog, an Award Winning GMing blog at that, so lets stick to GMing.

One of the things I love at Gen Con is the chance to interact with other Game Masters. This year I participated in three separate GMing seminars:

This year a few common themes emerged, and while I and my other seminar hosts answered them at Gen Con, I thought I would share these themes and our solutions. For sake of article length, I have boiled these topics into very high-level issues and provided only the most basic solutions. Any of these topics is worthy of its own article. With that in mind, here are the most common themes.

A very common, and sadly too common, theme that I heard about was issues with the group dynamic. Often this was in the form of a player who was not fitting in with the group, or a difference in opinions between the players and the GM, or with groups of players. A common issue discussed was the Leroy Jenkins player, or what I call Chaotic Stupid.

The root cause for this is almost always a mismatched set of expectations about what the game is, the story that is being told, or the expected role/behavior of the participants. The solution to this problem is communication; sitting the group down and having a candid discussion about the expectations of the game. In most cases that discussion will lead to a new consensus among the group and the problem is solved. In more extreme cases the differences cannot be resolved, and someone may need to leave the group.

Another question which came up in two panels was about rules mastery, especially with regards to players. The main issue was that the players have developed such a heightened level of rules mastery that they have exceeded the GM’s skill. In some cases the players are making it hard for the GM to create challenging adventures, because of their ability to dominate in combat. In other cases the GM is being criticized by the players because they do not fully understand the rules.

It can be hard for a GM to gain the same level of rules mastery as the players. After all, the players are managing a single character and mastering the rules that surround their character. The GM on the other hand is managing a campaign (players, characters, story, and setting) as well as prepping for sessions. In most cases, especially among older GM’s, its hard to reach a broad level of mastery compared to the more myopic mastery a player needs to reach for their character.

That is not to say that a GM should not know the rules for the game they are running – quite the opposite. The GM should dedicate time every few months to study of the rules. In my long-running Iron Heroes campaign, I took time each year to re-read the core rules, to refresh my knowledge. A GM can also help themselves through prep, to study up on rules relevant to the up coming session, as well as copying and pasting important and obscure rules into their prep. Finally, a GM should never be afraid to make a table ruling to keep the game running, and then go back and review the rules outside of the session.

Knowing When Your Campaign Is Done

I met one fortunate woman who had been one of the rotating GM’s for a four-year long campaign, who discussed that she was burning out because it was getting harder and harder to write original material for her campaign. Our solution? End your campaign.

A four-year campaign is a great achievement, and rather than letting the game go out with a fizzle, end it while it is strong and the players have fond memories playing it. One way to end a campaign that Walt discussed in Odyssey is the managed ending – bringing your plot lines to a neat conclusion over the course of a few sessions. Another suggestion, by Chris Sniezak, was to suspend the game like the ending of a TV season, and switch games. After a season of another game, consider bringing back the first game. Time away from the game will recharge your creativity and new ideas and adventures will flow.

There were a number of questions about what makes a great campaign and how a group can increase their chances of putting one together. It can be an elusive thing to capture, and even the best campaigns on paper can fall apart during play. Far too often we approach the creation of a new campaign using more instinct than skill.

Campaigns are made of several layers: players, characters, setting, story, and mechanics. A great campaign is one where the group (GM and players) connect well with every layer: the players are a cohesive group, the characters are engaging and interesting, the setting is compelling and enticing, the story is exciting, and the mechanics are enjoyable and support play. Sounds easy, right? We all know its not. Miss a layer or two and flaws form in the campaign that will eventually cause it to fizzle. By knowing that you have to hit on each of these levels, we know to account for each level as we assemble a new campaign.

Another piece of advice with regards to this topic is to cut your losses. If a campaign is not working, don’t waste time trying to fix it, unless the fixes are minor. End the campaign and move on. There are thousands of games out there to play, and an infinite number of story and setting ideas. Dust yourself off and try again.

The best part about talking with other GM’s is that everyone learns something, and GMing is a craft that requires practice for continual growth. We should seek opportunities to learn from our peers, gain wisdom from those more experienced, and entertain the wild ideas of those less experienced. It is through those interactions that we grow and learn.

If you went to Gen Con, what GMing advice did you learn? If you were unable to attend, what advice above resonates with you? What advice can you add?