Two Ways to Do Hidden Checks 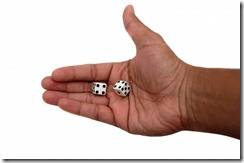 In all games there are times when it is important for a character to make some kind of skill or attribute check where it would be more dramatic if the player (and the rest of the table) did not immediately know the outcome of the result. As a GM I have handled this a number of different ways during my time behind the screen, and today I am going to describe two of my favorite techniques for making hidden checks at the table.

“I think I just failed a Spot check.” -Belkar Bitterleaf (Order Of The Stick)

Every gaming table has had a moment like Bekar’s, where the GM calls for a roll to determine if the player sees something, knows something, hears something, detects a trap, etc. The act of calling for the check has now alerted all the players that something important has happened, and if the player fails the roll, then the table is aware that they have missed something important. A disciplined group will play on, pretending to be unaware of the check and its failure, but even at the subconscious level the minds of the players want to take action or at least ready themselves for what is coming.

The old school solution for this was for the GM to make secret rolls on behalf of the players.Â  Not every group is cool with this for a few reasons: The first, is the GM needs to keep copies of the character sheets behind the screen, otherwise asking the player for his skill level and then making a roll defeats the purpose. This just adds to the pile of papers and work the GM is already doing during the course of the game. The second and more controversial is that the GM makes a skill check for the player, and the player has no control of their fate.Â  If the GM’s dice suck (technical term:Â negativelyÂ player biased) the players become victims to the outcome of the GM’s roll.

I have always been sensitive to the second issue, having been on the receiving end of some poorly rolled secret GM checks, resulting in several dead characters. Because of that, I hate to make rolls on behalf of my players. If my roll blows a player’s spot check, and the resulting ambush or trap kills one or more players, I feel that, that is on my hands. Because of this, I have tried to come up with two ways to empower my players to make the roll, but to conceal the outcome until the most dramatic moment.

Technique: In this case, I create a matrix: numbers by players.Â  The numbers column is typically the same as the main dice rolling technique for the game ( 20 for D&D and Pathfinder, 12 rows for Conspiracy X, 20 for Corporation, etc).Â  At the start of the game,Â  I have the players then take the main die and roll and log the results in their column. The end result is there is a table of random numbers for each player. Then when the GM needs a check, I can either have the player roll or I can roll, consult the table to find the player’s roll.

What I like about this technique, is that the technique combines the players rolls, with the ability for the GM to make a secret roll when needed. I have also used this matrix for the players when I want them to make a skill check, that is not a secret, but I don’t want them to know the outcome (such as knowledge check). I have the players make a roll, and then I find the number on the table, and determine the outcome of the check.Â  This is great for things like Gather Information, Knowledge Checks, and Spot checks.

Technique: In this case, there is a roll that needs to be made, where the outcome will have an effect on an upcoming scene, such as a hacking check to plant a virus in the security system so that later in the day the system goes offline during the robbery. The player is aware of the need to make the check, and the action for the check is done in an early prep scene. It is more dramatic not knowing the outcome before the scene where the outcome comes to fruition. What I like to do for these checks is to have the player place their dice in a dice cup, shake, and then flip the cup upside down on the table, and leave it.Â  Then at the appropriate time during the game, Â when the outcome needs to be known, the player lifts the cup and reveals the roll.

What I like about this technique is that the player makes the roll, but the cup hides the outcome from everyone (including the GM), at the table. There is a real tension with the covered dice sitting on the middle of the table. Sometimes if a GM knows the outcome of a secret roll, they can consciously or unconsciously narrate the scene around the known outcome, before the outcome is revealed to the players. By the outcome being concealed from everyone, the GM cannot affect the story and everyone at the table shares in the reveal of the dice.

Hidden checks are always tricky. They can sometimes break the fourth wall at the table, and how they have been handled have become a cliche at times. Despite their negatives, they are necessary in the course of the game. They create that tension and drama that brings enjoyment at the table for both player and GM. Techniques that can hide the outcome of a roll but empower players bring the best of both worlds.

How do you handle hidden rolls at your table? What techniques do you use the most?

18 Responses to Two Ways to Do Hidden Checks